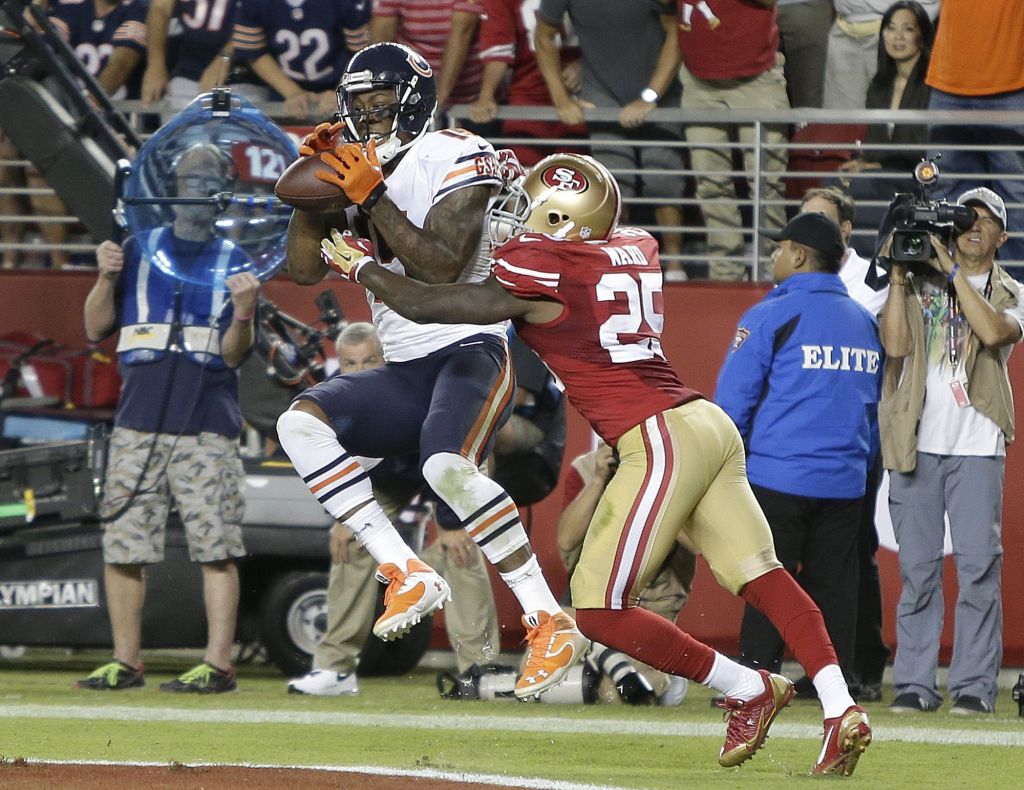 SANTA CLARA, Calif. (AP) — Down big, Jay Cutler kept his poise on the road while Colin Kaepernick struggled in prime time.
Cutler passed for three fourth-quarter touchdowns after much of Chicago’s starting defense went down, and the Bears beat the San Francisco 49ers 28-20 Sunday night to spoil their Levi’s Stadium debut.
Cutler threw three TD passes to Brandon Marshall, two in the wild fourth quarter, as Chicago erased a 13-point deficit and quieted the sellout crowd. Cutler threw for two scores in a 27-second span early in the final period, aided by the gutsy play of a backup cornerback.
Kyle Fuller made two late interceptions for the depleted Chicago secondary, and the first set up the go-ahead score.
Kaepernick was hit with an unsportsmanlike conduct penalty for “inappropriate language” following Fuller’s first big play. That gave the Bears first-and-goal on the 3, and Cutler threw a 3-yard TD pass to Martellus Bennett as the Bears went ahead 21-20.
Kaepernick threw three interceptions in all, lost a fumble and his cool, a far cry from his breakout start on the Monday night stage nearly two years ago in a rout of the Bears. Cutler sat out that night with a concussion.
A sloppy game filled with 26 penalties — 16 by the Niners — and a crazy collapse overshadowed the fanfare of the regular-season debut for the sparkling $1.2 billion stadium.
The Bears (1-1), in a stretch with six of eight games on the road, go home with some serious momentum despite injuries on both sides of the ball.
Five key defenders are hurt: cornerbacks Sherrick McManis (quadriceps) and Charles Tillman (triceps), defensive end Trevor Scott (foot), safety Chris Conte (shoulder) and defensive tackle Jeremiah Ratliff (concussion).
The 49ers (1-1) had a 17-7 halftime lead, but missed an opportunity to grab an early lead in the NFC West after the defending Super Bowl champion Seattle Seahawks lost earlier in the day at San Diego.
Michael Crabtree caught a touchdown pass on his 27th birthday and Frank Gore ran for a score but also had his 54-yard TD burst negated by Anquan Boldin’s costly holding penalty.
Cutler helped the Bears get on the board with a 25-yard run late in the first half. He took a jarring hit from Quinton Dial with 56 seconds remaining, but stayed in the game and threw a 17-yard touchdown pass to Marshall, who made a leaping, one-handed catch to pull the ball into his body as he fell into the end zone.
What a way for Chicago to forget that bitter 23-20 overtime loss to the Bills at home in Week 1.
San Francisco didn’t give the ball away once in a season-opening win at Dallas.
In the first half, the 49ers outgained Chicago 197-93 and out-penalized the Bears 10-7 for 85 lost yards. The much-scrutinized field featured visible chunks of loose sod after new grass was laid for a third time since April.
Kaepernick made his first career start against the Bears nearly two years ago, and then held onto the No. 1 job over Alex Smith. Cutler didn’t face the 49ers during a November 2012 Monday night game at Candlestick Park.
A concussion to now-Chiefs QB Smith thrust Kaepernick into the spotlight that night, and he threw for 243 yards and two touchdowns as the Niners pounded the Bears 32-7.
The 49ers were embarrassed at home for the second time in a month. They lost 34-0 in a rout by Denver in the first preseason game in the new stadium.
Chicago’s patchwork offensive line looked shaky early with center Roberto Garza and left guard Matt Slauson each sidelined by ankle injuries.
San Francisco tight ends Vance McDonald (knee) and Vernon Davis (ankle) were hurt as the 49ers lost a home opener for the first time under fourth-year coach Jim Harbaugh.
———
AP NFL websites: www.pro32.ap.org and www.twitter.com/AP—NFL