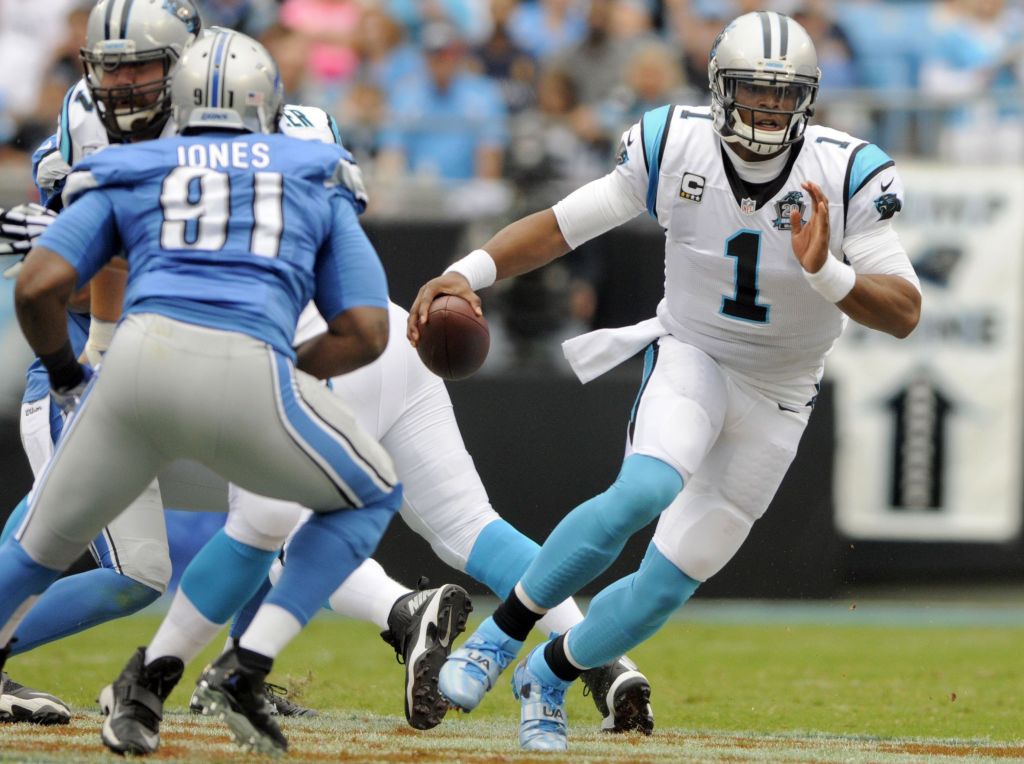 CHARLOTTE (AP) — Cam Newton showed he has no intention of changing the way he plays the game.
The fourth-year quarterback shook off some early rust and returned to his fearless style of play, helping Carolina defeat the Detroit Lions 24-7 on Sunday, capping a distraction-filled week for the Panthers.
In his first start since fracturing his ribs in a preseason game, Newton threw for 281 yards and a touchdown and ran for 19 yards on four carries, He helped the Panthers improve to 2-0 for the first time since 2008 and grab sole possession of first place in the NFC South.
Newton shook off a slow start and completed 22 of 34 passes and overcame five sacks.
“I felt like I was getting antsy early on and that comes from a lack of playing time,” Newton said. “… I was getting my feet back under me and as the game went on I started feeling more comfortable and it showed.”
Wearing a thick flak jacket, it took a while for Newton to find his stride.
He scrambled from the pocket on one second-quarter run and dived headfirst instead of sliding. It was similar to the play against New England on Aug. 22 that left him with cracked ribs and sidelined him for the season opener against Tampa Bay.
Later in the fourth quarter Newton ran again, turning the corner inside the 5 and diving toward the pylon.
“He is obviously going to be sore,” Panthers coach Ron Rivera said. “He can’t help himself (and) he ran a couple of times. He did the best he could with it. The thing that I’m pleased with is once he got the rust off he settled down and made some really good decisions.”
The Panthers had three takeaways, four sacks and held the Lions scoreless in the first half one week after Matthew Stafford and company put up 35 points against the Giants. Mario Addison helped fill the void left by Hardy with 2 1/2 sacks, and cornerback Antoine Cason had 10 tackles, two forced fumbles and a recovery.
The Panthers were a plus-3 in the turnover battle for the second straight week.
“We turned the ball over too many times, particularly in scoring territory,” Lions coach Jim Caldwell said.
The Lions (1-1) took a 7-6 lead early in the third quarter when Stafford connected on a 1-yard touchdown pass to fullback Jed Collins, who bowled over NFL Defensive Player of the Year Luke Kuechly en route to the end zone.
But the lead was short-lived.
Newton bounced back, leading the Panthers on an eight-play, 72-yard drive, connecting on his first TD pass of the season, a 14-yard strike to Jason Avant on a slant route.
Thomas DeCoud tipped a deep ball from Stafford and Melvin White intercepted to set up Carolina’s next score. Rookie wide receiver Kelvin Benjamin, who struggled with dropped balls all day, hauled in a one-handed grab along the left sideline. Jonathan Stewart capped the drive with a 2-yard run and Newton threw to Jerricho Cotchery for a 2-point conversion to put Carolina up 21-7.
The Panthers put the game away in the fourth quarter when Jeremy Ross fumbled a kickoff that kicker Graham Gano recovered. Gano added his third field goal of the game for the final score.
The Lions failed to take advantage of their scoring opportunities in the first half, setting the tone for the game. Rookie Nate Freese missed two field goals, Joique Bell fumbled in Carolina territory and Johnson dropped a potential TD catch.