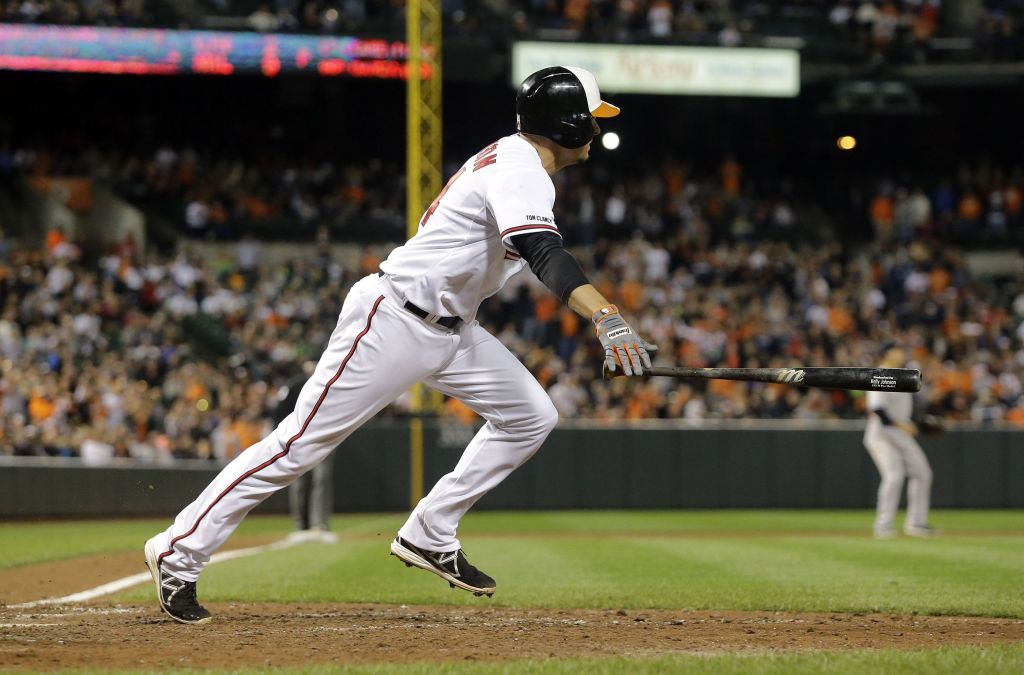 BALTIMORE (AP) — It didn’t matter that David Robertson had already pitched two days in a row. The New York Yankees desperately needed to preserve a ninth-inning lead, and their closer insisted he was capable of doing the job.
So Robertson got the call, and after he blew the save opportunity in a 3-2 loss to the Baltimore Orioles on Sunday night, the right-hander made no excuses.
“I just wasn’t able to do it today. I just stunk,” he said. “It’s not how I felt. It’s just how I pitched.”
Called upon after Brian McCann homered off Darren O’Day (5-1) in the top of the ninth, Robertson (2-5) gave up three doubles in the bottom half.
Nelson Cruz opened with double, and pinch-runner Quintin Berry scored on Steve Pearce’s liner into the left-field corner. One out later, Kelly Johnson — a former Yankee — delivered the game-winner into the gap in right-center.
Baltimore celebrated its seventh win in eight games by crowding around Johnson at second base.
Martin Prado homered for the Yankees, who lost three of four to the Orioles and dropped five games behind Kansas City in the race for the second wild-card spot.
Yankees manager Joe Girardi had no regret about inserting Robertson, who had converted 36 of his 39 save chances before this one.
“I talked to him today and he said he felt OK,” Girardi said. “That’s unfortunate. He’s been great for us all year.”
Dellin Betances struck out two in the eighth inning to raise his total for the season to 130, tied with Mariano Rivera for most by a Yankees reliever.
But Girardi never considered using Betances in the ninth.
“No, no. Absolutely not,” he said.
Yankees shortstop Derek Jeter was honored and showered with gifts before his final game at Camden Yards. The 40-year-old Jeter, who will retire after this season, went 0 for 4 and is hitless in his last 24 at-bats.
His slump is indicative of the Yankees’ hitting woes of late. Second baseman Stephen Drew interrupted a 2-for-35 skid with a fifth-inning bunt, and New York scored only six runs in the four-game series.
Orioles starter Chris Tillman gave up one run and five hits in 6 2-3 innings, his 19th consecutive start in which he allowed three runs or fewer.
Yankees right-hander Hiroki Kuroda limited Baltimore to one run and six hits over seven innings.
Any number of Orioles wins and Toronto losses totaling three will give the Orioles their first division title since 1997.
Pearce and Johnson aren’t the most notable names on a team with Adam Jones, Nelson Cruz, J.J. Hardy and Nick Markakis, but on this club, virtually everyone contributes.
“That’s the beauty of a team,” Jones said. “Everyone gets at-bats, everyone gets an opportunity to do something. When an opportunity arises, big bats come through.”
TRAINER’S ROOM
Yankees: C Francisco Cervelli, who’s missed 13 straight games with cluster headaches, could return in the next day or two. He says he hasn’t experienced symptoms in about a week and has been catching in the bullpen.
Orioles: In order to stay healthy for a possible playoff appearance, suspended 1B Chris Davis will head to Sarasota soon to work out at the team’s spring training facility. Davis began a 25-game suspension on Friday for amphetamine use.
UP NEXT
Yankees: New York sends Chris Capuano (2-3, 4.90 ERA) to the mound against Tampa Bay, a team the Yankees beat twice in New York last week. The Yankees have won each of Capuano’s last four starts.
Orioles: Wei-Yin Chen (15-4) seeks his first career win against the Blue Jays in the opener of a three-game set. The lefty is 0-2 with an 8.10 ERA in two starts against Toronto.