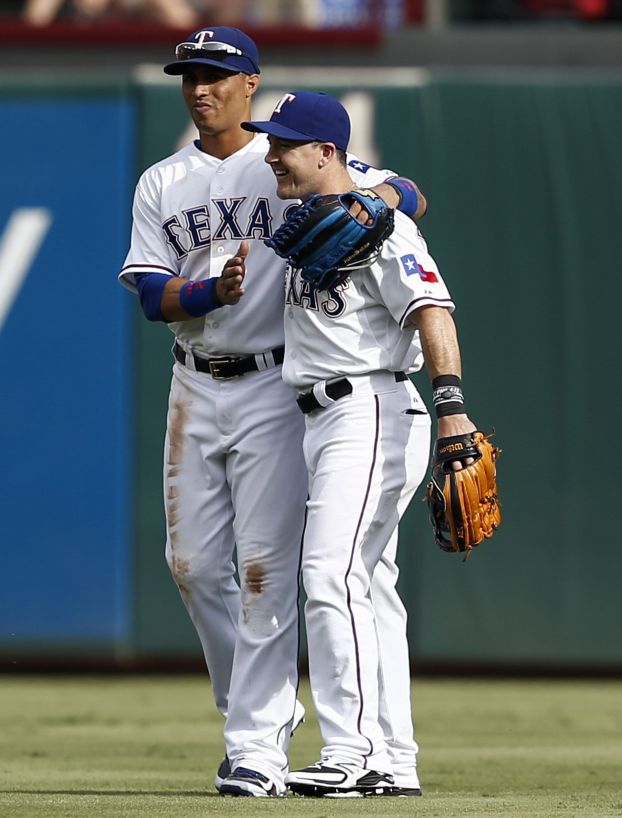 ARLINGTON, Texas (AP) — Manager Fredi Gonzalez and the Atlanta Braves have every reason to start worrying about their playoff chances.
With two weeks left in the regular season, they are slumping at the wrong time.
Colby Lewis pitched seven innings for his 10th victory, Luis Sardinas doubled his career total with four RBIs and the last-place Texas Rangers finished off a three-game sweep with a 10-3 win Sunday.
“It happens. In April or May, you’re not too worried about it,” Gonzalez said. “The second week of September, games are running out and you start to worry about it. It’s not a real good feeling. We’re putting ourselves up against a wall.”
The Braves were swept in their first visit to Texas since 2008, completing a 2-7 trip. That put them four games behind Pittsburgh for the National League’s second wild card and 1 1/2 games behind Milwaukee with 13 games left.
The good news is they are home for their next 10 games. The Braves open a three-game set on Monday against NL East-leading Washington, which beat the New York Mets 3-0 on Sunday to stretch its division lead to 10 1/2 games over Atlanta.
The Braves’ magic number for elimination in the division race is four.
“I still feel like we’re a good team and we’re going to bounce back,” left-hander Mike Minor said. “There are still games left. We still have a chance. I think everybody thinks the same way.”
Minor (6-11) lost his third consecutive September start, allowing five runs and eight hits while throwing 107 pitches in 4 2-3 innings.
“I pitched pretty badly. The sinkers I usually throw were off today,” Minor said. “The curveballs I did throw well, they’d foul off.”
The Rangers scored six times after Minor retired the first two batters in the fifth. It was 10-0 in the seventh when Ryan Doumit connected for a solo homer off Lewis (10-13).
The only other series sweep for Texas this season was April 21-23 in a three-game set at Oakland. The Rangers still have to win at least six of their last 13 games to avoid 100 losses.
Michael Choice put Texas ahead to stay with an RBI triple in the second. He added a two-run double in the fifth on a play when he strained his left hamstring running the bases and left the game. An MRI was planned for Monday.
Sardinas, the switch-hitting rookie infielder who had four RBIs his first 35 games, drove in runs in three consecutive innings. His two-run double in the sixth made it 10-0.
“It feels great to help,” Sardinas said. “I’ve been playing good defense, but being able to help also on offense is important.”
FREEMAN STREAKING
Braves 1B Freddie Freeman had his 41st double in the first inning, extending his career high. That stretched his hitting streak to 10 games. He also walked and has reached base in 30 consecutive games.
FOUL FANS
Rangers 3B Adrian Beltre spent some time in foul territory, making two nice plays on foul pops.
In the fifth inning, Beltre ran to the waist-high wall beyond the dugout and leaned into the first row of seats to make a backhanded catch as two men wearing Braves shirts reached for the ball — which deflected off the fingertips of one of them. Gonzalez came out and briefly conferred with third-base umpire Bill Miller, but there wasn’t a replay challenge.
In the second, Beltre made a lunging underhand scoop on Doumit’s popup along the screen fronting the Braves’ dugout.
TRAINER’S ROOM
Braves: Dallas-born C Evan Gattis missed his sixth consecutive game since being diagnosed with strep throat.
Rangers: RHP Miles Mikolas (shoulder soreness) didn’t feel good after playing catch and likely won’t pitch again this season.
UP NEXT
Braves: RHP Ervin Santana goes for his 15th win Monday when Atlanta begins its homestand against the Nationals.
Rangers: After their last scheduled day off of the season, the Rangers begin their final road trip — three games at AL wild-card contender Oakland starting Tuesday, and then a three-game set at the AL West-leading Los Angeles Angels.