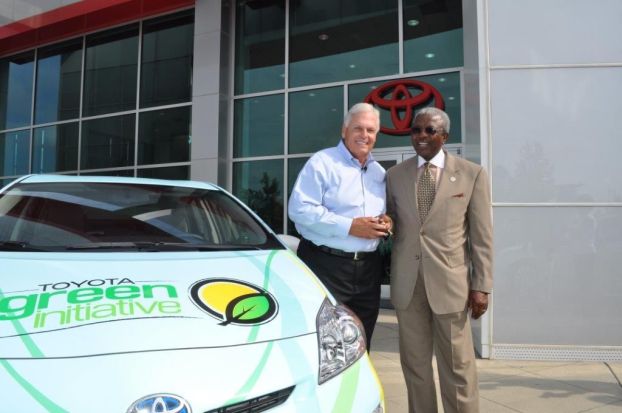 Livingstone gets use of Toyota Prius for year

CONCORD — In an initiative designed to promote environmental sustainability, particularly among the nation’s historically black colleges and universities, Livingstone College received the keys to a brand new Toyota Prius Thursday morning.
The keys were handed over during a festive event at Hendrick Toyota Scion Concord that featured members of the college’s marching band and its cheerleaders.
It’s all part of The Toyota Green Initiative, which was launched in 2010 by Toyota Motor Sales U.S.A. and aims to educate students and alumni of historically black colleges and universities about the benefits of adopting and maintaining sustainable lifestyles.
Toyota is donating 22 Toyota Prius Liftbacks to schools in the Central Intercollegiate Athletic Conference and Southwestern Athletic Conference for use for one year.
“Livingstone has been a partner with us in environmental sustainability,” Jim Colon, vice president African-American Business Strategy Group, said while standing outside Hendrick Toyota Scion Concord Thursday morning. “The students are learning there are different things they can do.”
This isn’t the first time Livingstone College has partnered with Toyota in a sustainability endeavor. In 2011, Toyota officials visited Livingstone to drop off a Toyota Prius for Stephen Graddick IV, who’d won a contest sponsored by the automobile maker in conjunction with the CIAA Tournament. Graddick beat out more than 200 students in the contest that challenged them to devise an innovative plan to make their college or university more environmentally friendly. Because he was the grand prize winner, Graddick got the use of a Prius for one year, and several trees were planted on the college’s front lawn.
Livingstone College students have also served as Toyota Green Ambassadors while representing the institution.
Before concluding his remarks and giving the Prius keys to Livingstone College President Dr. Jimmy R. Jenkins, Sr., Colon said, “Good driving, be safe and buckle up.”
Jenkins assured Colon and others assembled, including Hendrick Automotive Group Chairman Rick Hendrick, the car would be put to good use and was in good hands in Livingstone’s care.
“We believe in this because without a safe and conducive living environment, we cannot survive,” Jenkins said. “We’ll use this automobile on campus, rewarding students, staff and faculty for green initiatives.”
In an interview, Donnie Moore, general manager of Hendrick Toyota Scion Concord, said the partnership between Livingstone and Toyota Motor Sales U.S.A. is “great for the campus, great for the community and great for Toyota.”