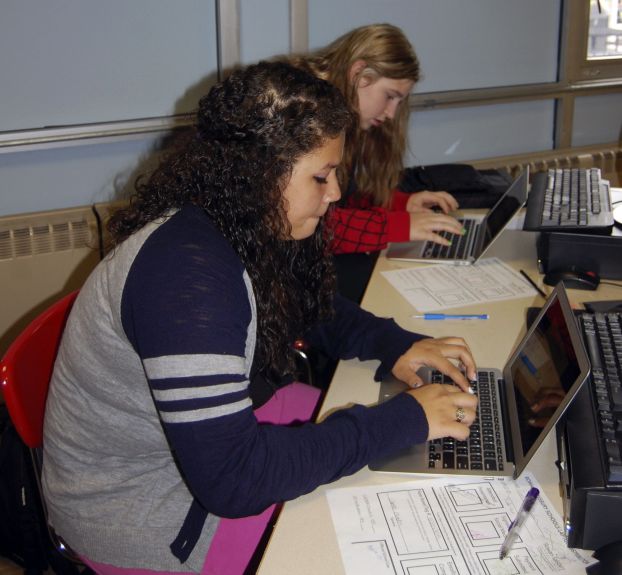 The second phase of the Rowan-Salisbury School System’s one-to-one digital conversion is complete.
“I was really excited that we were going to get to move forward and use technology,” said Austin Chrismon, a sophomore at South Rowan High School.
Teachers received 1,420 MacBook Air laptops at the beginning of summer break, and as of Thursday, 5,511 Rowan-Salisbury high school students have laptops to use at school and home throughout the school year.
That’s roughly 90 percent of the district’s high schoolers.
“We’re really excited about that data,” said Andrew Smith, director of digital innovation, adding that he expects to see that number “creep up” over the next few weeks.
Students who don’t yet have their laptops could have been absent on their school’s rollout day, or might not have met the requirements to receive their device.
In order to get their laptops, students have to do three things, Smith said.
They have to attend a presentation with a parent about how to use the device properly and about the district’s responsible-use policy, sign the responsible use policy and pay a $50 technology fee.
“Once they do all those things, then they can get their laptop,” he said.
Smith said school administrators are “making personal contact” with the students who were unable to receive their devices to figure out why they haven’t met the requirements.
If it’s a scheduling conflict with the presentation, principals will work with the parent and student to make sure they can watch a video of the presentation at a time that works well for them.
If the fee hasn’t been paid, Smith said principals will try to figure out why that is. If a family can’t afford the fee, the principal will work to set up a payment plan or some other way to help the family overcome that hurdle.
“We’ve done a lot of work with our parents to make that possible for all of our students,” Smith said.
If, for some reason, a student or family were unwilling to meet the qualifications, the student would be allowed to use a device at school, but would not be able o take the device home.
He added that, considering the district’s free and reduced lunch numbers, the current 90 percent number is “pretty amazing for our first year.”
Smith said the laptop deployment process “went beautifully.”
Deployment began with Rowan County Early College on Aug. 7. Schools on a traditional schedule started on Aug. 26 and typically ran every other day to allow staff to prepare for the next school’s deployment and to resolve any issues from the day before prior to moving on to a new school.
Smith said the deployment process evolved throughout the three-and-a-half week process.
The laptops were unboxed to their final packaging in order to make them more concise and condensed and then were delivered to the schools.
To start out with, all the students would gather in a central location in the school to get their devices. After a couple of schools, however, they found it was more efficient to bring the devices to the students in individual classrooms.
The deployment team would then disperse amongst the classrooms and help the students set up their devices.
Each classroom had roughly 20 students and took roughly 30 minutes, allowing the team to deploy between 200 and 250 laptops each hour.
Smith said going to the students worked well, and even the district’s largest schools were done by 1 p.m.
“We were just pleasantly surprised with how well behaved all the students were,” said.
“It went better than I thought it would,” Chrismon said. He added that his classroom didn’t take very long at all.
Smith said the technology department is in the process of beginning discussions with the district’s middle school principals about the middle school iPad deployment, and they hope to begin that process in November or December.
“It sounds like we’re going to be taking a break, but we’re really not,” he added.
In addition to preparing a deployment strategy, the technology department will also be preparing for a buyback program through which community members can purchase the school system’s old devices.
The sale will put “pretty good technology in the hands of our community at a pretty good price,” he said.