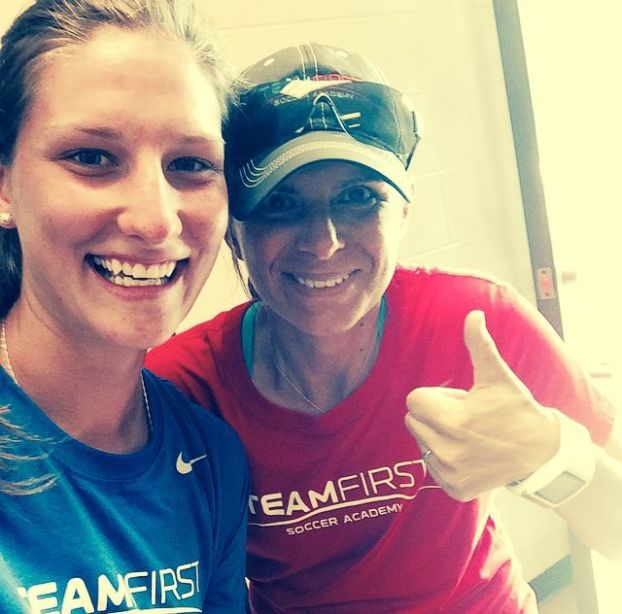 “What do you do when Mia Hamm is dribbling at you?” Karen Presnell asked.
“And Kristine Lilly is making a run?” Allison Parker added.
Those are the questions that faced Parker, Presnell and Allison Baucom during a pick-up game with Hamm, Lilly, Tisha Venturini Hoch and a host of other talented women’s players in late July at the Team First Soccer Academy camp in Concord. It was a match between the local counselors and the traveling coaches.
The answer, by the way, was to steal the ball. Then Parker faced the conundrum of whether to just give it back.
Baucom joked that the score of the pick-up game was 23-2. Presnell, a forward for the Indians, scored a goal in that game. Parker, Presnell and Baucom all said they stole the ball from Hamm, the face of women’s soccer in the 1990s and early 2000s and a player all three admired.
“That’s who I wanted to be when I got older,” Parker said. “I had Mia Hamm posters. I got her book. If Mia Hamm’s name was on it, I tried to get it.”
The Team First camp was for players ages 7-13, and it came on the heels of the Indians’ camp on the Catawba campus. It was three days of working with stars who paved the way for the growth of women’s soccer in the United States.
Hamm, Lilly and Venturini Hoch played together on the national team. All three were members of the team that won the 1999 Women’s World Cup in the Rose Bowl on a sunny Sunday afternoon in Pasadena, California. Hamm and Lilly rank second and third, respectively, and first and second, respectively, on the all-time lists for career goals career assists.
There were plenty of memorable moments.
On the camp’s first day while everyone was getting introduced to the campers and counselors, Parker and Baucom told Presnell to put on her get-to-know-your-coach sheet that she can beatbox. In front of a group of young players and titans of the sport, Presnell displayed her talent while Venturini Hoch freestyled. One day, they ate Chick-fil-A with Hamm. Presnell called it the “best day ever.”
While there were a fair share of laughs and levity and moments to be starstruck, it was also a learning experience for the campers and the three Catawba players.
“It focused on the fundamentals of soccer,” Baucom said. “It was cool because the whole time I was thinking, ‘This would be awesome for them to do for our team as a college,’ because it’s all stuff you can improve on. It’s the fundamentals of soccer, the things that are the basics. Even though I wasn’t completely participating, I was still being made a better player just by watching them do stuff.”
Baucom, a left back, said there was a lesson about the proper body position for defending.
“I had to do a lot of coaching,” Parker said, “but Mia, Christine and Tosh were always the ones out there coaching, and if I had a question about something, they’d be , ‘Oh yeah. Do this. Do this. Do this.’”
There was also a serious conversation with Hamm about the best type and brand of running shoes. The pick-up game gave all three players a glimpse into the personality and competitive nature of Hamm, Lilly and Venturini Hoch.
“I almost felt bad for scoring because you could see on their faces, ‘Oh I’m going to come score on you now,’” Parker said. “It was just a tuck-my-tail-between-my-legs kind of thing.”
The tenor of the conversation about running shoes and the attitude during the pick-up game were teaching moments as well.
“I guess that’s been the lifestyle for Mia since she was 13 years old,” Baucom said. “The will and the want to be the best, to have the best, and to the do the best.”
The three days with the icons of women’s soccer, however, wrapped up with another moment of levity provided by Presnell. Before leaving, Hamm took pictures with counselors and coaches before traveling to their next stop.
It was a Sunday. Selfie Sunday.
“I was just getting a picture with her, and I was like, ‘Uh Mia. It’s Selfie Sunday,’” Presell said.
“I pull out my phone. She’s like, ‘Oh yeah. Selfie Sunday.’ She just smiles, and we pose for it, and it was really awesome.”