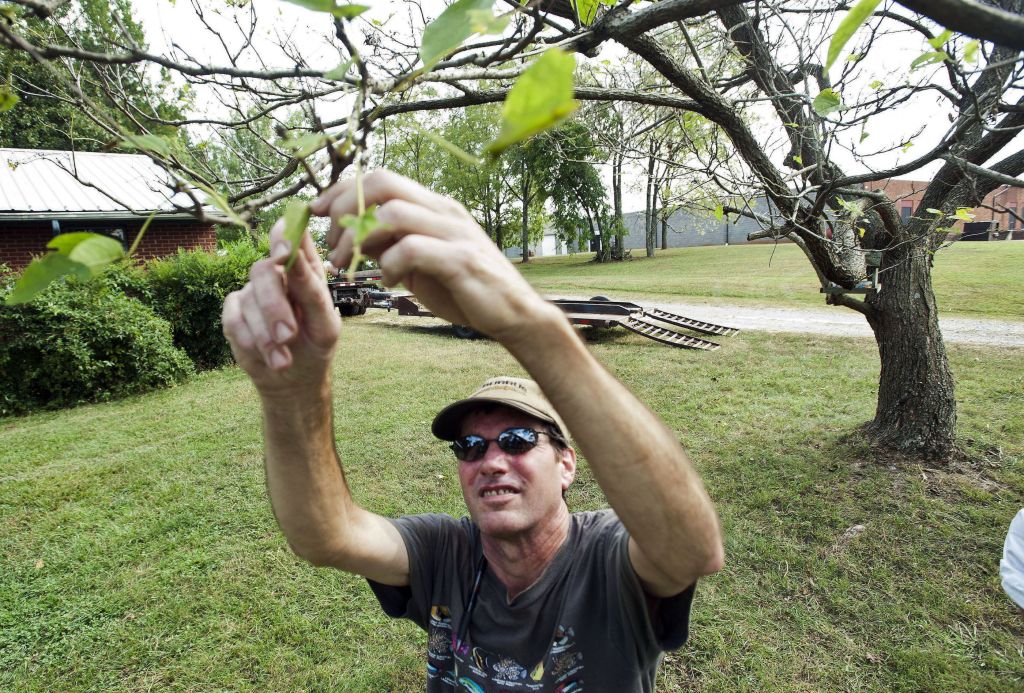 LINWOOD — Ask any Southern fisherman worth his salt, and he’ll tell you the best thing about a catalpa tree are the “worms” feeding on the underside of its leaves.
“Catfish and bass hit them quicker than anything else,” says Larry Graves, who does most of his fishing near the York Hill access area of the Yadkin River.
The worms actually are caterpillars — the larvae of the catalpa sphinx moth. Graves and others put the caterpillars on their hooks as they would regular nightcrawlers.
The grounds of Graves’ father’s house off Old Salisbury Road has two catalpa trees, often called “Catawba” trees by old-timers.
Various botanical reports on the Southern catalpa also have dubbed it “the fish-bait tree,” given how enthusiastic fishermen are to use the caterpillars.
The harvesting of the catalpa worms is pretty easy. You can spread a tarp or bedsheet under the tree, shake the lower limbs and watch them fall to the ground.
Graves picks them off the leaves, too. “They’ll latch onto everything,” he says.
This year, the catalpa in his father’s front yard was filled with the caterpillars, which have virtually stripped the tree bare of leaves. While mowing on the last week of August, Graves noticed how it was loaded with the larvae.
The other catalpa, which is in a side yard, didn’t have any of the caterpillars and has not been defoliated.
“This year, I got right at 400 off the one tree, and it probably had 1,500 on it,” Graves says.
Last year, there were hardly any “worms” at all on either tree. Graves thinks the good production this year might have to do with the milder summer.
ggg
The more you hear about the Southern catalpa, the more amazing it is. Even though the tree that was laden with caterpillars now looks dead, thanks to the eating the worms did, it likely will come back with full foliage next spring.
“Different individual catalpa trees have different reactions to moth larvae feeding,” research from the University of Georgia says. “Some trees are consistently not attacked. Other trees are heavily defoliated almost every year.”
Graves freezes the caterpillars he doesn’t immediately use as bait. They can last up to about a year being frozen and still bounce back to life.
For purposes of this story, Graves defrosted a bag of the caterpillars. “They’ll probably start moving here in about an hour,” he promised, and he was right.
Under the tree which is now almost bare, Graves points to some remaining leaves with larvae still eating away.
Wasps are a natural enemy to the larvae. If wasps lay eggs on the caterpillars, the caterpillars usually die. Graves points to several examples of wasp eggs on the worms.
Full-grown caterpillars are about 3 inches long.
ggg
The University of Georgia’s report on catalpa says the larvae molt five times within a three- to four-week period, and the last molt creates a reddish-brown pupa without a cocoon.
That pupal stage falls from the tree to the ground, mixing with the soil. In two weeks, a catalpa sphinx moth emerges.
The catalpa tree is the only host for the catalpa sphinx moth.
Graves puts the age of the catalpa trees in his father’s yard at 35 to 40 years. He thinks it takes at least 10 years before catalpa trees become attractive to the moths — that is, the worms.
The Southern catalpa is a small- to medium-sized tree with distinctively long beans or fruit dangling from the end of twigs. This fruit looks like pencils or cigars and can be as long as 16 inches before it dries and splits to a brown color.
The catalpa likes moist, clear areas and often grows along stream banks. Through the years, many people have planted them in their yards, mostly because they flower in the spring, or for the fish bait.
Graves sometimes takes his defrosted catalpa worms to a Lexington flea market and sells them to fisherman.
“A lot of the older people know what they are,” he says.