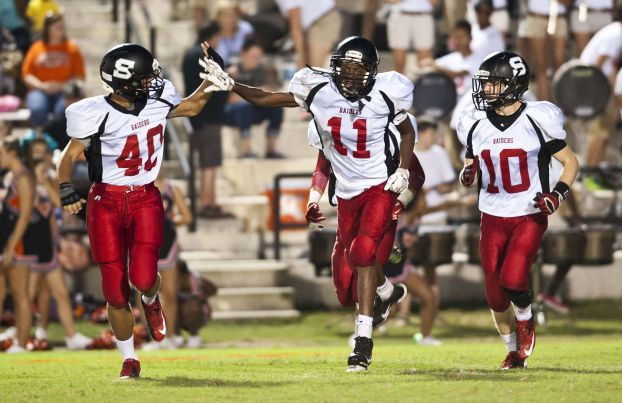 Raiders, Trojans do battle in Concord

CONCORD — Credit this victory to the South Rowan defense. The Raiders traveled to Northwest Cabarrus on Friday and went into shutdown mode when it counted to claim an 18-13 win.
The final score was deceptive given the fact that the South defense notched seven sacks, scored a rare double in safeties and held the Trojans to a mere 67 yards of net total offense for the night. They also rose up with the game on the line and stopped NWC on fourth-and-1 at midfield in the final two minutes.
“Our defense is just an amazing group of kids who have absolutely bonded,” South Rowan coach Jason Rollins said. “They are just so good at what they do.”
The win was important because it was the South Piedmont Conference opener for both teams and now the Raiders (2-1) are 1-0 atop the league standings. They defeated a longtime nemesis in Northwest Cabarrus (1-2, 0-1). The Trojans had beaten the Raiders seven out of the last eight times.
Both teams also had to endure a 30-minute lightening delay in the third period.
The Raiders’ offense did have their bright spots as junior Heath Barringer passed for a pair of touchdowns and sophomore Jamorya Cousins bulled his way for 93 rushing yards.
South Rowan had to work through a horrific start that saw them fumble on their first two possessions then fall behind 6-0 on a 25 yard pick-six by Darius Chapman at 2 minutes, 3 seconds in the first quarter.
South Rowan also was its own worst enemy with a whopping 19 penalties for 165 yards.
“When we were able to move the football we would make stupid mistakes that pushed us back,” Rollins noted. “You just can’t do that and it is so frustrating. “
The Raiders did regain the lead on the next series thanks to a 51-yard kickoff return by Trey Littlejohn down to the Trojans 9. A sack and a penalty pushed them back to the 15-yard line, but Barringer then lofted a pass into the left corner of the end zone. Senior receiver Alec Stewart rose above the defense for a leaping TD catch with just under 5 seconds left in the period for a 7-6 lead.
South Rowan wasted two golden chances in the second quarter to expand the lead but the defense was there to pick up the Raiders.
A bad snap on a punt was recovered by Brad Hager for South at the 11. But three running plays failed and Lambert missed on a 28-yard field goal. Later in the period a short punt put the Raiders at the Trojan 28. Two passes by Barringer put the ball on the Vikings’ 1 but time was ticking away. But they were unable to push it in the end zome.
But the Raider defense picked them up. On the Trojan’s first play, linebacker Burke Fulcher and tackle Alex Parham stuffed the runner in the end zone for a safety and a 9-6 lead.
South Rowan opened the second half in similar fashion as the running of Cousins moved them down to the red zone. But a fumble ended the threat at the 10. Cue the defense.
First a sack by Dylan Briggs pushed the ball back to the 1. Then runner Ali Moody was nailed in the end zone for the second safety by Jacob Eudy and a host of others for an 11-6 lead.
“Our defense is outstanding,” Fulcher said. “We put in the work all week. It is a brotherhood out there and we trust each other.”
South Rowan seemed to be in control on the first play of the fourth quarter when Barringer hit speedy Eric Stowe down the middle for a 55 yard TD pass. But Northwest responded with their only big play of the night as Kalan Chapman his Darius Chapman for a 77-yard scoring bomb. Suddenly it was 18-13 with just over 4 minutes left.
With the Trojans at midfield with 1:56 left facing fourth and one, Parham and the right side of the defense stuffed the run for no gain.
“Our defense is the key to to our team right now,” Parham said. “I am really happy about the defensive effort tonight.”

MILWAUKEE (AP) — Miami Marlins slugger Giancarlo Stanton was hit under the left eye by a fastball and bleeding from... read more