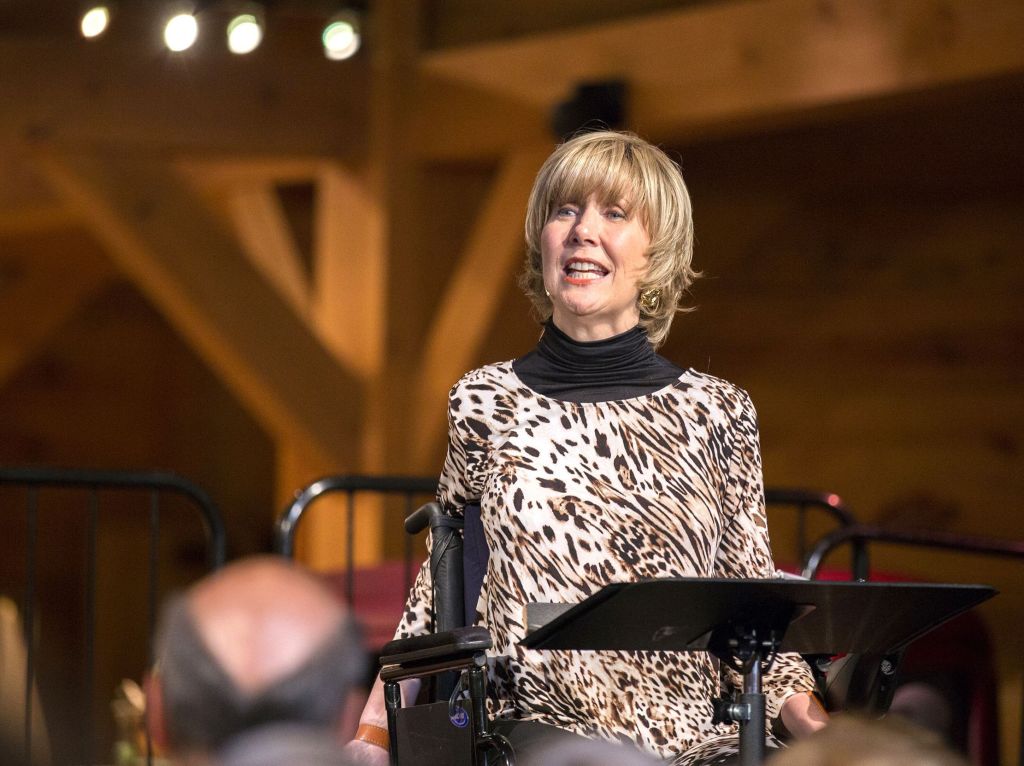 CHARLOTTE — “I would rather be in this wheelchair with God than on my feet without him.”
Joni Eareckson Tada uttered those words in a video clip before she took the stage Monday.
A quadriplegic for 47 years, Tada is an evangelical Christian author, radio host and advocate for persons with disabilities. She was at the Billy Graham Library to promote her newest devotional book, “Beside Bethesda: 31 Days Toward Deeper Healing.”
Tada, 64, zipped on stage in her motorized wheelchair, bestowing a dazzling smile on the hundreds who’d stood in the lobby more than an hour to see her.
“Look at you all!” Tada said, her blue eyes sparkling. “This is incredible! You know what this means? It means we need to sing a hymn!”
From his own wheelchair just to the left of the stage, Cliff Barrows suggested “Great Is Thy Faithfulness.” Barrows, now 91, was the longtime music and program director for the Billy Graham Evangelistic Association.
After the hymn, Tada offered a prayer, and said that following her remarks she’d be signing copies of her book.
Tada, who uses her mouth to grip a pen, joked that she wished they made chocolate-flavored pens.
After her diving accident in 1967, Tada often prayed for physical healing. The beginning verses from John 5 are significant for her: “Now in Jerusalem by the Sheep Gate there is a pool, called Bethesda, which has five porticoes. In these lay many invalids — blind, lame, and paralyzed.”
She once attended a crusade for healing.
“Come over here to where the hard cases are!” she remembered thinking. “But the spotlight never made it over to the wheelchair section.”
“What kind of healer would not hear the prayers of people with disabilities?” Tada asked.
A root of bitterness began to grow inside her, she said, and Jesus began to feel distant.
Tada said she went into her room, and told her sister to close the drapes, turn out the lights and leave her alone.
But she knew she couldn’t live like that, and offered a simple prayer, “Jesus, if I’m not going to die, show me how to live.”
The next day, she got out of bed.
Tada said that saints are Christians who suffer terribly, but the worst suffering a person can go through is separation from God.
She was dressed stylishly in a black turtleneck and pants, and leopard-print top. But the most eye-catching piece of her ensemble was a pair of large, glittery gold earrings.
A friend gave her the earrings after she admired her wearing them one day.
Unfortunately, Tada ran over one with her wheelchair. Her jeweler told her he couldn’t fix it, but could make the undamaged one look just like it.
“Suddenly, the earrings were hammered into a beautiful shape,” she said. “When suffering comes into our lives, it’s a lot of hammering, it’s a lot of suffering. But we are a new creation in Christ.”
Over the years, Tada has come to understand God’s idea of a deeper, spiritual healing.
“God is the master jeweler,” she said. “God’s idea of good is to make you more like Jesus. Sometimes that’s gonna hurt.”
Tada also spoke of the ministries offered through her organization, Joni and Friends, which serves people with disabilities. There’s a Joni and Friends office in Charlotte, and it hosts retreats for special-needs families each year, she said. “We’re always looking for volunteers.”
Of course, it would not be a Billy Graham Evangelistic Association event without an invitation to guests to accept Jesus Christ as their savior.
Tada prayed that non-believers would “bundle up that sin and place it at the foot of the cross of Christ, and then accept Jesus to sit at the foot of your heart.”
She said later, “I believe that God is getting read to bring this era to a climax. As the armies of darkness and the armies of God assemble, which side will you be on?”