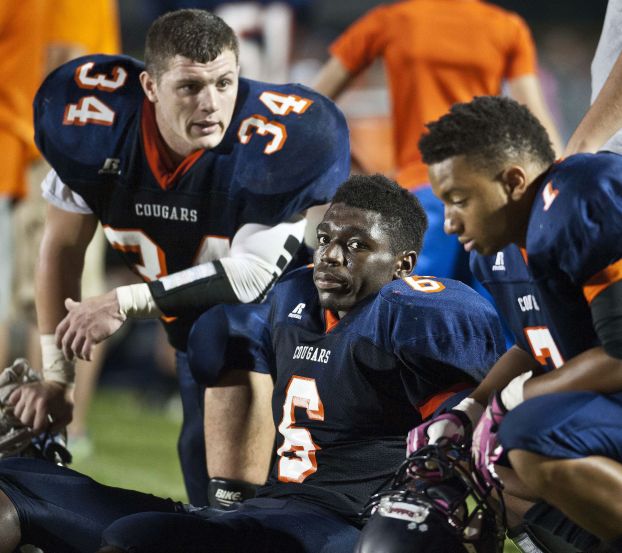 CHINA GROVE — Central Cabarrus defensive coordinator Daniel Crosby hugged family members on the field after Central Cabarrus held off Carson 28-21.
A dozen people told Crosby, “Good game” on Friday, and he had the right response.
“Too good a game,” he said. “I was worried right down to the end.”
Carson still had time and still had a chance until it misfired on its last offensive snap from the Vikings’ 48.
That was a well-designed play by coach Joe Pinyan on fourth-and-8. When Carson sent trips wide to the left, including studs Darren Isom and Brandon Sloop, the Vikings sent a bundle of people to keep an eye on them — but they were decoys. The play was supposed to come right down the middle — on a screen from QB Andy Lear to quick receiver Brandon Huneycutt, who would have an entourage of blockers in front of him.
“Brandon might’ve scored if we’d executed,” Pinyan said. “But we missed a block, and that blocker also bumped into Huneycutt right when he was catching the ball.”
That malfunction was part of a long list of Carson mistakes that cost the Cougars their SPC opener.
Carson (1-2, 0-1) also had a miscommunication on a critical fourth-and-1, threw a pick, missed a few dozen tackles, and failed to cover a Central Cabarrus squib kick that led to the decisive points.
“We never could maintain momentum and we never got to a comfortable point even when we got up on them two touchdowns in the second half,” Central Cabarrus head coach Donnie Kiefer said.
There wasn’t much room to relax on either side. Isom raced for two touchdowns and alternately danced and hammered his way for 114 yards on 13 carries.
Sloop was bottled up most of the night, but he still broke two 21-yard runs and an 18-yarder and finished with 100 yards on 16 carries.
“It was a physical ballgame, a tough ballgame, and all the Carson kids ran the ball tough,” Keifer said. “We did some good things on defense, but I thought Isom carried Carson on his shoulders tonight.
“We were hitting him in the backfield and he was still making big plays.”
Central Cabarrus (3-0, 1-0) got three short touchdown runs from Jayni Monley, but 5-foot-4 waterbug Xavier Harris, who darted for 97 yards, did even more damage for the Vikings. He was squirting right past the Cougars for gains of 10 before they ever saw him.
Monley finished a 68-yard march from the 3-yard line as the Vikings went ahead 7-0. Isom answered with a 24-yard run around the left side to make it 7-7.
The teams traded punches in the second quarter. Monley scored again, but so did Isom. Again he scored from 24 yards out, but this time it was on a cutback after the Vikings sealed the edge.
“We felt OK about 14-14 at halftime,” Pinyan said. “They were doing a good job of trying to take Sloop away from us, but we were finding some other things.”
But then came a third quarter that was disastrous for the Cougars.
Carson didn’t run its first offensive play of the second half until there was only 2 minutes, 30 seconds left in the third quarter.
By then, the Vikings held a 28-14 lead.
Central Cabarrus took the second-half kickoff and quarterback Tyler English directed a methodical 77-yard scoring drive. Then a Central Cabarrus squib landed in open space. The Vikings won the race to the ball, used the short field to score quickly and led 28-14.
Carson got seven points back with a nice 60-yard drive, fueled by Isom and capped by the punishing Sloop with 5:49 left.
Carson got the ball back again with 3:26 left, but Central got the last stop it needed to win the game.
“We put up a good fight against a very athletic team,” Isom said. “But little mistakes cost us, and that onside kick really hurt us

MILWAUKEE (AP) — Miami Marlins slugger Giancarlo Stanton was hit under the left eye by a fastball and bleeding from... read more