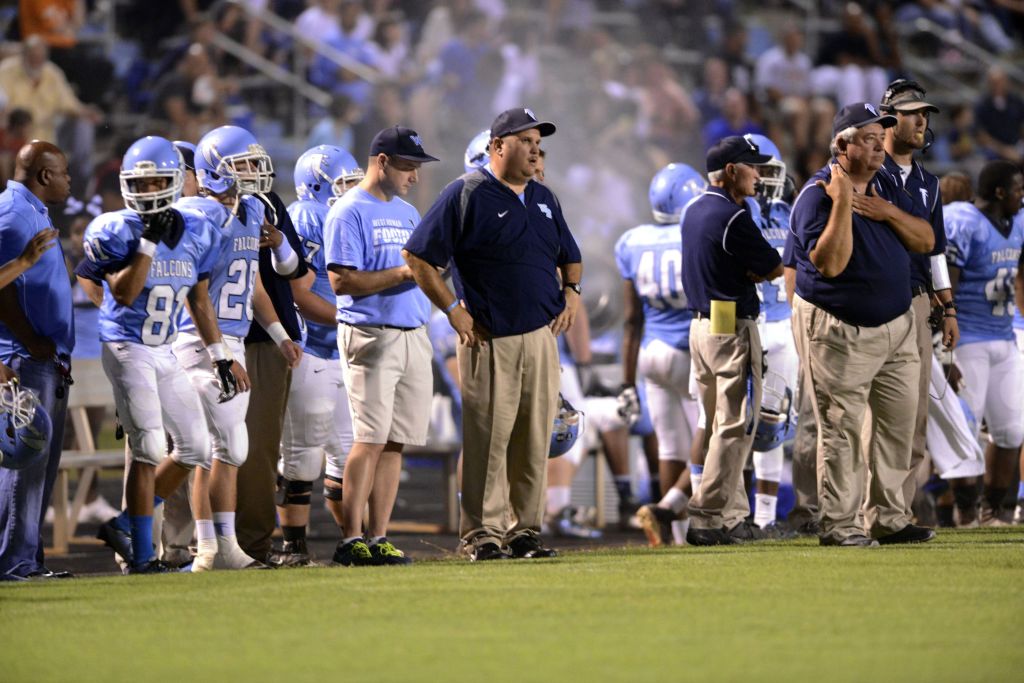 MOUNT ULLA — It’s the right time for a break for West Rowan. That’s by design. Head coach Scott Young said West Rowan likes its preseason practice to run into its nonconference schedule. Then there is a week off before the opening of the Falcons’ eight-game conference schedule.
It’s also a time to heal. The Falcons are getting over injuries to a few key players. The biggest surprise being Kortez Weeks. Young said at Thursday’s practice Weeks was in the hospital Thursday after contracting an upper respiratory infection. Shakir Simmons was sick as well.
Harrison Baucom was in a T-shirt and jeans on Thursday after going through surgery on Monday for an ingrown toe nail. Justin Evans is also dealing with an injury.
“It’s good to get rested up and go hard in practice and get ready for the next week the following week,” Baucom said.
The Falcons are coming off a 48-point blowout of Salisbury. It was West Rowan’s second straight win, but it was also a win that keeps the team moving in the right direction.
A tough pill was swallowed on the first night of the season. Mooresville beat up the Falcons (2-1) on their home turf in a 49-21 win that was not as close as the score indicates. The Blue Devils, who are still unbeaten, were able to push around — bordering on bully — the Falcons in a way that hasn’t been done in a long time.
“It was not a thing of beauty. We got handled, up front especially, unlike we have been handled in a long time,” Young said. “You have to turn back the clock more than a decade to remember the last time we got handled that easily up front.”
It was the worst home loss since A.L. Brown beat the Falcons 54-6 in 1998, Young’s first year as head coach at West Rowan.
“Our biggest thing after the loss is you got to play with a lot of heart and a lot of emotion,” running back Harrison Baucom said. “Obviously, after the loss to Mooresville it was hard to swallow. You come in, and it’s the opening week at home. You lose. But you got to continue to work and get better.”
Since that setback to Mooresville, West Rowan has been getting itself right and ready for conference play.
“I told our guys in Week 2 if we could go across the river in Davie County and upset a 4A team who had just beaten Greensboro Page and if we got back that night and saw that Mooresville beat Hough, with six Division I commitments, we’d have a chance to have a good season,” Young said. “Thank goodness for us it went exactly that way.” The Falcons returned to Mount Ulla on Aug. 29 with a 48-36 victory over the War Eagles. Mooresville whooped Hough that same night 38-7.
Last week, West Rowan steamrolled Salisbury 55-7 at home.
“We played pretty good the last two weeks, we just got to keep improving every week,” offensive lineman Jacob Radtke said.
Even with those two wins, Young still sees room for improvement in a lot of areas.
“I’m not happy with where we are, but I’m happy with where I think we’re going,” Young said.
The South Piedmont Conference is up for grabs. Every one of the nine teams has at least one win.
Concord, which is looking to repeat, had what looked like a huge opening win over A.L. Brown. The Spiders, however, had their problems in a Week 2 win over a 1-2 Mount Pleasant team. Central Cabarrus, the runner-up to Concord last year, graduated eight players. One of those eight was Kenny Purvis, who ran for more than 2,600 yards and scored 31 rushing touchdowns. Carson, which went 7-5 last season, could ride running backs Brandon Sloop and Darren Isom to a finish near the top of the standings as well.
Young said the Falcons are in the mix of contenders as well.
“We can finish top two or three,” lineman Darius Williamson said. “We all got play as a team, play hard, play fast, play physical.”