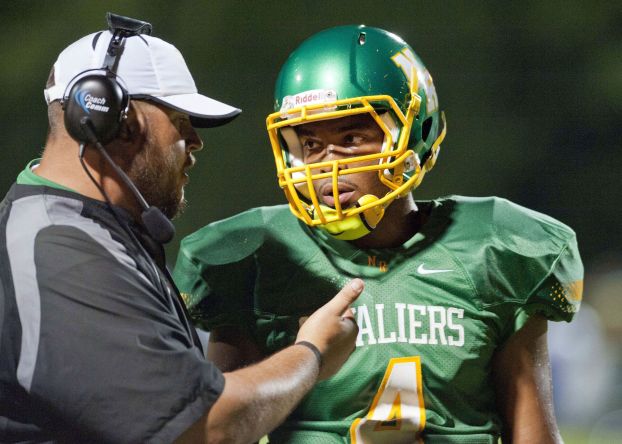 Prep football previews…
There’s lots going on this week. Here we go.
North Rowan (2-1) at Davie (2-1)
Davie’s Cade Carney rushed for 190 yards against the Cavaliers in 2013, while Davie’s defense held North Rowan star Jareke Chambers, who was playing quarterback with Alexis Archie hurt, to a season-low 32.
Yet, North Rowan won the game 28-13. Davie is throwing for nearly 300 yards per game and has scored 45, 36 and 37 points. The Cavaliers can also throw and run proficiently, so there should be no shortage of offense.
The series was resumed last year after the schools hadn’t played since the 1980s. North Rowan leads the series 16-11-1. Davie last beat the Cavaliers in 1984 when the schools were NPC rivals.
South Rowan (1-1) at Northwest Cabarrus (1-1)
Both teams open SPC play. Northwest Cabarrus lost to West Stanly and squeaked past Robinson in its first two outings. Both teams have circled this game as one they have to win if they’re going to be a factor in the league.
Northwest Cabarrus’ 35-25 road win against the Raiders last season was hard-fought.
Northwest Cabarrus has won six of the last seven meetings, but South Rowan, which beat the Trojans 10 straight times from 1988-97, still leads the series 20-11,
South Rowan has had an awful time against Northwest Cabarrus in recent years. Even South Rowan’s good 2000 and 2009 teams lost to the Trojans.
Cox Mill (1-2) at East Rowan (1-1)
Another opener in the nine-team SPC.
The margin in this matchup last season was a blocked PAT by the Mustangs’ Shiheem Saunders that keyed a 21-20 victory. That PAT, as it turned out, was the difference between East Rowan making the playoffs — and Cox Mill not making it.
East Rowan leads the series 2-1. Cox Mill won in 2010 when the teams were in different leagues.
Cox Mill often plays wild games, including last Friday’s 36-34 loss to a pretty good Mount Pleasant team. Cox Mill was short on a 45-yard field goal on the last play that would’ve won the game.
Cox Mill allowed 191 passing yards to Mount Pleasant, so the air-minded Mustangs could do some damage.
Central Cabarrus (2-0) at Carson (1-1)
Carson again opens SPC play with a tough matchup with the Vikings. Central Cabarrus rolled 45-24 against the Cougars last season in the first meeting between the schools.
Central Cabarrus graduated that collection of explosive offensive players it had in 2013, including SPC Player of the Year Kenny Purvis, but this is still a very solid team and the Vikings have more experience on defense than they had a year ago.
Carson will do what it does. The Cougars will try to pound it 5 yards at a time, control the ball and move the clock.
Salisbury (0-3) at Lake Norman (2-1)
Lake Norman QB Josh Ladowski is committed to North Carolina to play baseball, but he spends his fall Fridays as an All-State athlete, and he has an All-State receiver in Corey Joyner.
Lake Norman is a good 4A team that lost a tough one to a very talented Hough team last week.
Berry (1-1) at A.L. Brown (1-2)
Officially, the Wonders are hosting Phillip O. Berry Academy of Technology.
The Wonders have gotten a big offensive games from Sandon McCoy, Casey Walker and Jalyn Cagle, but they’re still trying to put it all together. This is the Wonders’ last non-league game before starting MECKA competition.
The Wonders beat Berry’s Cardinals 45-39 last season by scoring the last 16 points, but Berry, a Charlotte school which lost good players via transfer, isn’t supposed to be as stout this season.
This probably is a must-win for the Wonders if they’re going to continue that amazing streak of winning seasons that goes back to 1977.
Other games
Keep an eye on the Hickory Ridge-Concord SPC opener. Both are undefeated.