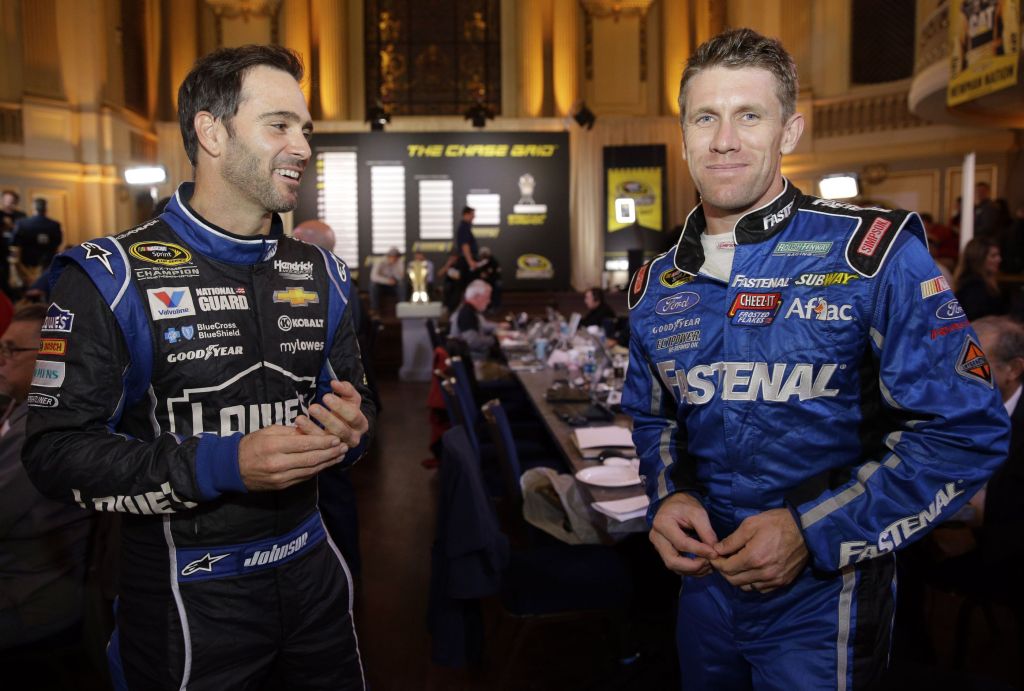 CHICAGO (AP) — It’s been 11 weeks since Jimmie Johnson’s last victory and he suffered through one of his typical summer swoons.
But as the defending NASCAR champion prepares for the start of the Chase for the Sprint Cup championship, he feels as confident as ever that he’ll once again be hoisting the prize at the end of the year. Johnson goes into the Chase opener Sunday at Chicagoland Speedway attempting to kick off a record-tying seventh title run. Only Hall of Famers Richard Petty and the late Dale Earnhardt have won seven.
“I feel good. We’ve come through some tracks that historically aren’t good for us with top-10s, top-five runs,” he said. “I feel like we’ve gotten rid of the bad luck; we’re running where we should. We’re getting to the finish line and coming into seven or eight of my best tracks. We’re definitely going in the right direction.
“I honestly feel better about our chances this year than I did last year on this same day.”
Johnson, who won three races this season and is tied for the second seed in the Chase, stumbled through July with consecutive 42nd-place finishes at Daytona and New Hampshire and was 39th at Pocono and 28th at Watkins Glen.
He’s since rebounded as he prepared for the Chase with four consecutive top-10 finishes, including his eighth-place run last week at Richmond, where he had to be treated for dehydration after the race because of a problem with his helmet cooling system.
So had Johnson been playing possum over the summer and lying in wait for the Chase to begin? He scoffed at the idea Thursday that he or crew chief Chad Knaus would deliberately sabotage a portion of the season.
“Chad would kill me if he thought I was playing possum,” Johnson said. “It hasn’t been fun. The truth of the matter is some of the tracks are just tough for us and frustration sets in and it just drags us down and affects us.”
Yet it seems to be the same story every year for Johnson, who is just average in the weeks leading into the Chase and then turns it up a notch when the championship is on the line. Matt Kenseth opened the Chase last year with back-to-back wins, but Johnson surged ahead of him for the title with nine top-10 finishes in the Chase.
When everything is on the line, Johnson and the No. 48 team seem to always kick it into a higher gear.
“It’s nothing conscious that we do,” he insisted. “But truthfully, we respond well to pressure and we make good decisions when pressure is put on us. We’re trying just as hard in the Chase as we do in the regular season.”
So he prepared Thursday to open the Chase, which for the first time features a 16-driver field and will have three rounds of eliminations. The entire field will be trying to grab one of the four slots for the season finale at Homestead, where it will be winner-take-all for the title.
His Hendrick Motorsports organization has all four of its drivers in the Chase, which Johnson acknowledged could bring an intensity to the race teams he’s never seen before. He’ll be seeking a record title, while Jeff Gordon wants a fifth championship and Dale Earnhardt Jr. and Kasey Kahne are each vying for his first Cup.
Johnson said the communication and data sharing at Hendrick is as “open and helpful and team-oriented” as it’s ever been. He pointed to how all the drivers went to Victory Lane at Atlanta two weeks ago to celebrate Kahne’s Chase-qualifying win. But as the Chase progresses, it could get tense.
“Championship battles are difficult among teammates,” he said. “I’ve been in that situation a bunch and we’ve always handled it well. But it is so much harder to race a teammate for a championship than someone else. It’s easy to race someone else and get angry and use it in a positive manner. But it’s hard to be angry with somebody you respect and sit down next to at a team debrief.
“It’s a great problem to have and we’ll just see how it all unfolds.”