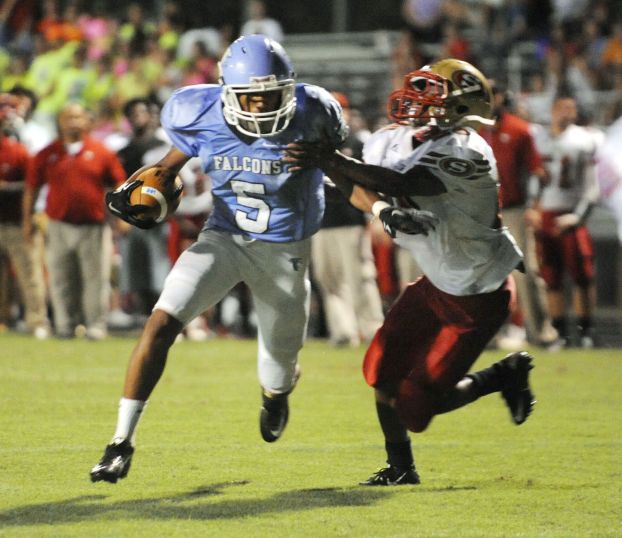 West Rowan’s Weeks threw a TD pass — and caught one

MOUNT ULLA — West Rowan’s gameplan called for an increased role for sophomore Kortez Weeks, and he justified the confidence of his coaches in Friday’s 44-7 win against Salisbury. Weeks, the Falcons’ jayvee quarterback in 2013, caught a touchdown pass — and threw one.
Weeks is a starting receiver, but he’s also the No. 2 QB on the depth chart. He isn’t far behind junior starter Kacey Otto.
“If you’ve got a B.J. Sherrill, there’s no competition, but we’ve got some competition at quarterback, and we look at that as a good thing,” West Rowan coach Scott Young said. “We’ve got competition at a lot of positions. That’s what you want. It’s not good for any kid to get complacent.”
Weeks — a 5-foot-11, 170-pound sophomore — is an athletic guy and proved it last winter with a serious contribution to the varsity basketball team as a freshman.
Weeks had a little extra incentive playing against Salisbury. His older brother, Keyows, had a career game against the Hornets as a senior last season, rushing for 158 yards and scoring two touchdowns.
“I was there watching when Keyows had that big game against Salisbury,” Kortez said. “He didn’t give me any special advice for playing against Salisbury. He just said to go hard and everything would be OK.”
Weeks had more butterflies than normal before Friday’s games because Young had informed him he was going to take the snaps at some point.
“We told him he was going to get a series in the first half and a series in the second half,” Young said. “He was going to go in at QB on our third series of the game, but then he banged up his elbow, so we waited until the fourth series.”
Weeks said that he had a “little stinger” in his elbow, but he entered at quarterback late in the second quarter with West Rowan leading 17-0 on a short scoring run by Otto, a punt return TD by Jovon Quarles and a field goal by Harrison Baucom.
“I just looked at is as an opportunity to show what I could do,” Weeks said. “I was excited.”
He made the combination of excitement and opportunity pay off. A 32-yard scoring pass to Juwan Houston pushed the Falcons’ lead to 23-0 with 2:22 left in the half.
“At first I didn’t think Juwan would be free, but I stayed in the pocket and then I saw him come open,” Weeks said. “Juwan made a play and came up with the TD.”
Otto came back in at quarterback and Weeks returned to receiver on the Falcons’ next possession. On the final play of the first half, Otto connected with Weeks for an 11-yard touchdown. That made it 30-0 and ended any realistic chance for a Salisbury rally.
“I ran a little hitch route and Kacey got the ball to me,” Weeks said. “You gain a lot of momentum when you score on the last play of the half.”
Weeks’ big brother gave him a pat on the back for doing his job and maintaining the family tradition of playing well against Salisbury.
“It was a game that gives me a lot of confidence,” Weeks said.
Young said the victory was a step forward for his 2-1 team, even with 10 penalties and two turnovers.
West Rowan finished with a modest 117 passing yards, but that was progress. The Falcons threw for just 69 passing yards in their first two games — 21 against Mooresville and 48 against Davie. Weeks was 2 for 3 against the Hornets, while Otto was 5 for 8.
“Both our quarterbacks had a turnover against Salisbury, but I thought they both had good games,” Young said. “Kortez is going to be a very good player. He just needs more reps and more games.”

Appalachian State has been on the extreme ends of the spectrum in the win and loss columns this season. The... read more