‘This was our Pearl Harbor’ 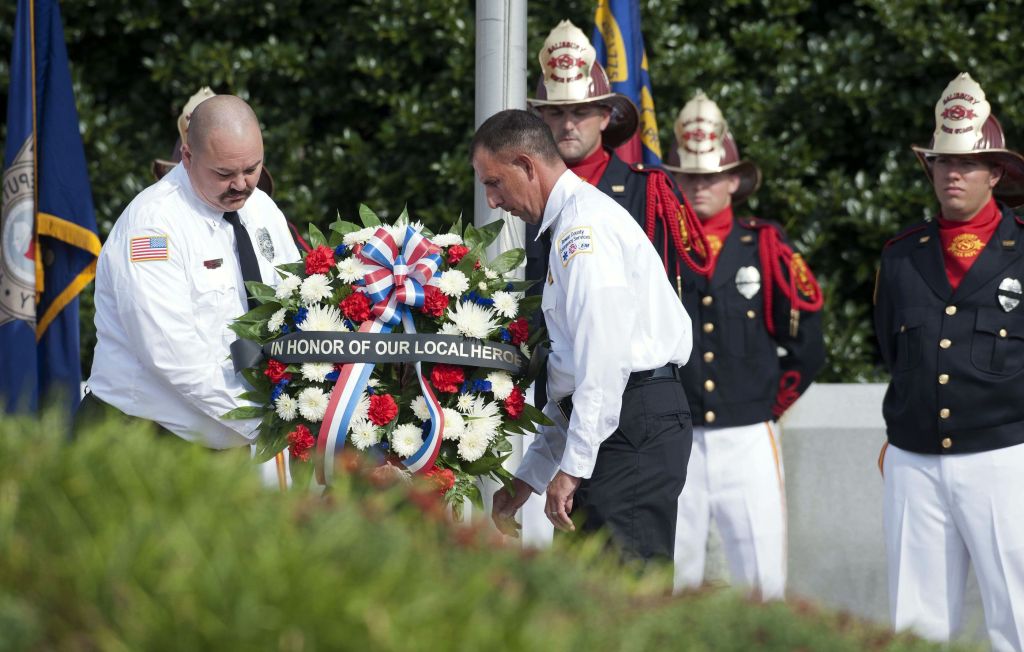 SALISBURY — It was a day of prayer.
A day of remembrance.
A day of appreciation.
A day for taking stock.
A beautiful, sunny day much like Sept. 11, 2001, when the world seemed to change as planes flew into the World Trade Center towers, crashed into the Pentagon and plummeted into a field in western Pennsylvania.
“This was our 1941,” Salisbury Mayor Paul Woodson said Thursday morning at the Salisbury Firefighters’ Memorial, located on the southern edge of the Chestnut Hill Cemetery. “This was our Pearl Harbor.”
The firefighting, law enforcement and emergency rescue communities came together Thursday for Salisbury’s annual memorial ceremony remembering those who died in the 9/11 attacks 13 years ago.
Woodson recalled he was in a meeting with the police chief when a plane went into one of the World Trade towers at 8:46 a.m. that day. As with many others, Woodson assumed it was a tragic accident — a small plane whose pilot became disoriented and flew way off course.
He returned to his dry-cleaning business, where soon his manager emerged from the office with a television and said a second plane had flown into the second tower.
It was then Woodson and the rest of America realized the country was under attack.
The country calls it Patriot Day now. Thursday’s ceremony included prayers, public and private; the playing of taps; a resolution of remembrance from Rowan County; the placement of a wreath “in honor of our own local heroes”; and the traditional 5-5-5 ringing of the fire bell which recognizes the passing of a firefighter and his final return to the station.
The Rev. Carroll Robinson, chaplain for Rowan County Emergency Services, read the names of local firemen who died in the past year. They included Richard D. Futrell of the South Salisbury Fire Department: Barry Herion of East Spencer Fire; and Darrell Cody, Dewey Forrest and Charles Truesdale of the Richfield-Misenheimer Department.
For the second time since the 9/11 ceremony has been held in Salisbury, Rowan County Sheriff Kevin Auten gave the main remarks.
“This day of remembrance has grown in importance in this country,” Auten said, noting it also is a day of appreciation for first responders who locally and throughout the country put their lives on the line daily in service to their communities.
Auten also paid tribute to men and women serving in the armed services and whose commitment to defending the country comes voluntarily.
Borrowing words from the Rev. Billy Graham, Auten said a tragedy meant to tear the country apart 13 years ago, united it instead.
The wounds from Sept. 11, 2001, still remain, the sheriff said, though they have scarred over.
“It’s never gone,” Auten said, “and you never forget.”
Jim Sides, chairman of the Rowan County Board of Commissioners, read the resolution declaring the day as Patriot Day in Rowan County.
Woodson recalled the many acts of bravery that occurred the day of the 9/11 terrorist attacks, especially the passengers of Flight 93 who purposely brought their jet down in Pennsylvania so it could not be flown into the White House or U.S. Capitol.
“There were some real heroes that day,” Woodson said.
An overriding message for the morning was love of country and the tolerance, service, generosity and resolve it tries to represent.
“Why would anybody, given a choice, choose tyranny over liberty?” Auten asked. “They would not.”
Contact Mark Wineka at 704-797-4263.