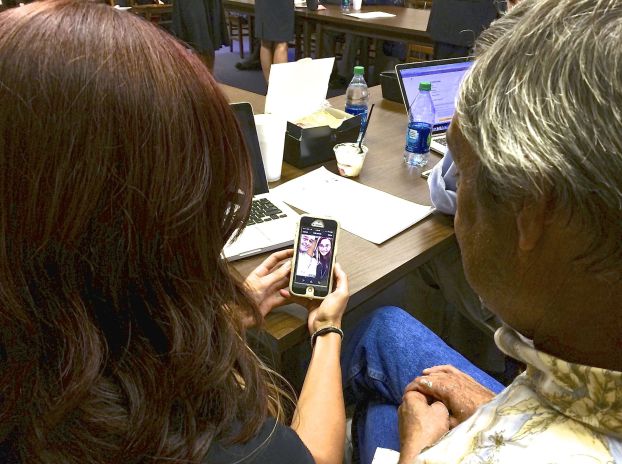 Six high school seniors met with Rowan-Salisbury Board of Education members during Monday’s work session to school them on one thing teenagers do best — social media.
Social media isn’t just for fun anymore. Educators are using it more and more as a communication, teaching and sharing tool.
“We chose to use students for the Board of Education Twitter session because they are digital natives. They use Twitter every day to communicate with peers around the world,” said Director of Digital Innovation Andrew Smith. “We felt that students have a unique perspective on how to use social media in the classroom.”
Tech-savvy leaders were chosen by their teachers and principals and out of student government. Ryan Turney and Malorie Ritchie represented Carson, Bayley Corriher represented East, Bryant Madison came from North, Kristen Bailey came from West and Taylor Kluttz came from South.
The students said a lot of clubs and organizations at their schools use Twitter to communicate, such as the National Honor Society or athletic fan clubs.
Madison said he has a teacher who uses Twitter in the classroom to list assignments and study guides, as well as provide summaries of classes.
“It makes it really easy because he summarizes it into 140 characters,” Madison said.
Ryan Turney said he hoped to see snow days and other announcements made on Twitter, adding that he feels it’s more reliable than ConnectED messages.
The students spent about 15 minutes working individually with school board members, who are at a wide level of technological ability.
They discussed how to use Twitter, why it’s important and who to follow. Some even took selfies and tweeted them out during the meeting.
“Social media and Twitter can also be very helpful to educators and administrators. Twitter allows educators and administrators to connect globally with their peers,” Smith said.
He added that Twitter can be a “personal learning community,” where educators can follow their peers to get new ideas.
This year, the Rowan-Salisbury School System will hold monthly Twitter chats throughout the year. The chat scheduled for next Tuesday will focus on using technology to enhance literacy instruction.
“We think that our educators should be able to learn anywhere anytime, and Twitter allows us to do this,” Smith said.
Board members were also given “Twitter for educators: A beginner’s guide” by Amber Coggin of the Mobile County Public School System in Alabama.
The online resource explains how to create a Twitter account, how to find people to follow and a guide to Twitter Lingo.
It also included a list of seven ways to “be worth following on Twitter.” While the tips are especially relevant to educators, they’re good for anyone to consider as they tweet.
• Be interesting — Don’t just tweet about what you had for lunch!
• Be informative — Share links and other resources.
• Be interactive — Spend some time on the site. Don’t just tweet and run.
• Be promotional — Don’t be afraid to share the good work you’ve done.
• Be considerate — There is such a thing as tweeting too much and flooding others’ timelines. Oh, and don’t type in ALL CAPS. It’s considered YELLING!
• Find a balance — Balance all of the above and you will be a good, respectable Tweeter that others will want to follow.