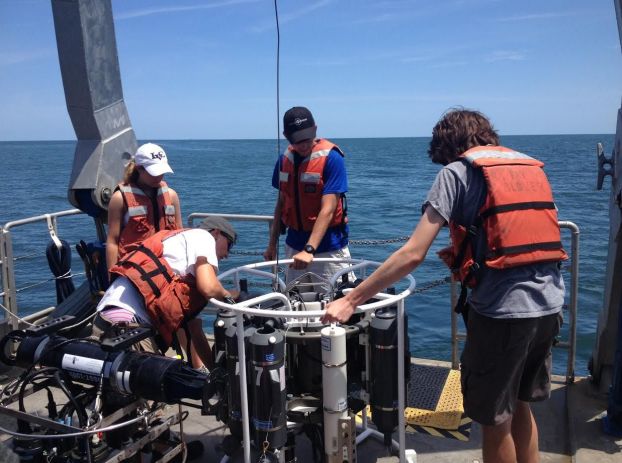 Ever wonder what makes algal blooms? Catawba College senior Logan Ellis of Julian likely has a good idea about the cause. That, after he spent the summer participating in a National Science Foundation funded Research Experience for Undergraduates (REU) at Old Dominion University, Department of Ocean, Earth, and Atmospheric Science in Norfolk, Va.
Ellis, who says the experience broadened his career horizons, applied for and was accepted into this very competitive REU where he studied the nutrients in rainwater and how they can cause algal blooms. He was also trained in analytical water chemistry techniques and conducted field work on an offshore research vessel.
A biology major, Ellis said his experience allowed him “to create a network of friends and mentors from all over the country.”
“Working with graduate students all summer, I feel like I learned what is expected while pursuing my goals of higher education. By working in a lab, I was able to expand upon the numerous tests I am able to conduct confidently and hopefully carry with me to a job in the future,” he explained. “Weekly seminars and occasional field trips helped to illustrate my research’s larger goal.”
Ellis said he was motivated to pursue an REU after hearing about the experiences of other Catawba students who had applied and were accepted to participate in REUs at other institutions. “My professors also recommended these in class,” he added.
Instead of helping to finalize his decision about his future plans, Ellis’ REU allowed him to see even more possibilities available to him.
“In the future, I would like to work in the medical field, but which area is not yet decided. I would like to take some time off after undergrad and work in other fields to help me decide what I want to do.”
Logan, who will graduate in May of 2015, has been a student-athlete, playing on Catawba’s golf team, during his time at Catawba. On campus, he is also a member of the Dead Athenian Society and the Order of the Blue and White. He came to Catawba from Southeast Guilford High School.
Dr. Jay Bolin, assistant professor of biology at Catawba, noted the competitive nature of the program and the caliber of the Catawba students selected to participate.
“We are proud of our Catawba students who participate in National Science Foundation REU programs. The application process is extremely competitive and having five students participate in the last two summers (four in summer 2013 and one in summer 2014) speaks to the competitiveness of our science students,” Bolin said.
“The REU experience provides our students valuable exposure to the rigorous, but invigorating life of a science graduate student.”