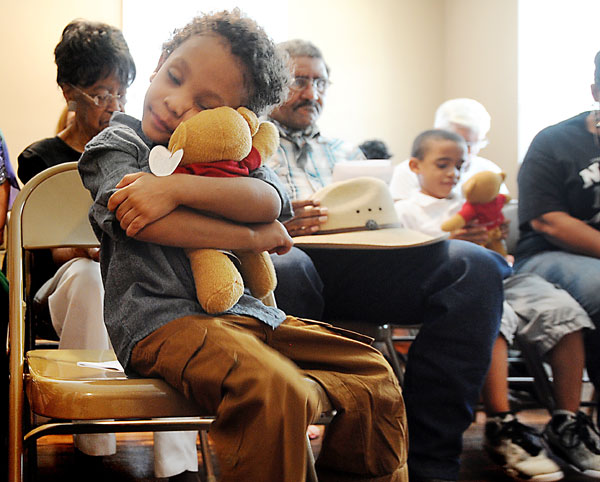 As an 8-year-old, Rachal helped on the construction site of the second Habitat house in Natchez, on Obrien Street. After completion that house became his home.

At 1016 Martin Luther King Jr. St., Sunday, Philip received the keys to the 18th Habitat house that his wife and four children — Christopher, Naomi, Philip Jr. and Victor — moved into the same day.

Having grown up in a Habitat house, the Natchez native knew what the move would mean for his children.

“Back when we moved into our house, I didn’t know a lot about Habitat or what was happening except that we were getting a new house and I was getting my own room, but this time it’s different,” Rachal said. “I’m just grateful for the Lord for this opportunity for me and my family.”

Habitat for Humanity is a Christian ministry dedicated to eliminating poverty housing.

The Natchez chapter started in 1991 and calls on individual and student volunteers, as well as volunteers from churches and civic organizations, to help build each house.

House recipients are required to devote their own work hours to construction building up “sweat equity.”

The house is sold to the family at the exact building cost, and Habitat finances the mortgage for the family at 0-percent interest for 25 years with no closing costs.

The family ends up paying nearly $300 a month for the note.

Rachal’s mother, Penny, said she was thrilled to see her grandchildren get the same security her son did 20 years ago.

“That house brought us some much needed stability in our lives, and I’m so grateful to the Lord for blessing my son and his family with that same opportunity and blessing,” said Penny, who still lives in her Habitat house. “This brings back so many good memories.”

The Rachal family gathered in the living room of their new home Sunday afternoon for a blessing ceremony and a presentation of the keys.

During the ceremony, Rachal’s wife, Jordan, fought back tears to thank various community members and Habitat volunteers for attending and helping build the house.

“Thank you for helping us get our dream home,” Jordan said. “We’re so thankful for everyone and the great job they’ve done.”

Natchez-Adams County Habitat for Humanity President Andrew Calvit reminded the Rachal family of what receiving the house meant for them.

“You are homeowners now, and homeownership comes with a lot of responsibility and stewardship,” Calvit said. “Take care of this house.”

After Calvit handed over the keys to Philip and Jordan, he thanked the numerous volunteers, groups and organizations that helped in the building process.

“It’s not Habitat building the house, it’s the community,” Calvit said. “And that’s what this is all about.”

As Jordan walked around the Martin Luther King Jr. Street house after the ceremony, she ran through a checklist of everything she wanted to move into the house that day.

“We’ve had to move around a lot this year to live with my mother-in-law, my mother and my grandmother, so we’re trying to get in here as soon as possible,” Jordan said, smiling. “We’re ready to make this our home.”

Jordan had already mapped out the layout of each room deciding which child would go where.

And even though Christopher, 7, admitted he had hoped for his own room, the oldest of the Rachals’ children said he didn’t mind too much sharing a room with his younger brothers.

“I’m excited,” Christopher said. “This is our house now.”