Falcons can be special 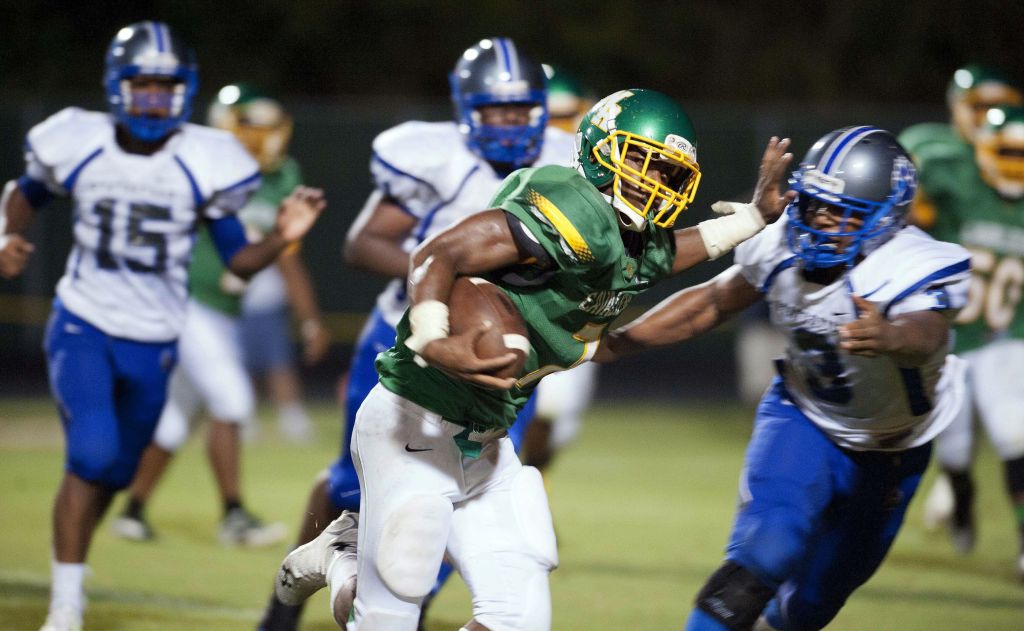 Prep football notebook …
MOUNT ULLA — No one does special teams better than West Rowan.
When Jovon Quarles took a punt return 51 yards to score in Friday’s 44-7 win against Salisbury, it marked the 15th time West Rowan’s punt return unit has scored in the last five seasons. Only one of those 15 was on a punt block. On the other 14, the Falcons were able to set up their patented wall and escort someone to the house.
While Quarles got the six points, equally heroic in West Rowan’s latest rewarding return was Amos Duncan.
“Amos tried to block that punt, and he’s down on the ground,” West Rowan coach Scott Young said. “Then he gets up and runs to be the last guy on our wall. Then he lays the crushing block that produces the touchdown.”
Quarles is a backup tailback behind Harrison Baucom, but he’s only a sophomore. You should hear his name in the future.
In all, West Rowan (2-1) has scored 22 times on special teams in the last five seasons. The Falcons have scored twice on conventional kickoff returns, once on the return of an onside kick, and twice by returning free kicks following safeties. The Falcons also scored once on a faked punt and they had a blocked punt for a TD last season against Northwest Cabarrus.
•

THREE IN A ROW: Senior tailback Harrison Baucom topped 100 rushing yards on the last of his 20 carries against Salisbury on Friday and has topped 100 three straight games. Coaches charted his stats closely and took him out after he topped 100 with the game well in hand.
The Hornets limited Baucom to 106 yards, so he dropped behind Carson’s Brandon Sloop for the county lead in rushing yards per game.
Baucom has 461 rushing yards and leads the county by a lot with 53 points. He’s scored six TDs and has added a field goal and 14 PATs.
Baucom played American Legion baseball most of the summer, but he credits Young for granting him a week break between the end of his long baseball season and reporting for football workouts.
“I had a chance to rest up some and go on a vacation,” Baucom said. “I just missed one 7-on-7.”
Baucom was hobbled this week with a toe infection, but the Falcons are open Friday. He should be fine when they return to action.
After watching the film of Salisbury’s 14th straight loss to West Rowan, Salisbury coach Ryan Crowder had praise for running back Antwond Glenn and defensive stalwarts J.C. Burton and Dante Gaston.
DBs Erik Murray and Shaquez Strickland came up with turnovers for the Hornets against West Rowan.
Willie Clark has been steady three straight games, cranking out 239 yards on 33 carries.
•

ROUGH ROAD: Salisbury is 0-3, and the difficulty of Salisbury’s schedule has been well-documented.
4A Lake Norman, 3A South Iredell and 4A Southeast Guilford are on deck. The Hornets were outscored 148-30 by those three teams last season.
Lake Norman QB Josh Ladowski is a tremendous player, and the Hornets will get to chase him around again on Friday. Ladowski has 430 passing yards and 334 rushing yards.
North Rowan dropped to seventh in the AP 2A poll after a 21-14 loss to Statesville, which is ranked No. 9 in the AP’s 3A poll.
Statesville is good and deserves a lot of credit for winning in Spencer, but many of the Cavaliers’ wounds were self-inflicted. There was an interception, a lost fumble, a muffed punt and a parade of costly penalties, and it didn’t help when the Cavaliers lost receiver Shareef Walker early in the game. That meant the Greyhounds could pay more attention to containing Sakil Harrison.
The bright spot was North Rowan’s defense, which shut out the Greyhounds in the second half. Jake Pritchard had two sacks, while Zion Debose and Terry Cathcart had emphatic tackles in the Statesville backfield.
“I thought we played well enough defensively,” North Rowan coach Joe Nixon said. “Statesville’s good on offense and when you hold them to 21, you should win the ballgame.”
•

STREAK: North Rowan had won 16 straight regular-season contests before losing to the Greyhounds — their first two this season, all 11 last season, and their last three in 2012. Before Friday, the last loss North Rowan suffered in a regular-season game was a struggle with Albemarle in Spencer in 2012 that decided the 1A Yadkin Valley Conference title.
•

HOME, SWEET HOME? It’s hard to believe, but North Rowan’s most recent five losses have all come at home — Statesville, Shelby in the 2013 playoffs, West Montgomery in the 2012 playoffs, and Albemarle and West Rowan in the 2012 regular season.
North Rowan hasn’t lost on the road since it fell to Salisbury 19-7 in August 2012. North Rowan is on the road at Davie on Friday.
•

PREGAME: North Rowan (2-1) recognized Jareke Chambers, the Cavaliers’ all-time rushing leader, in a ceremony prior to the Statesville game. Mark Sturgis, who had held the school record since 1976, was on hand and symbolically handed off a football to Sturgis.
Nixon asked Sturgis to speak to the team prior to the Carson game last season, and Sturgis has closely followed Chambers’ progress toward the record.
Sturgis, who performed double duty as an all-conference linebacker, rushed for 3,259 yards in 26 games as a North Rowan back.
Chambers now has 3,411 yards in 31 varsity games, including two brief appearances as a freshman.
Sturgis carried the ball 438 times. Chambers has carried 417 times.
Chambers now owns a host of North Rowan records. Besides career rushing yards, he’s North Rowan’s leader for rushing yards in a regular season (1,700), rushing yards in a season including playoffs (2,018) and rushing yards in a game (272).
Chambers also is the only Cavalier to score six TDs in a single game.
East Rowan (1-1) was off last Friday.
Coach Kenneth McClamrock had praise for linebacker Jake Boltz, DB Willie McCree, and the Wyrick brothers, Samuel and Seth.
Both Wyricks are now 11th in county history in a significant stat and both are progressing toward school records that have been in the books since 1970.
Samuel is 11th in career passing yards with 3,623. C.M. Yates had 3,910 passing yards. He holds the East Rowan record and ranks seventh all-time in the county.
Seth has 95 receptions in his career and is on his way to becoming only the second Mustang with 100 receptions. Johnny Yarbrough holds the school record with 136 catches.
East Rowan is home against Cox Mill Friday.
Carson (1-1) was off last Friday, but coach Joe Pinyan had praise for his specialists — kicker Cole Howard and punter Heath Mitchem.
Pinyan also is happy with multi-dimensional senior Darren Isom.
“He’s pulling double duty and has been very unselfish about it,” Pinyan said.
Isom has rushed for 132 yards and three TDs and has a 54-yard TD reception. He also has an interception on defense, where he’s used in the secondary.
DB Jonathan Rucker was hurt in the North Rowan game but could return to action Friday.
Carson has a big SPC game at home Friday against Central Cabarrus.
South Rowan (1-1) was off last Friday.
Coach Jason Rollins feels pretty good about a much-improved defense and singled out linebacker Brian Cagler for praise. Cagler is a 220-pound senior.
South Rowan ranks second in the county to North Rowan in rushing defense and second in the county to East Rowan in pass defense.
South Rowan plays at SPC opponent Northwest Cabarrus on Friday.
The medical reports on running back Cade Carney’s knee have been positive and he’s expected to play Friday when the War Eagles (2-1) host North Rowan.
That’s important because Carney churned for 190 yards on 28 carries against North Rowan last season.
While Carney has been slowed by injury, Davie QB Parker Correll is off to a phenomenal start with 774 passing yards and seven passing TDs. He also rushed for three TDs against Lexington last week.
Ben Ellis has five TD receptions.
After losing at Weddington 31-21, the Wonders are 1-2 for the first time since 2003 when they opened with an overtime loss to South Rowan and a one-point loss to Eastern Randolph in Week 3.
The Wonders got back on track in that 2003 season with a 13-12 overtime victory against Concord and managed to finish 10-4.
This season’s Wonders will try to right the ship against visiting Charlotte Berry Academy on Friday.
Jayln Cagle starred for the Wonders at Weddington. He scored all three TDs, two on rushes and one on a pass from Damon Johnson.