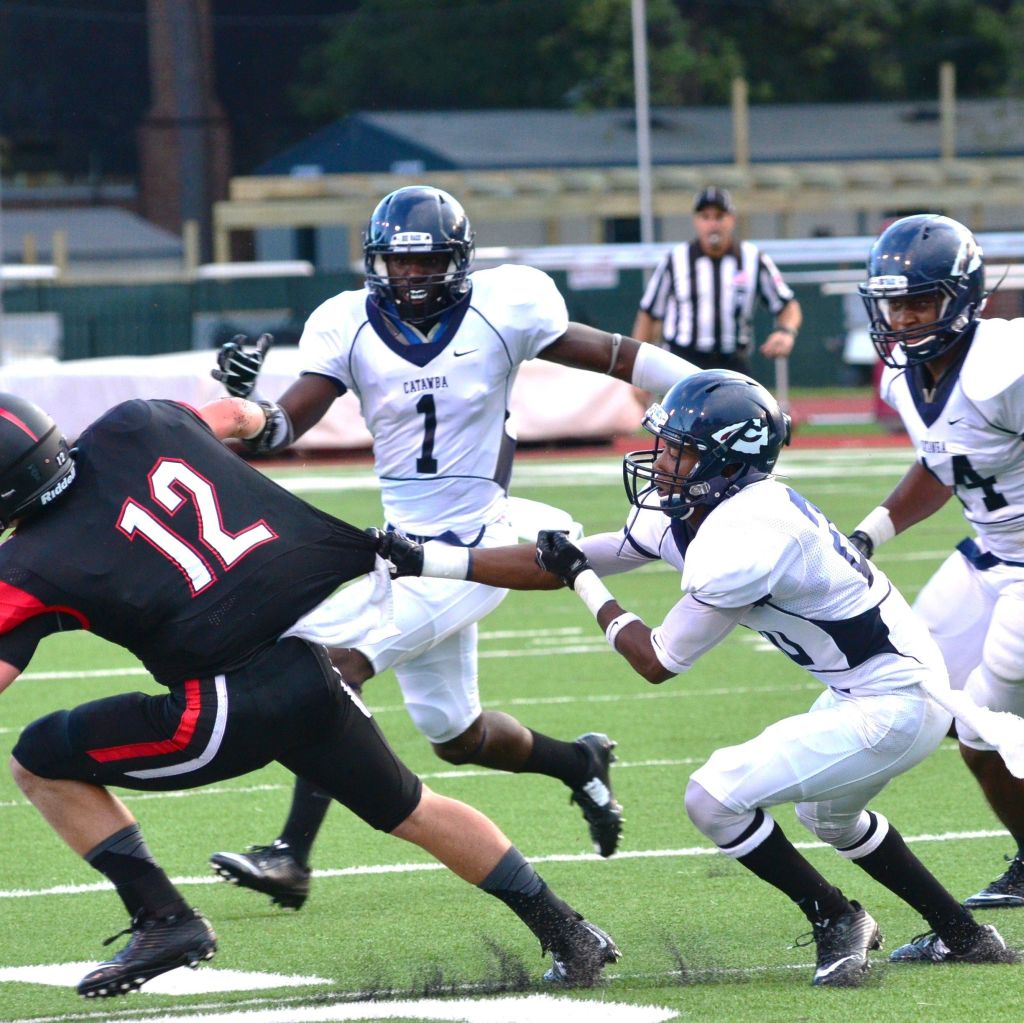 SALISBURY — Free safety Philip George will be the least-nervous Catawba Indian this week as the team prepares its trip to Cullowhee for Saturday’s 3:30 p.m. game at Western Carolina.
George already has been there. He already has played on the turf at Bob Waters Field in Whitmire Stadium. He was wearing the teal, bronze and black of the Coastal Carolina Chanticleers on his last trip to Cullowhee — Nov. 19, 2011 — and he made an impact on that game with seven tackles.
George helped Coastal Carolina roll 45-21 over the Catamounts to close the 2011 season.
But change was coming. Three weeks after that victory, David Bennett, who had been at the helm 10 years, was no longer the coach of the Chanticleers, and Bennett’s longtime defensive coordinator and linebackers coach Curtis Walker also was looking for a new employer.
“No one knew at the time that the game at Western Carolina was going to be our last one,” Walker said.
While he was on the staff at Coastal Carolina, Walker recruited George, who was a star at Keenan High in Columbia, South Carolina. George was an outstanding tailback, but it was as at safety that he really stood out in the 2008 and 2009 seasons. He had 4.5 speed and good size and strength for a DB.
“I had 13 or 14 scholarship offers,” George said. “The first offer I ever got was my junior year. It was from Western Carolina.”
Offers from Buffalo, Hampton, North Carolina A&T and North Carolina Central quickly followed.
“I remember recruiting him for Coastal,” Walker said. “Great young man. Great speed. Great intelligence. A three-sport star in high school in football, basketball and track. You like to get those young men.”
South Carolina, Clemson, Virginia Tech, Maryland. Georgia Southern and Western Michigan were making calls to George or stopping by the school, but Walker was able to land George, who played in South Carolina’s North-South All-Star Game. Walker’s straight-forward, education-church-and-football approach made an impression.
“I really liked coach Walker, and there was a good family feeling at Coastal,” George said.
George justified the hype while playing special teams as a true freshman at Coastal Carolina.
He started nine games as a sophomore in 2011 and was the only Chanticleer to register every defensive stat. He checked all the boxes — tackle for loss, sack, interception, pass breakup, quarterback hurry, forced fumble and fumble recovery.
He checked off three of those — forced fumble, sack and interception — in one afternoon against Charleston Southern. That effort earned him the Big South Defensive Player of the Week award.
In all, George played three seasons for Coastal Carolina and made 69 tackles.
Walker was hired as Western Carolina’s defensive coordinator shortly after leaving Coastal Carolina. He prepared practice schedules, recruited North Carolina and Virginia and created defensive gameplans. He was only in Cullowhee 11 months. In December 2012, the former Catawba linebacker was hired as the Indians’ head coach.
George had one season of eligibility left. He wanted to spend it playing for Walker. He transferred to Catawba and redshirted the 2013 season. Now he’s the starting free safety.
“Coach Walker always made me feel like part of his family — and you follow family,” George said.
George is listed at 6 feet, 190 pounds, but looks bigger. He is seasoned and experienced and will turn 23 next month. Young Catawba DBs, several of them still teenagers, look to him for leadership and he’s happy to provide it either vocally or by example.
George debuted with seven tackles in Saturday’s 35-7 win at Davidson that was easier than the score sounds.
“It was our first full action, our first chance to see ourselves against an opponent other than our own teammates,” George said. “We could measure where we are a little bit. It was something to build on.”
When Catawba plays Western Carolina on Saturday it will be the first time the Indians have taken on an FCS program since a 20-3 loss at Coastal Carolina in 2011. George recovered a fumble for the Chanticleers in that game. Now he’s on the Indians’ side, and they’ll be glad to have him on Saturday.
Follow Mike London on Twitter at @mikelondonpost3.