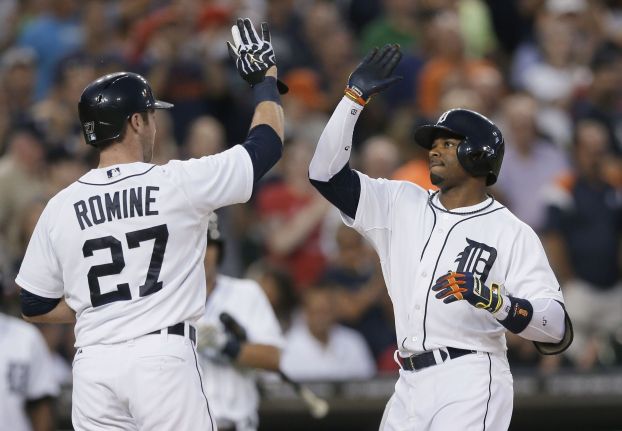 Baseball Roundup…
DETROIT (AP) — Max Scherzer escaped a bases-loaded jam in the fifth, Rajai Davis and J.D. Martinez homered, and the Detroit Tigers beat Kansas City 4-2 on Tuesday night to pull within percentage points of the Royals atop the AL Central.
Scherzer (16-5) allowed a run and seven hits in 6 2-3 innings. Kansas City was down 3-1 in the fifth when Alex Gordon’s deep fly to right went just foul with two on. Gordon walked to load the bases with one out, but Salvador Perez lined out and Eric Hosmer struck out.
Joe Nathan earned his 30th save in 36 chances, allowing two infield singles to start the ninth before ending it with two strikeouts sandwiched around a picked-off runner.
Kansas City’s Jason Vargas (11-8) allowed four runs and six hits in 5 1-3 innings. He struck out six and walked three.
Detroit will try to sweep the three-game series Wednesday night.
Twins 4, Indians 3
CLEVELAND (AP) — Oswaldo Arcia’s two-run homer capped Minnesota’s four-run fourth inning against Trevor Bauer, and the Twins dented Cleveland’s playoff hopes.
The last-place Twins won for just the fourth time in 16 games.
Minnesota’s bullpen combined for four scoreless innings, with Jared Burton working the ninth for his second save.
Blue Jays 9, Cubs 2
TORONTO (AP) — Jose Bautista hit a go-ahead, three-run double in the seventh inning, and Toronto rallied for the win.
Mark Buehrle (12-9) allowed two runs and 10 hits in seven innings to stop a six-start winless streak, helping the Blue Jays improve to 6-2 in September.
Rays 4, Yankees 3
NEW YORK (AP) — Left fielder Matt Joyce threw out Stephen Drew in the fifth inning when catcher Ryan Hanigan blocked the sliding runner, and Tampa Bay held on to beat the fading Yankees.
Chris Archer (9-8) allowed three runs and seven hits in 6 1-3 innings. Jake McGee got three outs for his 17th save in 19 chances.
Angels 9, Rangers 3
ARLINGTON, Texas (AP) — Kole Calhoun hit a leadoff homer, Collin Cowgill had a big eighth inning and Los Angeles stretched its winning streak to six by beating Texas.
Cowgill reached on an infield single to start a seven-run eighth. He scored on Mike Trout’s triple and capped the outburst with a bases-loaded triple.
The Angels, with the best record in the majors at 89-55, matched their longest winning streak of the season. The AL West leaders have won 12 of 14 overall.
Hector Santiago (5-7) allowed only a solo homer in five innings.
Calhoun’s third leadoff homer this season, and 15th long ball overall, came off Colby Lewis (9-13), who pitched into the eighth.
Orioles 4, Red Sox 1
BOSTON (AP) — Alejandro De Aza hit two homers, Adam Jones added another and Baltimore beat Boston to win for the 10th time in 13 games.
Chris Tillman (12-5) gave up one run in five innings, the 18th straight start in which he allowed three earned runs or fewer. Zach Britton pitched the ninth for his 34th save in 38 opportunities.
The first-place Orioles maintained their 10-game lead in the AL East over Toronto.
Phillies 4, Pirates 3
PHILADELPHIA (AP) — Maikel Franco hit a tiebreaking single in the seventh inning to lift Philadelphia over Pittsburgh.
Freddy Galvis homered, doubled and scored the go-ahead run after an infield single and a stolen base. Justin De Fratus (3-1) pitched a scoreless inning for the win. Jonathan Papelbon finished for his 36th save in 39 chances.
The Pirates entered the night with a 1 1/2-game lead over Atlanta and Milwaukee for the second NL wild card. The last-place Phillies have won 10 of 15.
Galvis led off the seventh with a grounder to deep shortstop for a single off Justin Wilson (3-4). After a pair of strikeouts, Galvis stole second. He scored on Franco’s hit to right.
Galvis hit a drive way out to right to tie it at 3 in the fifth.
Reds 9, Cardinals 5
CINCINNATI (AP) — Devin Mesoraco homered and drove in three runs, and Mike Leake pitched into the seventh inning and doubled home a run, as Cincinnati snapped a six-game losing streak against St. Louis.
The NL Central-leading Cardinals lost for only the second time in 11 games and maintained their 41/2-game lead over Pittsburgh.
The Reds won for the third time in 11 games. They are 17-33 since the All-Star break, a slide that has dropped them out of contention.
Leake (11-11) was coming off his worst start of the season. Against the Cardinals, Leake allowed three runs and eight hits.
He also doubled home a run in the fourth off Michael Wacha (5-6) for a 3-1 lead. His fifth double of the season was his 68th career hit, the most by any pitcher in the majors since his debut in 2010.
Aroldis Chapman relieved with two on and two outs in the ninth and fanned Mark Ellis on a 101 mph fastball to end it, getting his 31st save in 33 chances.
Mets 2, Rockies 0
NEW YORK (AP) — Jacob deGrom burnished his rookie of the year credentials by pitching three-hit ball for eight dominant innings, and the New York Mets held on to beat Colorado for their sixth win in seven games.
Jeurys Familia, the Mets’ third pitcher in the ninth inning, got Wilin Rosario to ground out with the bases loaded for his fifth save.
The win came after the Mets learned captain David Wright would be shut down for the rest of the season because of inflammation in his left shoulder.
Juan Lagares had an RBI single to help the Mets move to five games of .500 (70-75). Curtis Granderson added an RBI double off Christian Bergman (2-3).
In his 20th career start, deGrom (8-6) didn’t allow a baserunner after Nolan Arenado’s one-out double in the fourth — retiring his final 14 batters. He struck out nine and walked none.
Over his last 10 starts, deGrom is 7-1 with a 1.60 ERA.

DETROIT (AP) — Matthew Stafford was at his best when improvising — and that alone may be a sign of... read more