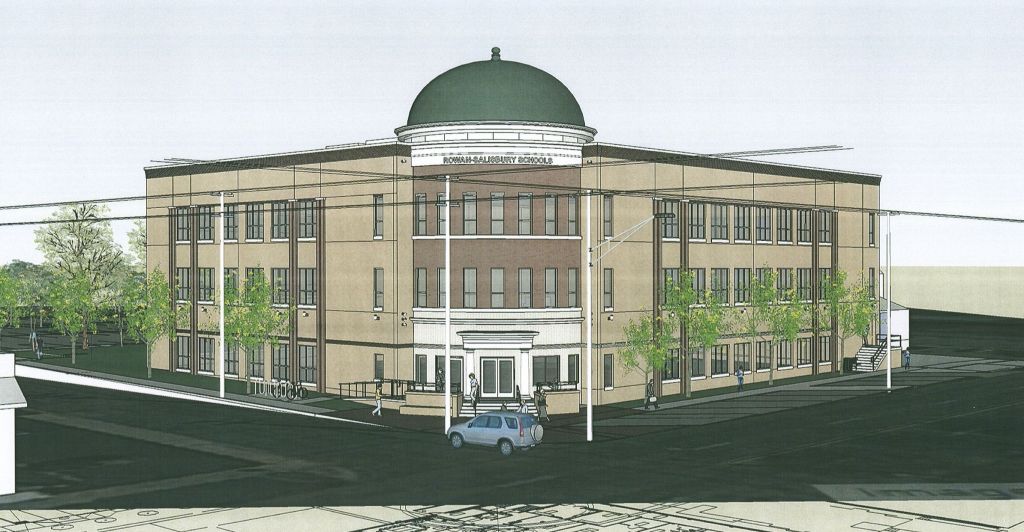 SALISBURY — Plans for a new administration office for Rowan-Salisbury Schools keep chugging along.
The Salisbury Planning Board approved Tuesday a site plan and conditional district overlay for the property.
The 47,268-square-foot building proposed for the corner of North Main and West Cemetery streets would be three stories high with a dome on top.
If the artist’s rendering looks familiar, it should, It’s pretty much the identical central office once planned for the 300 block of South Main Street.
This new two-acre site will be combining seven parcels. Two structures — one at 504 N. Main St.; the other, 130 W. Cemetery St. — will be torn down.
Parking will be provided on the side along West Cemetery Street and in the rear next to North Church Street. Plans call for 136 parking spaces on the site, not counting 19 additional spaces that could be arranged in cooperation with Richard’s Barbecue and Shulenburger Surveying.
Sidewalks will be constructed on three sides. The building’s other side will sit close to the existing Shulenburger Surveying office.
The building generally will incorporate a light tan brick, accented by dark tan and white bricks.
The dome will be metal and 36 feet in diameter.
The building received approval from the Salisbury Historic Preservation Commission in August. Next up will be Salisbury City Council, which already approved the closing of an alley off West Cemetery Street in connection to the project.
The actual request before Salisbury Planning Board Tuesday was a rezoning of the 2-acre site.
The existing base zoning on the tract is corridor mixed-use and downtown mixed-use, and those districts will stay in place.
But the rezoning would establish a conditional district overlay. The overlay would prohibit all other uses on the site except “government services.” It also requires the master plan for the property.
Architect Bill Burgin represented Rowan-Salisbury Schools at the Planning Board’s courtesy hearing Tuesday. Burgin is a Planning Board member who first had to be excused from the board before it took up the school system’s request.
Burgin said the project should bring approximately 150 people to the downtown.
The Planning Board approved the site plan and conditional district overlay by an 8-0 vote.