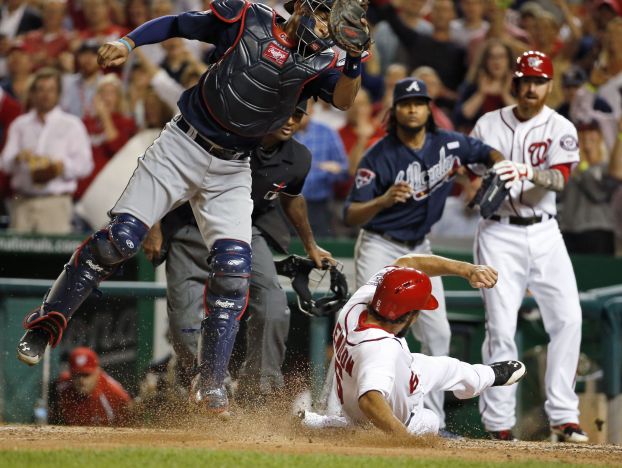 Nationals continue to pull away in NL East

WASHINGTON (AP) — Adam LaRoche kept up his torrid stretch with two hits and two RBIs, and the Washington Nationals essentially put to rest any thought that there is still a serious race for the NL East title with a 6-4 win over the Atlanta Braves on Tuesday night.
Washington’s second victory in two nights over the Braves, gave the Nationals a nine-game lead over their second-place rivals with 19 to play. Atlanta was a regular nemesis for about a year and a half, but the Nationals have put the kibosh on that trend by winning five of the last seven meetings.
Jordan Zimmermann (11-5) allowed four runs (two earned) with seven strikeouts and no walks in six innings. He hasn’t lost a decision since July 11 and is 5-0 — and the Nationals are 8-0 — in his last eight starts.
LaRoche singled in a run off Ervin Santana (14-8) in the Nationals’ four-run first inning and added another RBI single in the second.
Both were hitting works of art: He held back just enough to get the end of the bat on a changeup and poke a soft line drive up the middle, and lifted a low two-strike changeup into a line-drive hit to right.
LaRoche is 9-for-19 with four home runs and 12 RBIs in his last six games, a run that started when he overcame back and elbow injuries and a stomach virus to punch in five RBIs as a late sub against the Los Angeles Dodgers.
Santana settled down somewhat after his long first inning and stuck around through five. He gave up five runs, eight hits and four walks to fall to 7-2 since the All-Star break for the Braves, who remain in a crowded race for an NL wild card berth.
Washington led 5-0 after two, but errors by two shortstops — Ian Desmond in the fourth inning, Danny Espinosa in the sixth — and Justin Upton’s two-run homer helped the Braves get close.
The Nationals stopped the momentum by using four relievers to shut down the Braves over the final three innings, with Drew Storen pitching the ninth for the save. Washington manager Matt Williams initially indicated he would go to a closer-by-committee when struggling reliever Rafael Soriano lost the job on Friday, but Storen has finished off three wins in three days.
Trainer’s room
Braves: C Evan Gattis (strep throat) remained at the team’s hotel. Atlanta manager Fredi Gonzalez said Gattis could return Friday.
for the opener of a three-game series in Texas. … 2B Tommy La Stella was scratched from the starting lineup with a migraine, but he appeared as a pinch-hitter in the seventh inning.
Nationals: 3B Ryan Zimmerman, hoping to return before the end of the regular season, took on-field batting practice for the first time since injuring his right hamstring on July 22.
UP NEXT
Atlanta’s Aaron Harang (10-10, 3.87 ERA) faces Washington’s Stephen Strasburg (11-10, 3.43) on Wednesday as the Nationals go for the sweep in the three-game series.
———
Follow Joseph White on Twitter: http://twitter.com/JGWhiteAP

DETROIT (AP) — Matthew Stafford was at his best when improvising — and that alone may be a sign of... read more