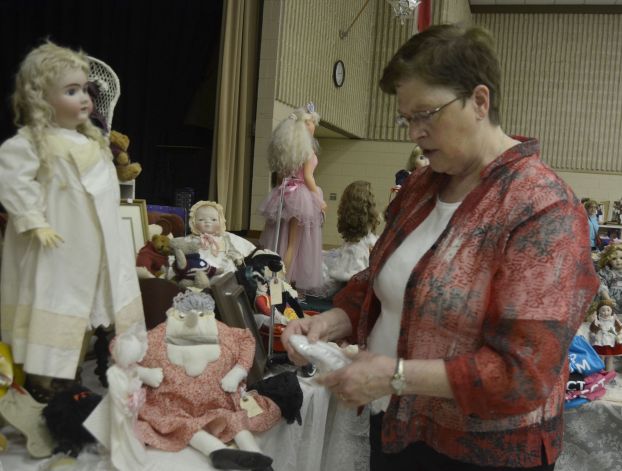 Kathy Gregg’s love of dolls did not begin as a child, although she did play with dolls. Her love began when she was doing graduate work for a thesis on vintage toys at the Bennington Museum in Vermont. She’d been studying dolls for a year. Gregg was at the museum by herself when a man walked in and told her he had two dolls for sale.

“I went across the street to the ATM,” she said.

She’s been interested in dolls since that time and has been adding to her collection for 40 years. She estimates she has about 200 dolls.

Gregg is administrator of the Spencer Doll and Toy Museum, which boasts 1,000 dolls collectively amongst its members. Gregg had a number of dolls on display at the Knights Southeastern Doll Show exhibit held Saturday morning at the Salisbury Civic Center.

She’s interested in the history and clothing of dolls because “you are seeing something of the past,” she said.

Gregg said some dolls fetch thousands, but the Salisbury show was for the average collector.

Thomas is president of the Rowan Doll Society.

Thomas said, of the dolls she owns, her favorite are the bisque or porcelain doll, which gets its name from the way they started off with flour and water like a biscuit.

“A lot of my dolls are my favorite because of the people who gave them to me,” she said.

Thomas looks at a doll’s clothing to determine if its high quality. She said doll makers used fine linens and material to make clothing.

Karen Nichols has fond memories of the first doll she ever received. The Lexington resident recalled her father telling her about her first doll that he gave to her when she was six months old. When the family moved from one part of New York to another, a 6-year-old Nichols carried her doll under her arm and her tiny purse under the other.

Nichols laughed about the time she learned her baby doll that she’d put in little girl’s clothing was actually a boy.

She and her husband were at the doll show where Karen bought a doll to add to her collection.

She’s been adding to her collection and buying dolls from shows and other places in the southeast for the past 10 years, Nichols said.

Zena Miller of Charlotte has been collecting since the early 1980s when she realized she could put a doll on layaway. The doll was $300, she said.

“I said they were beautiful, but I couldn’t afford them,” Miller said.

Miller collects because it relaxes her to dress and prep them and it takes her back to her childhood, she said.

She has more than 200 dolls in her collection.

Deborah Armstrong of Columbia, S.C. creates clothing for her favorite dolls by artists and designer Robert Tonner. She purchases the dolls online and designs and sews the elegant clothing, some of which are replicas of wedding dresses.

She’s been collecting for seven years. Armstrong began dressing the dolls after she bought one and decided the doll needed something beautiful to wear.

After buying the doll, Armstrong just “knows what they should wear,” she said.

Armstrong taught herself to sew when she was about 11 or 12 years old.

She used to sit under a shade tree and make clothes for her Barbie.

Armstrong has often bought specialty material or lace from Ebay, but she mostly gets material from any fabric store.

Caroline Nance, 11, inherited her doll collection from her late aunt and on Saturday added a 1969 Chrissy Doll. The doll was popular because of the ability to grow hair at the turn of a dial on the back of the doll.

Her mother, Beth Nance, is director of the Spencer Doll and Toy Museum.

She does have some dolls on display but doesn’t plan to display her newest addition. She immediately began playing with the doll while manning the dessert table at the event with her grandmother.

She has a number of American Girl dolls and Barbie dolls. She hopes to one day add the Barbie African Queen Goddess doll to her collection.

Howard Knight, promoter of the show, said he’ll return next year to Salisbury. The exhibit left Salisbury for a couple of years, but now its here to stay, he said.

The heat was on for the third and final Market Chef competition for 2014, even though it was the dessert... read more