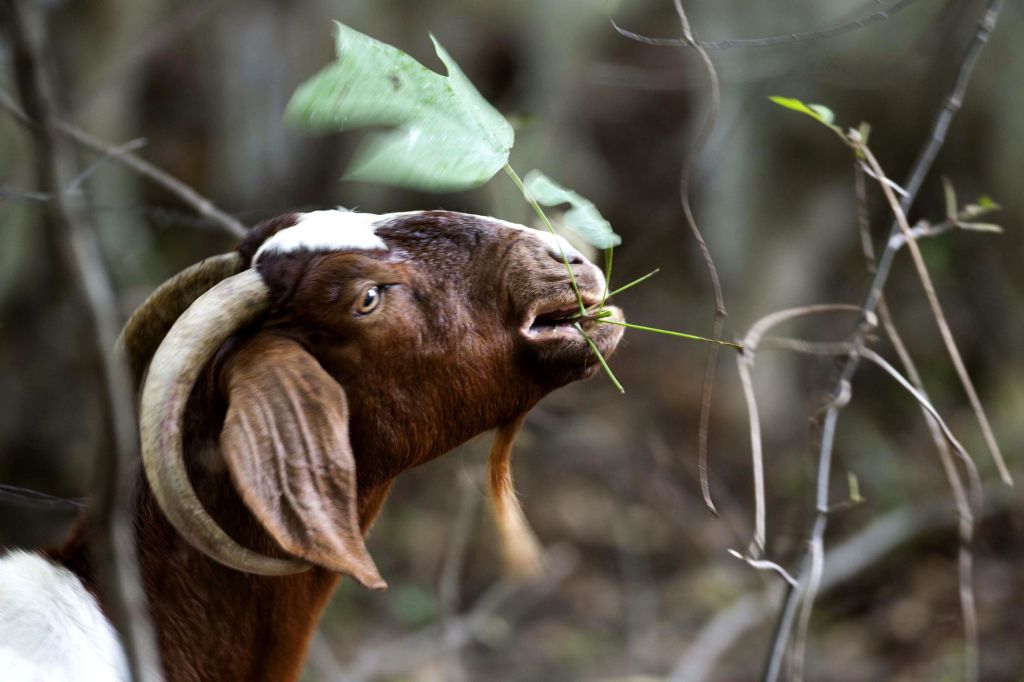 SPENCER — Employment numbers in Spencer increased by about 40 late last week when a herd of goats was delivered to the town’s kudzu gully along the 1300 block of South Salisbury Avenue.

The goats’ mission: Start eating away at the invasive kudzu, which for decades has encased this hollow between Piedmont Radiator Works and Magnolia Gardens.

From Salisbury Avenue, you may or may not have caught a glimpse of the goats yet.

Monday was no different. During an afternoon rain, the herd was spending considerable time at the back end of the property, deep in a gorge where a small tarp has been spread among trees to act as a temporary shelter.

The goats come in all shapes, sizes and ages, working their magic for K.D. Ecological Services, which has been contracted by the LandTrust of Central North Carolina to clean the property in one of the most environmentally friendly ways possible.

“They look cool, they look cute, and I’m really appreciative of all the press they’ve gotten,” says Jason Walser, executive director of the land trust.

An electrified fence has been erected around the large area where the goats are chewing away.

There are some skeptics who question whether the goats can ever win against the kudzu.

“They might control it,” says Buddy Barringer, owner of Piedmont Radiator Works, “but I don’t think they’re going to kill it.”

Barringer says the kudzu has flourished in the vacant area next to his shop since the late 1960s when his father bought the business.

Walser says David Lee of K.D. Ecological Services was looking for every goat he could use on the Spencer site, because as kudzu cleanups go, this is a big one.

The kudzu is thick and deep, and there’s often vegetation underneath it.

“It’s going to be a lot of protein for them,” Walser says.

The kudzu wasteland is technically part of the 42-acre Spencer Woods, which is now owned by the town and managed by the land trust.

The non-profit land trust saved Spencer Woods from clear-cutting, then worked with the town to win $400,000 in state grants to buy the forest and fund a master plan for trails, observation platforms, bridges, benches and other things.

Just this past Friday, Smith reports, Spencer’s Public Works Department finished touching up trailhead markers for Spencer Woods and installed them along Rowan Avenue — all except the southwest trailhead.

The land trust is paying for the goats, which will stay for two to three weeks, come back next June at the peak growing season for kudzu and return again in the fall of 2015.

Getting rid of the kudzu won’t happen overnight — expect the process to take two to three years.

The goats arrived last Thursday evening. Neighbors check on them regularly, as do volunteers for the land trust.

“Neighbors have overwhelmingly continued to be very accommodating, even pleased, with the project and the progress,” Smith says.

Goats increasingly have become a way to combat kudzu and take care of overgrown vegetation in general.

In 2013, with the help of the Pacolet Area Conservancy, the town of Tryon used goats to clear two acres of kudzu on a downtown vacant lot. It took the goat herd just over three weeks to finish its work.

A citizens group in Raleigh recently encouraged the city to consider using goats to help maintain some of its 140 parks.

In June, goats were used in Detroit to chew off the overgrowth in neglected lots in some of the city’s neighborhoods.

And last year, the Congressional Cemetery in Washington, D.C., brought in goats to take care of a poison ivy problem.

There are 15 to 20 trees in the Spencer gully the land trust would like to save. They have been enveloped by kudzu.

As land is cleared, the land trust hopes to plant cover crops and trees to prevent erosion where kudzu is removed. In the end, Walser hopes the restoration ecology returns the tract to the way it was before the kudzu invasion.

But for now, the goats munch on.