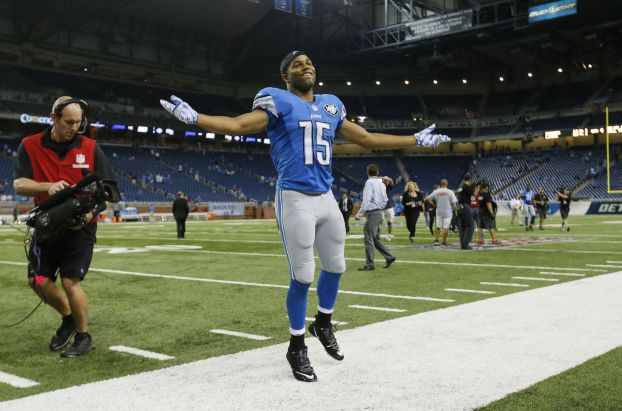 DETROIT (AP) — Matthew Stafford was at his best when improvising — and that alone may be a sign of improvement.
Stafford threw two early touchdown passes to Calvin Johnson, and Detroit beat the New York Giants 35-14 on Monday night in Jim Caldwell’s first game as Lions coach. It was a bright start for the Lions and their quarterback after the team collapsed down the stretch in 2013 — in part because of Stafford’s turnovers.
“I don’t work on my moves a lot during practice, but I know I have to be better with my feet this year so that we can keep plays alive,” Stafford said. “On both of the touchdown passes to Calvin, the offensive line got me a lot of time, and he was able to uncover himself and find somewhere open.”
The Lions intercepted Eli Manning twice in their first Monday night opener since 1971. Stafford went 22 of 32 for 346 yards, and Johnson had seven catches for 164 yards.
Manning was 18 of 33 for 163 yards and a touchdown for the Giants, who started 0-6 last season and never led in their 2014 opener.
“No excuses. We played very poorly,” Giants coach Tom Coughlin said. “We don’t have a lot to be proud of here. Couldn’t move the ball, couldn’t stop them, turned the ball over, got into that business again. Got a punt blocked, so you name it. It was a nightmare performance.”
Stafford scrambled to his right and threw deep to Johnson on the game’s first drive, and defensive backs Dominique Rodgers-Cromartie and Stevie Brown appeared to collide. Nobody else on the Giants was anywhere near Detroit’s star receiver, who was able to jog into the end zone for a 67-yard touchdown.
Later in the first, Stafford scrambled to his left, and then threw back to his right. Johnson made a diving catch in the back of the end zone for a 16-yard TD and a 14-0 lead.
“When Matt breaks the pocket, I know I have to keep working, because he can put the ball anywhere on the field,” Johnson said. “We worked out together a lot during the offseason, and we did a lot of footwork drills. You can see that it is paying off for him. He’s making moves.”
Stafford’s two touchdown passes came on what looked like broken plays, and so did his 5-yard touchdown run in the third quarter. He scrambled up the middle on that one and cut to his left to avoid a potential tackler.
The Giants also missed the playoffs last season, thanks mostly to that terrible start. They were eager to begin on a better note against the Lions, but barely five minutes into the game, defensive end Jason Pierre-Paul went down with a neck injury. He was able to walk off the field, but he was taken in for X-rays.
Pierre-Paul was back in the game in the second quarter.
The Giants revamped their secondary in the offseason, but Stafford took advantage of a couple big breakdowns. In the third quarter, he found Golden Tate for a 44-yard gain on third-and-11, which led to a field goal.
Detroit’s secondary, meanwhile, looked solid despite an injury that kept newly acquired safety James Ihedigbo out of the game. Glover Quin’s interception in the third helped set up Stafford’s touchdown run that made it 27-7.
Johnson tied Herman Moore’s team record with his 107th straight game with a catch. He was banged up down the stretch last season, and Stafford struggled with turnovers as a playoff berth slipped away. Caldwell’s hiring was in many ways viewed as an attempt to help Stafford take another step forward.
The former No. 1 overall draft pick completed his first six passes Monday. Stafford went 14 of 17 for 212 yards in the first half.
Detroit led 14-7 at halftime, and Lions rookie Nate Freese made a 28-yard field goal early in the third, after an interception by DeAndre Levy gave the Lions the ball at the New York 18. Freese added a 27-yarder later that quarter.
Rashad Jennings scored on a 1-yard run for New York in the fourth, but Detroit’s Joique Bell answered with a 3-yard scoring run and the Lions added a 2-point conversion.
“I thought the signature drive of the game was in the fourth quarter. They had cut into the lead, and we knew we needed to grind down the clock,” said Caldwell, who took over in the offseason after Jim Schwartz was fired. “That’s what we mean when we talk about embracing the grind.”
NOTES: Lions offensive tackle LaAdrian Waddle went down with a calf injury in the first half, and cornerback Bill Bentley hurt his knee. Giants linebacker Devon Kennard hurt his hamstring. … There was a pregame ceremony honoring William Clay Ford, who owned the Lions until he died in March. His widow Martha — who took over control of the franchise — and their four children received a game ball after the win.
—

College Football Writer After impressive performances in two of the young season’s most attractive nonconference showdowns, Oregon jumps to No.... read more