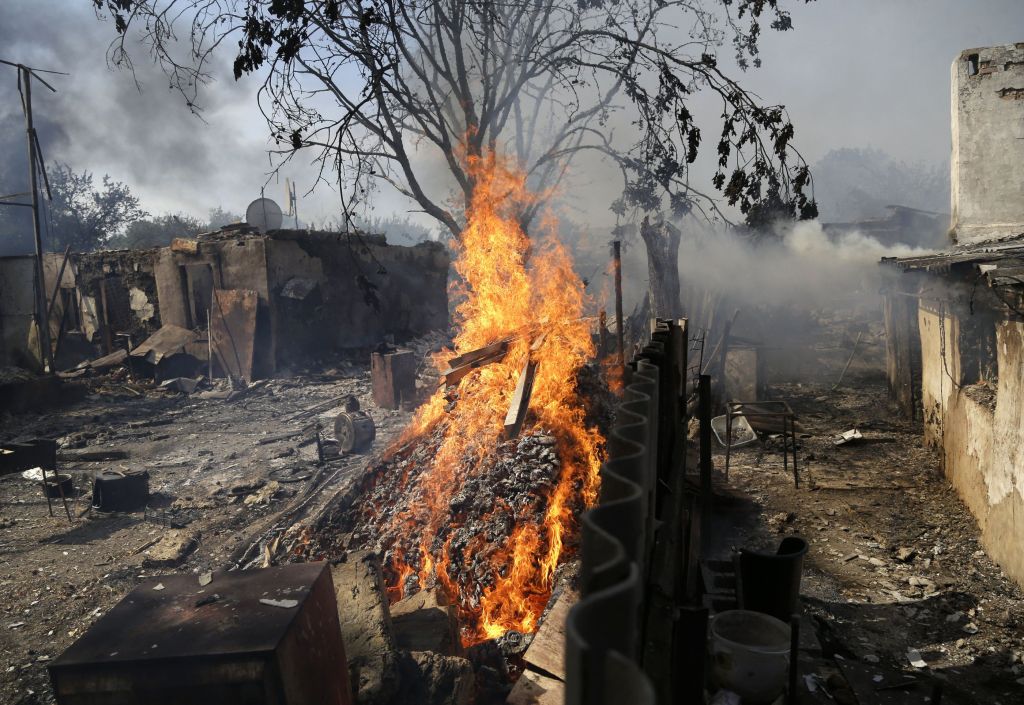 SPARTAK, Ukraine (AP) — Shelling and other clashes between government forces and Russian-backed separatists threw the cease-fire agreement in eastern Ukraine into deepening peril Sunday, two days after it took hold.
At least two houses hit by artillery fire blazed in the rural village of Spartak, which lies just north of the main rebel-held city of Donetsk and adjacent to the airport.
A man whose house was struck by a shell said rebels had fired from a spot nearby, and that apparently provoked a retaliatory attack from Ukrainian government troops.
A group of rebel fighters in the village danced and drank Sunday morning in celebration after what they said was a successful assault on a Ukrainian military encampment in the area. One said the group had captured eight government troops, though no captives could be seen.
The fighter, who gave only the nom de guerre Khokhol, said the truce was not being respected by either side.
“There was mortar shelling around 20 minutes ago here in Spartak,” he said. “There is no cease-fire for anyone.”
The truce — signed on Friday by Ukraine, Russia and the Kremlin-backed rebels after five months of fighting that killed at least 2,600 civilians and forced hundreds of thousands from their homes — was shattered late Saturday by shelling on the outskirts of the coastal town of Mariupol. The city council said Sunday that one civilian was killed and a serviceman wounded.
The rebels recently opened a new front on the coast in what many Ukrainians fear is an attempt to secure a land corridor between Russia and the Crimean Peninsula, which Russia annexed in March.
Amnesty International on Sunday condemned all sides in the grinding conflict, saying they have “shown disregard for civilian lives and are blatantly violating their international obligations.”
Blasts powerful enough to be heard in downtown Donetsk appeared to be coming from the direction of the airport early Sunday morning. The government-held terminal, which has been reduced to little more than a burned-out shell, has been under unremitting attack from separatist forces for months.
A rebel statement said Ukrainian forces fired on their positions in six locations on Saturday, including near the airport, and several rebels were killed.
In Spartak, resident Anastasia Ivanusenko, who moved to Donetsk to escape the fighting, learned her house had been destroyed Sunday as she was coming to pick up some basic items for her child.
“I have a little baby and we are temporarily living in a dormitory. We wanted to get the stroller, some warm clothes for the child,” she said, quietly sobbing on a bench across the road from her burning home. “There was no way to get into the house.”
The 12-point cease-fire agreement, published Sunday by international monitors, calls for the withdrawal of all heavy weaponry, the release of all prisoners and the delivery of humanitarian aid to devastated cities in eastern Ukraine.
The truce also obliges Kiev to give greater powers to the separatist Donetsk and Luhansk regions and calls for local elections to be held in those Russian-speaking areas.
Western leaders voiced skepticism over Russia’s commitment to the deal. A previous 10-day cease-fire, which each side repeatedly accused the other of violating, yielded few results at the negotiating table.
Echoing allegations leveled by the Ukrainian government and NATO, Amnesty International said that it has evidence that Moscow is fueling the conflict by directly supporting the separatist fighters. In making its case, the group presented satellite images appearing to show Russian weaponry being brought into Ukraine.
“These satellite images, coupled with reports of Russian troops captured inside Ukraine and eyewitness accounts of Russian troops and military vehicles rolling across the border, leave no doubt that this is now an international armed conflict,” Amnesty International Secretary-General Salil Shetty said in a statement.