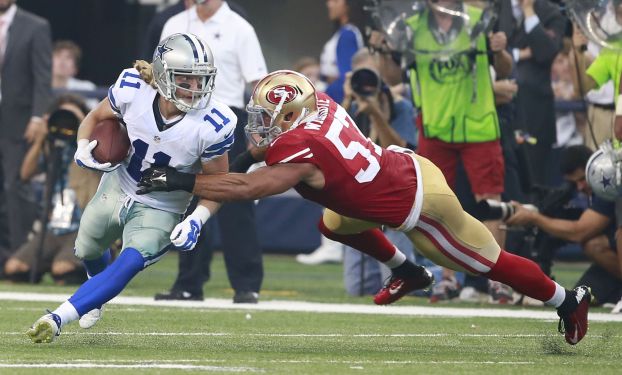 ARLINGTON, Texas (AP) — The Dallas Cowboys could be in real trouble if this is the new version of Tony Romo.
The quarterback’s first meaningful game after back surgery was more like a bad flashback — at least in the first half for Romo and all the Cowboys.
Romo threw three interceptions before halftime, putting Dallas in a big hole before losing 28-17 to the San Francisco 49ers in a season opener Sunday.
“I felt comfortable. Just couple poor decisions that I made,” Romo said. “You’ve got to assess and figure out why you did it and then make sure it doesn’t happen again. You have to manage your mistakes and I didn’t do a good enough job. … I have to play at a higher level, and I will do that going forward.”
Dallas, opening its sixth season in owner Jerry Jones’ $1.2 billion showcase stadium, trailed 21-3 after the first quarter when Colin Kaepernick and the 49ers offense had the ball only four snaps over 94 seconds.
“We are not good enough to come back from that kind of start,” Jones said.
When DeMarco Murray fumbled on his first carry, cornerback Chris Culliver scooped it and rumbled 35 yards for a touchdown. Kaepernick already had his second TD pass to tight end Vernon Davis when he threw a 2-yarder on the next play after Ed Reid’s interception and 48-yard return after a pass intended for Dez Bryant.
Romo tried to go Bryant’s way again late in the second quarter, throwing deep into double coverage. Perrish Cox picked that one off to set up a late drive that put the 49ers up 28-3 at halftime.
“We did some things that we all wished we could have gotten back,” Bryant said.
The surgery last December to repair a herniated disk was Romo’s second significant back procedure in eight months, and kept him out of another season-ending loss to an NFC East rival with a playoff spot on the line. He also had a cyst removed from his back last year.
Throughout offseason workouts and training camp, the Cowboys took it easy on Romo, giving the 34-year-old quarterback plenty of breaks from competitive work and limiting his snaps in his two preseason games.
“He knows exactly what he is doing. He has been in this league for a long time. That’s not the issue. That wasn’t the issue,” Bryant said.
“Tony will be fine, he’ll bounce back,” tight end Jason Witten said. “Our football team doesn’t worry about that. We just know we have to play better.”
Romo, who finished 23-of-37 passing for 281 yards, talked during the offseason about getting healthier and letting fans see “the best version of me” over the next few years.
In the opener of his eighth full season, he had his first three-interception game since a 2012 season-ending loss at Washington in a winner-to-the-playoffs game. Romo had only 10 picks in 15 games last season.
The Cowboys were at San Francisco’s 5 early in the second quarter when Romo missed a wide open Dwayne Harris and instead try to get a pass to Witten. The ball was caught by linebacker Patrick Willis.
Even when the 49ers had to punt on that drive, the Cowboys had only four snaps before Romo’s third interception, leading to another touchdown.
“Three plays in a game can change the entire game, and that’s what happened,” he said.
Notes: Murray finished with 22 carries for 118 yards and a 2-yard TD late in the third quarter. It was Murray’s 12th career game with at least 20 carries — the first Dallas lost. … The Cowboys are 22-19 at home since 2009, and this was only the fourth loss by double figures. … Dallas had won its last three home openers. … 49ers RB Frank Gore had 63 yards rushing, becoming the 29th NFL player with 10,000 for his career. He’s also the 10th player with 10,000 yards and 10 seasons with the same team. … Bryant stayed down for several moments after Reid’s interception return and later was treated for dehydration. He had four catches for 55 yards.

RALEIGH, N.C. (AP) — North Carolina State is getting the hang of finishing with a flourish. Shadrach Thornton rushed for... read more