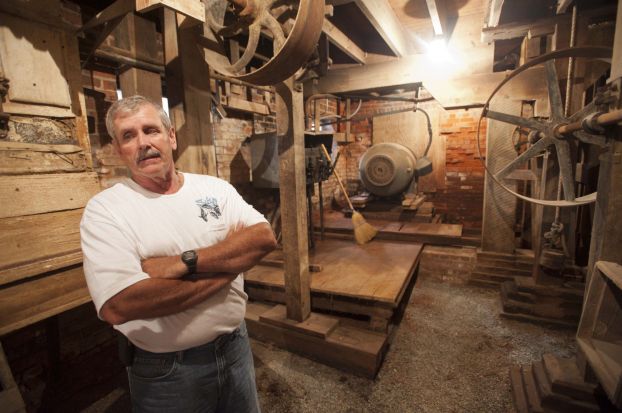 CHINA GROVE — The space is silent now. But if you stand really still and listen, you can feel the vibration of the sifters and hear the hum of the motors and the loud rumble of the mill itself. And if you squint just right, you can see the fine powder of flour in the air.
Or maybe that’s just the late-afternoon sunlight filtering down on dusty equipment.
In its heyday, the China Grove Roller Mill could grind 400 pounds of flour every 28 minutes. The basement housed the huge motors and wheels that powered the elevators to convey the wheat up and down four stories, up, down, up, down, until the final product was attained.
For the first time, the basement will be open for tours at the roller mill. The event is set from 2 to 4 p.m. Sunday, Sept. 14, at the mill in downtown China Grove.
The lower level of the roller mill represents the last piece of clean-up work for renovation led by the Historical Society of South Rowan that began in 1996. The mill, which ran for 100 years, closed the year before.
For 48 of those years, Jack Miller ran the mill. He died in 2005. His son, James, worked with him from 1973 to 1995.
“I used to go down them better than I do now,” James says, maneuvering carefully down the basement’s steep steps.
The mill was originally built as a flour mill but diversified over the years to make all sorts of animal feed, James says. He has an encyclopedic knowledge of the mill.
“You won’t forget this,” he says of the roller mill’s inner workings.
If so inclined, visitors can walk from the bottom to the top to learn how flour was made.
“It has to start with the wheat,” James explains. In all, six separate mills within the building were used to make flour. “It hits the first mill, and the first mill cracks the grain.”
The first two mills cracked and removed husks and other debris from the grain. Giant sifters on the top floor were also used in the process. From there, the wheat ran through four other mills, resulting in a progressively finer grind. James slides back a panel to reveal metal cups that scooped up the grain via conveyor.
The flour was delivered weekly to small grocery stores in China Grove, Landis, Kannapolis, Midway, Harrisburg and Charlotte. There were three other flour mills in Salisbury, Cleveland and Rockwell, James says, so they went in the other direction so as not to compete. When Food Lion opened, the mill supplied that grocery chain.
A peek at the 1941 ledger shows entries in pencil for deliveries to a number of individuals and grocery stores: Stirewalt Bros., Cash Grocery, Cope & Blume, Honeycutt, Martin & Son, Moose & Son, Lentz & Co., Sandy Ridge.
But it became harder to compete with mills that could make flour faster and cheaper, James says, hence the closing nearly 20 years ago.
When the mill first opened, it was powered by steam. But that equipment was taken out long ago. And James and his brother, John, sold a lot of equipment when the mill closed, not knowing there’d be so much interest in it two decades later.
One piece of equipment remaining in the basement is a 6-foot wheel. It drove all the equipment in this area.
“I think I stood in it before,” James remembers.
Many belts still cover the wheels, and visitors can still see how they were frequently patched with staples and catgut.
“You just fix it, start over and run some more,” John notes.
At the bottom of the stairs is an old black telephone with a rotary dial on top, long out of use. James thinks he still remembers the phone number and reels it off, only to realize later that was his dad’s phone number.
“I was close,” he says. Jack Miller’s number was indeed similar to the Roller Mill’s.
Back on the first floor, James shows where the flour was bagged — in increments of 5, 10, 25, 50 and 100 pounds.
“Here’s where we packed it out,” James says.
A large, black stove once sat nearby — the only source of heat in the building, the open windows providing the only air conditioning — and served as a gathering spot for local famers.
But James didn’t stay there long.
“We were going to all the floors all the time,” he says.
A man-lift helped a lot. James would jump on a small wooden platform that moved continuously up and down the mill’s four floors. For many years, there was no railing, but there was a sturdy handle.
When the roller mill ran for a couple of hours, it tended to get clogged because it got so hot, so you’d have to jump on the man-lift, James says, to determine where the clog was and clean out that specific mill.
The top floor in late afternoon is nearly like an oven, the air thick and still.
“I probably spent as much time here on this floor as I did every other floor,” James says. “You could just tell what was going on from up here.”
When James left the roller mill, he wanted something different, so he went to work for Freightliner, where he’s been ever since.
On days like this when he returns to the roller mill, he can probably still hear the mill running, and see the fine flour powder filling the air.
Good memories.