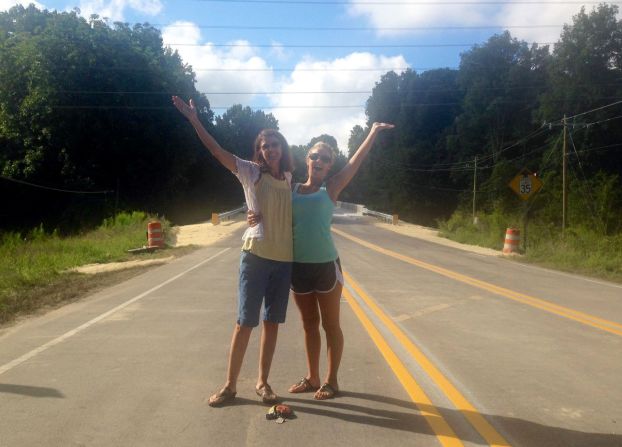 Two thumbs up and a big smile are what Mary Scott Norris gave an N.C. Department of Transportation crew as she crossed over the new West Innes Street bridge Saturday, open two days earlier than the DOT had announced.
The Catawba College sophomore joked with her family throughout the seven-month construction project that she should be the first to cross the new bridge. The road closing turned her 60-second commute to class into a 15-minute journey through early morning elementary and middle school traffic last semester.
The Norris family joke was Mary Scott was probably one of the most inconvenienced people in town.
But she was far from alone. Motorists who normally traveled West Innes Street destined for U.S. 601, Mocksville or any route in between had to take a detour.
Located between Catawba College and the entrances to the Crescent and Eagle Heights subdivisions, the bridge closed in early February.
The 74-year-old structure was replaced because it couldn’t handle the weight limit required on state roads.
The new bridge was scheduled to open Monday, but the Norris family was keeping an eye on it.
Norris has moved on campus, but she held to the possibility of being the first to cross the new bridge once it opened.
Her mother, Leigh Ann, went to the bridge around 8:30 a.m. Saturday, and the crews told her they were almost done.
“He said they were going to open it today,” Norris said.
The crews still had to paint lines on the road when Norris went to the site at 9:30 a.m., so she waited an hour and a half.
A DOT employee blocked traffic and snapped a photo as Mary Scott drove across, arms stretched out the window and sunroof with happy thumbs up.