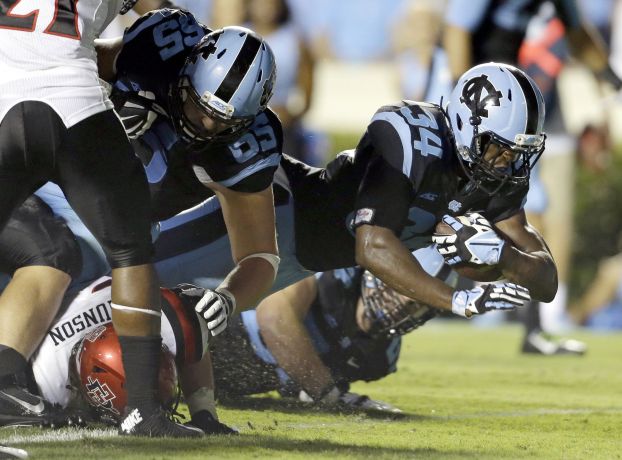 CHAPEL HILL, N.C. (AP) — Make it two rallies in two weeks for No. 21 North Carolina, which erased a two-touchdown deficit in the second half and then held on to beat San Diego State 31-27 on Saturday night after Tim Scott’s interception in the end zone with 14 seconds left.
“I think that’s a great thing — we played our best ball when we were down,” coach Larry Fedora said. “I would much rather have it that way than the other way. … We’re going to be in that situation. We know how this team’s going to respond.”
Marquise Williams threw two second-half touchdown passes and freshman Elijah Hood rushed 2 yards for the go-ahead score with 8:01 left for the Tar Heels (2-0).
Last week, they trailed Liberty of the FCS in the third quarter before taking control with a flurry of turnovers.
They escaped an even bigger hole against the Aztecs: North Carolina trailed by 14 points with less than 5 minutes left in the third quarter before scoring on four straight possessions to take a four-point lead, then came up with a timely defensive stand to earn its first 2-0 start under its third-year coach.
Quinn Kaehler threw for a career-high 341 yards with a touchdown, then led the Aztecs (1-1) to a first-and-goal from the North Carolina 3 in the final minute.
His quick pass in the end zone to Lloyd Mills was jumped by Scott for the game-sealing interception.
“When the receivers saw that we were (pressing them), they communicated to each other for a pick,” Scott said. Mills “ran a wheel route and he was running out of end zone, so I decided to look at the quarterback and he threw it (to Mills’) back shoulder.”
Kaehler was picked off three times: the first was returned for a touchdown, the second set up a late field goal and the third effectively ended the game.
“It’s always disappointing when your quarterback throws interceptions,” San Diego State coach Rocky Long said. “But Quinn is a competitor. He’s trying to make a play to win the game.”
Kaehler finished with a 56-yard touchdown pass to Eric Judge, and Donnel Pumphrey rushed for 100 yards with scoring runs of 12 and 3 yards for San Diego State, which led 21-7 late in the third quarter before Williams and the North Carolina offense finally started clicking.
Williams threw TDs covering 91 yards to Mack Hollins — the third-longest TD pass in school history — and 11 yards to Quinshad Davis. Brian Walker picked off two passes, returning the first one 100 yards for an early touchdown.
After Danny Hageman’s second field goal of the fourth quarter, a 40-yarder with 10:30 to play, made it 27-21, the Tar Heels went 80 yards in eight plays and reclaimed the lead for good. Hood’s first career touchdown run made it 28-27 — their first lead since early in the second quarter.
Walker then picked off Kaehler’s pass and took it 26 yards to the San Diego State 14. That set up Nick Welier’s 23-yard field goal with 4 minutes left that forced San Diego State to go for the end zone on its final possession.
The Aztecs certainly appeared on their way to a rare Eastern victory after Pumphrey put them up by two touchdowns with his scoring run on the opening drive of the second half.
That turned out to be the wake-up call the Tar Heels needed, with Williams throwing for TDs on consecutive possessions to get North Carolina back in the game.
The first came on a short fade pattern in the end zone to Davis.
The second was spectacular.
One play after San Diego State pushed its lead back into double figures, the Tar Heels went deep: Hollins slipped behind cornerback J.J. Whittaker near midfield and pulled in Williams’ pass in stride on his way to the longest pass play by a Tar Heel in the history of Kenan Stadium.
It wasn’t even the longest play of the day.
That belonged to Walker, who picked off Kaehler’s overthrown pass about a yard deep in the end zone and took off down the right side for the game’s first touchdown.
“It was really an amazing night for him,” Fedora said.
He was one of the four players who were suspended for the Liberty game for what Fedora called a violation of team policy. The violation was undisclosed though those suspensions came a day after a Yahoo Sports report of an alleged hazing altercation that left a freshman walk-on receiver with a possible concussion.
Walker was not made available to the media after the game. Team spokesman Kevin Best called it a coach’s decision.
———
Follow Joedy McCreary on Twitter at http://twitter.com/joedyap