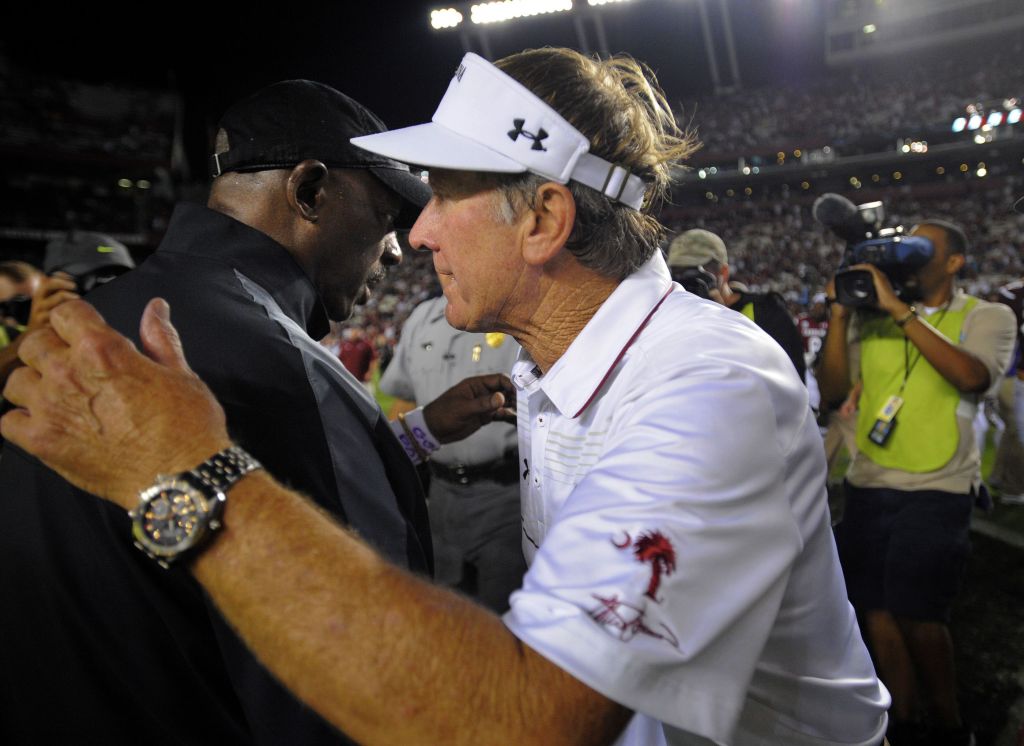 COLUMBIA, S.C. — Steve Spurrier was much happier about South Carolina’s improved performance than about his lastest career milestone.
The 21st-ranked Gamecocks bounced back from an embarrassing opening-week loss to Texas A&M with a 33-23 victory over East Carolina on Saturday night. Mike Davis rushed for 101 yards and two touchdowns, the offensive line controlled things during a fourth-quarter drive of nearly 11 minutes and the defensive forced a pair of turnovers and blocked a field goal — all which Spurrier considered far more important than his 200th career win as a Southeastern Conference coach.
“This was a good win,” Spurrier said. “It was a fun one.”
Certainly a lot more fun than the last one, when the Gamecocks (1-1) were run of their building in a 52-28 loss to the Aggies. Davis managed just 15 yards before leaving with bruised ribs and South Carolina’s defense allowed a school-worst 680 yards.
“It worked out for us,” Spurrier said. “Not quite as talented as some of our teams in the past, that’s obvious. But the kids hung in there.”
The Gamecocks (1-1) trailed 13-7 early on with the Pirates (1-1) threatening to put another Aggie-style beating on them. But behind Davis’ grinding runs and the defense’s improving play, South Carolina found its footing in its first win of the season.
Spurrier became the third person ever with that many wins while coaching SEC teams. Only Paul “Bear” Bryant with 292 and Vince Dooley with 201 have more than the head ball coach. Spurrier can tie Dooley next week against his old team when the Gamecocks host No. 6 Georgia at Williams-Brice Stadium.
Did the head ball coach think much about the achievement?
“Oh, I hadn’t really thought about that, I was hoping to get a win,” he said. “I was worried about going into the Georgia game 0-2.”
The Gamecocks got four field goals from Elliott Fry and a 16-yard touchdown pass from Dylan Thompson to K.J. Brent.
East Carolina closed to 30-23 on Cam Worthy’s 17-yard TD catch with 12:03 left. But the Gamecocks went on a nearly 11-minute drive, finishing with Fry’s 20-yard field goal with 1:30 left to put the game away.
The series lasted 18 plays, the last 13 of them on the ground.
“Everybody in the stadium knew where the ball was going and we still had success with it,” Thompson said.
East Carolina quarterback Shane Carden threw for 321 yards, the second time in as many weeks the Gamecocks have given up big passing numbers after the Aggies’ Kenny Hill threw for 511.
Pirates receiver Justin Hardy had 11 catches for 133 yards.
South Carolina was desperate to show some polish on offense and toughness on defense. But it was the Pirates of the American Athletic Conference who got the jump on things. Carden looked a lot like Texas A&M record-setter Hill, completing long passes and quickly moving East Carolina down field for a pair of field goals and Chris Hairston’s 10-yard TD run to move in front 13-7.
But Davis, who last year gained 1,183 yards, turned things the Gamecocks’ way.
The junior had missed the second half against Texas A&M with bruised ribs — and a sizeable Aggies lead — and didn’t start this one. He got going late in the opening quarter with his twisting, 36-yard touchdown run helped by some solid downfield blocks by tight end Rory Anderson and receiver Shaq Roland.
Davis put the Gamecocks ahead to stay in the second quarter. He took a sideline swing pass from Thompson 19 yards to the East Carolina 3, then finished off the drive on the next play for a 17-13 lead.
It was Davis’ first 100-yard effort in six games since rushing for 128 in a win over Mississippi State last Nov. 2. And Davis vowed he wouldn’t let lingering bumps and bruises keep him from facing Georgia and their backfield star, Todd Gurley.
“I feel good. I don’t remember the injury,” Davis said.
For East Carolina, this was the start of a three-game stretch against programs from the “Power Five” conferences. The Pirates take on Virginia Tech and North Carolina the next two weeks.
“This is a tough loss but we’re right back at it next week against a very good team,” said Carden, the quarterback. “We can’t dwell on this.”
South Carolina’s defense stiffened up after a rough start against the Pirates. The Gamecocks gave up 195 yards in the opening period and just 82 in the second quarter.
Defensive lineman Gerald Dixon Jr. ended another drive by blocking Harvey’s 42-yard field goal try late in the second quarter. It was the Gamecocks first blocked field goal since 2011 when current Buffalo Bills cornerback Stephon Gilmore did it against Tennessee.