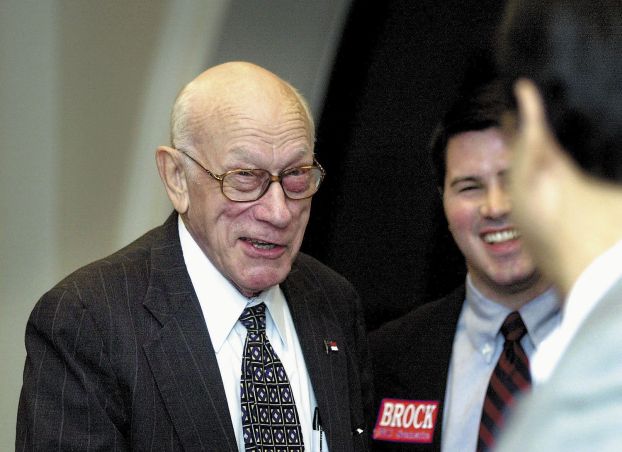 McCombs to be honored on Faith Road

Just over a decade after his death, Eugene McCombs will be honored on the road named for the place he called home nearly all of his life.
Faith Road begins on the east side of Salisbury. After leaving the Salisbury city limits, the road winds its way past subdivisions, heavily wooded forests and eventually passes right by a small building once named McCombs and Co. Faith Road ends just west of Rockwell, at its intersection with N.C. Highway 152.
Street addresses won’t change, but Faith Road could soon become McCombs Highway after two municipalities and the Rowan County Commission forwarded resolutions expressing support for the honor to the North Carolina Department of Transportation. Salisbury passed a resolution on Aug. 5. Faith’s came on Aug. 12. The Rowan County Commission approved the last resolution needed to honor McCombs on Tuesday.
McCombs, a Republican, is universally described as a top-notch, hard-working politician.
His political career began in Faith, where he served on the town board from 1948 to 1961. He was mayor of Faith from 1959-1961. McCombs served on the Rowan County Board of Commissioners multiple times and was chairman for 10 years.
He took Rowan County’s concerns to Raleigh as a member of the N.C. House of Representatives in 1993. He continued serving as a state representative until his death in January 2004.
Charlie Walters, who was a Republican commissioner with McCombs and helped organize the three resolutions, said the commissioners always worked harmoniously with McCombs on board.
“Never one time did I see anything either by word or deed that was not in the best interest of Rowan County,” Walters said.
Walters mentioned a specific memory that illustrated McCombs hands-on leadership style.
“He would spend Tuesday afternoon, that’s when his store was closed, signing each check that was going to be mailed out with pen and ink,” Walters said. “It was his way of seeing where the county’s money was being spent. You’re not going to see that much any more.”
The board’s makeup changed multiple times when McCombs and Walters were both commissioners, but they never skipped a beat, Walters said.
“Whether Eugene was chairman or not, we always worked together; politics never entered into it,” he said. “I think we accomplished far more working like that than going at each other.”
Bipartisan support for McCombs was clear in late 1980, when the commissioners were in need of a new chairman. With no discussion, Commissioner Jim Cohen, a Republican, nominated McCombs to head the board again. The motion was seconded by Rufus Honeycutt, a Democrat. McCombs became the chairman by a unanimous vote.
“You just can’t say enough about him,” said Hall Steele, a Democrat who served with McCombs on the commission. “There was never some other agenda. It was absolutely just county business.”
When McCombs ran for statewide office, he called on Marny Hendrick to be his campaign manager.
Hendrick described McCombs as a true gentleman who never said anything negative about his competition.
“That was one of the things I admired,” Hendrick said. “He was a down-to-earth politician.”
McCombs was also politically savvy, Hendrick said.
“He was one of the first politicians that recognized the importance of getting votes from the unaffiliated voters,” he said.
With resolutions passed, one of the last steps is getting the N.C. Department of Transportation’s approval.
Walters said he planned to have a ceremony for the Faith Road recognition following the DOT’s approval of the resolution.
Signs are likely going to be placed at the beginning and end of McCombs Highway, which will begin at Faith Road’s intersection with Jake Alexander Boulevard.
Walters said he’d also like to raise enough money to put a third set of signs in front of McCombs’ former store in Faith.
Walters said he hopes to complete the entire process before the end of 2014.