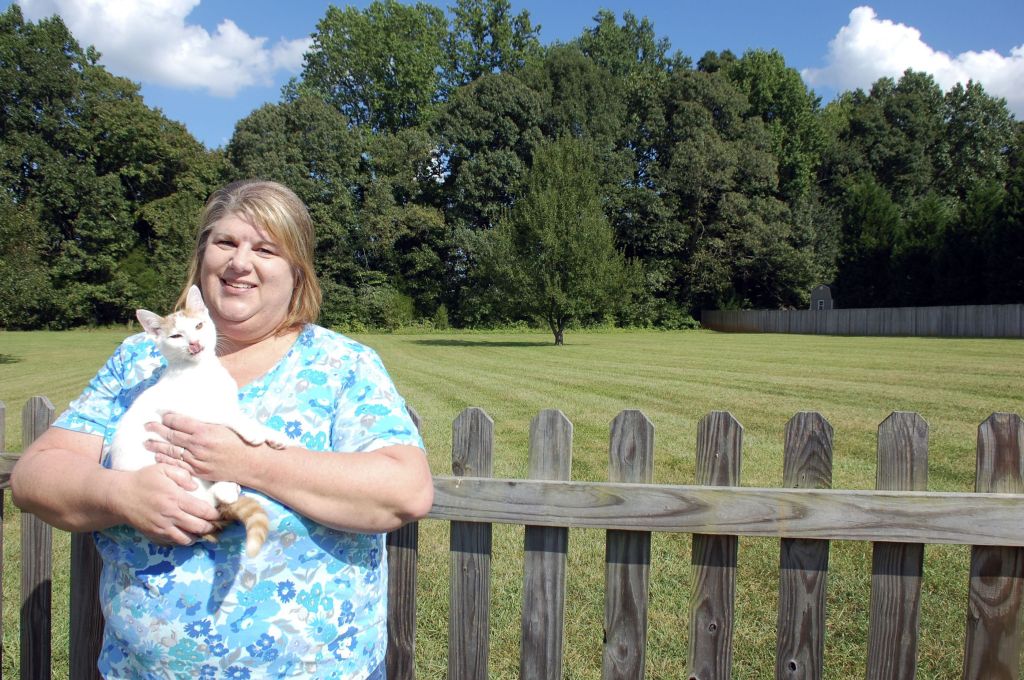 SALISBURY — Rebecca Pressley didn’t receive the telephone call about Snowball until later that morning, after she had left home for a dental appointment.
But her next-door neighbor was upset, having seen and heard the ruckus outside a back window from her own home about 4:30 a.m.
Two dogs had corralled something white, and they were taking turns shaking it in their teeth. That white thing was Snowball, Pressley’s cherished cat, and the women both determined later those weren’t dogs, they were coyotes.
Until then, they hadn’t realized coyotes were so close, roaming in the woods bordering their Grace Ridge subdivision near Knollwood Elementary School.
“It was really just devastating,” Pressley says.
Tufts of white hair floated through her backyard most of that day.
By now you know coyotes are entrenched in Rowan County and pretty much the other 99 counties in the state. As Sgt. Tony Sharum of the N.C. Wildlife Commission says, “They’re part of the ecosystem here.”
Over recent years, coyotes have been spotted in Salisbury neighborhoods such as Eagle Heights, where Vickie Heidt lost a chihuahua named Yippie to the predators.
Coyotes are listed among the wildlife inhabiting Catawba College’s 189-acre Ecological Preserve.
Sharum says they live in all parts of Rowan County, rural to urban. The more they get used to being around people, houses and noise, the bolder coyotes seem to get, and the more people see them.
It’s bad news for domestic cats and small dogs, which opportunistic coyotes often view as snacks. To coyotes, small animals that are not protected are like invitations to go through the drive-through at McDonald’s and pick up some quick food, Sharum says.
Sharum doesn’t allow his own small dog to roam free in the back yard without being with him.
As I spoke with Pressley this past week about her loss of Snowball, I couldn’t help but remember something Dr. Jon Shaw, a biologist with the Wildlife Resources Commission, had told me in 2011 when we were talking about coyotes.
“If a coyote kills a neighborhood cat,” Shaw said, “you’re more aware of them.”
Pressley went through her neighborhood letting people know coyotes were close by and to take precautions with their pets. “I just don’t want anybody else to go through this,” she says.
Until Snowball’s death, Pressley hadn’t paid attention, but now she hears the nighttime howls of coyotes, which to her sound like little kids screaming or squealing.
She also did some internet research on coyotes to learn about some of their characteristics or habits. She found out they can jump fairly high, and she says they stalk and hunt by looking for patterns from their prey.
Snowball always had a nighttime habit, for example, of squeezing through the slats of her backyard fence and meandering over to her neighbor’s yard.
“When they attack,” Pressley says, “it’s to bring back food to the pack.”
From their stands, deer hunters probably come across coyotes more than anyone else, often near dusk or in the early mornings. Though coyotes are usually nocturnal animals, the frequency of people seeing them during the daylight hours has increased, just because more of their fear factor is gone, Sharum says.
The fact is coyotes have been in western Rowan County for the past 25 years and, as everywhere else, they quickly spread eastward.
A 2012 report from the N.C. Wildlife Resources Commission described coyotes as the most adaptable animal in North America. Between 2010 and 2011, hunters killed 36,041 coyotes in North Carolina.
That was an 85 percent increase over five years.
Coyotes eat a lot of things, including fruit, berries, insects and even frogs. They prey on wildlife such as squirrels, rabbits, foxes, mice, raccoons, opossum and deer. But as they’ve lived closer to humans, they added pets, livestock, pet food and road-kill to the list.
Sharum says it’s a myth that coyotes have diminished the deer population, which he describes as exploding. Just ask any farmer who has a soybean field, he says.
When it comes to deer, Sharum says, coyotes tend to prey on the sick and young.
Ask around, and you quickly learn farmers have been dealing with coyotes for many years. Coyotes have a taste for calves, goats, lambs and chickens.
Farmers have fought back with guns; fences; making changes in their lambing, kidding and calving seasons; sonic and visual repellents; trapping; guard dogs and other animals naturally aggressive toward coyotes.
I learned back in 2011 that many farmers put donkeys in the pastures with their other animals to ward off coyotes. Donkeys just seem to have an innate hatred of coyotes, which look like a medium-sized dog and weigh between 20 and 45 pounds.
For hunters, it’s open season year-round on coyotes — every day of the week, except Sundays. If they are posing a threat to you, your pets or livestock, you can shoot them on Sundays, too.
Local taxidermists have been stuffing a lot more coyotes in recent years.
Back at the Pressley household, Rebecca keeps a closer check these days on her family’s five cats — Tiny, Carson, Belle, Herbie and Callie — and their two small dogs, Gizzy and Sushi. Most of her pets are rescue animals, such as Snowball.
Pressley, a home-care nurse, said she saved Snowball from a patient’s home in 2011. Snowball was about three months old then, sick and eaten up with fleas.
She took him home and nursed him back to health, and he became part of the household. Pressley says Snowball had amazing blue eyes.
“He was my best friend,” she says. “He was such a sweetheart. He knew I had saved his life.”
During the summer, Snowball was mostly an outdoors cat. He loved the woods behind the Pressleys’ house and, in the end, that probably did him in.
“Never did I think it would happen here,” Pressley says. “I just want to make people aware.”
Contact Mark Wineka at 704-797-4263, or mark.wineka@salisburypost.com.