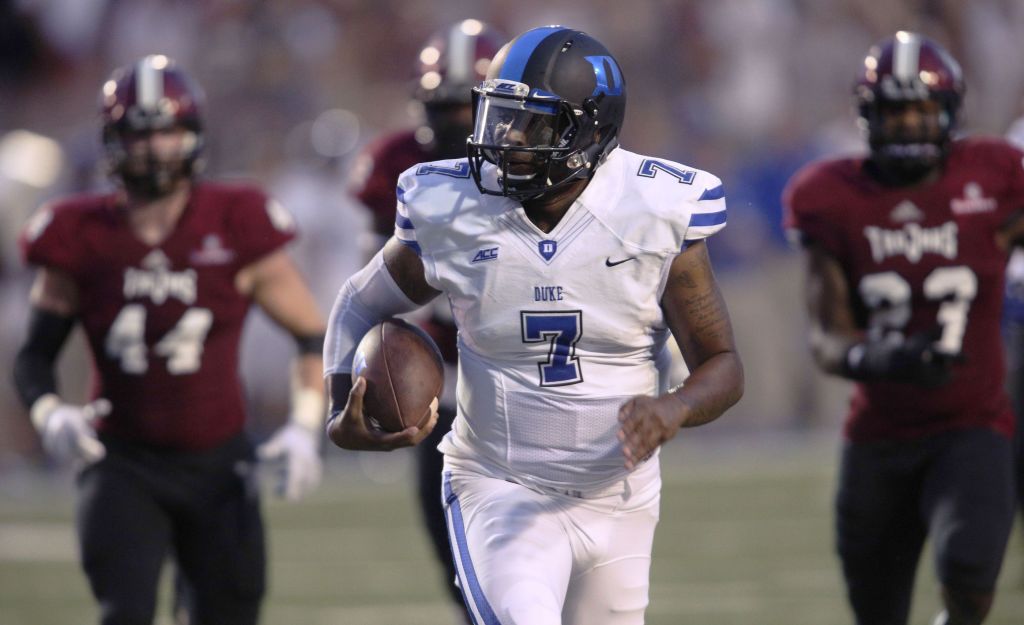 TROY, Ala. (AP) — Anthony Boone passed for 268 yards and a touchdown and ran for two more scores to lead Duke to a 34-17 victory over Troy on Saturday night.
The Blue Devils (2-0) trailed 14-3 in the second quarter before Boone sparked the comeback with a 30-yard TD run.
He was 27-of-41 passing and gained 47 yards on nine carries. It’s the second time he has had a pair of TD runs in a game, having also done it against Wake Forest in 2011.
The Trojans jumped ahead by 11 points on Jordan Chunn’s 1-yard run to start the second quarter but couldn’t cash in with touchdowns on several promising drives after that
Boone and Duke scored 21 points in a 7:18 span for a 24-14 halftime lead. Troy only managed a field goal after that.
Wake Forest 23, Gardner-Webb 7
WINSTON-SALEM, N.C. (AP) — John Wolford shook off three interceptions to throw for 291 yards and two touchdowns, and Wake Forest used a stifling defense to beat Gardner-Webb on Saturday night and give new coach Dave Clawson his first victory.
A true freshman, Wolford completed 30 of 38 passes, with both scores going to E.J. Scott. Mike Weaver kicked three field goals and Wake Forest (1-1) limited the FCS’ Runnin’ Bulldogs (0-2) to 131 yards.
After being held to three field goals in a lackluster first half, the Demon Deacons took control in the third quarter following a lightning delay of just under an hour.
Wolford completed all six passes on the first drive of the second half, including a 10-yard TD pass to Scott to end a six-quarter drought without an offensive touchdown.
Wolford’s 14-yard TD pass to Scott made it 23-0 early in the fourth quarter.
No. 21 South Carolina 33, East Carolina 23
COLUMBIA, S.C. (AP) — Mike Davis ran for 101 yards and two touchdowns as No. 21 South Carolina bounced back from an embarrassing opening-week loss to Texas A&M to hold off East Carolina 33-23 on Saturday night.
The Gamecocks (1-1) trailed 13-7 early on with the Pirates (1-1) threatening to put another Aggie-style beating on them. But behind Davis’ grinding runs and the defense’s improving play, South Carolina found its footing in its first win of the season.
The victory was Steve Spurrier’s 200th as a Southeastern Conference coach. Only Paul “Bear” Bryant with 292 and Vince Dooley with 201 have more. Spurrier can tie Dooley next week against his old team when the Gamecocks host No. 6 Georgia at Williams-Brice Stadium.
The Gamecocks got four field goals from Elliott Fry and a 16-yard touchdown pass from Dylan Thompson to K.J. Brent.
East Carolina closed to 30-23 on Cam Worthy’s 17-yard TD catch with 12:03 left. But the Gamecocks went on a nearly 11-minute drive, finishing with Fry’s 20-yard field goal with 1:30 left to put the game away.
East Carolina quarterback Shane Carden threw for 321, the second time in as many weeks the Gamecocks have given up big passing numbers after the Aggies’ Kenny Hill threw for 511.
Pirates receiver Justin Hardy had 11 catches for 133 yards.
No. 21 North Carolina 31, San Diego State 27
CHAPEL HILL, N.C. (AP) — Tim Scott’s interception in the end zone with 14 seconds left preserved No. 21 North Carolina’s 31-27 victory over San Diego State on Saturday night.
Marquise Williams threw two second-half touchdown passes and freshman Elijah Hood rushed 2 yards for the go-ahead score with 8:01 left for the Tar Heels (2-0).
They trailed by 14 points with less than 5 minutes left in the third quarter before scoring on four straight possessions to take a four-point lead, then made a late defensive stand to earn their first 2-0 start under third-year coach Larry Fedora.
Quinn Kaehler threw for a career-high 341 yards with a touchdown, then led the Aztecs (1-1) to a first-and-goal from the North Carolina 3 in the final minute.
With North Carolina trailing 21-7, Williams threw TDs covering 91 yards to Mack Hollins — the third-longest TD pass in school history — and 11 yards to Quinshad Davis. Brian Walker picked off two passes, returning the first one 100 yards for an early touchdown.
After Danny Hageman’s made it 27-21, the Tar Heels went 80 yards in eight plays to reclaim the lead.
Charlotte 56, Johnson C. Smith 0
CHARLOTTE—It was a record-setting rout at Jerry Richardson Stadium on Saturday. Charlotte beatdown Johnson C. Smith 56-0 to get the first shutout and largest margin of victory in program history in one fell swoop.
Running back Kalif Phillips ran for two touchdowns in the first quarter, and quarterback Matt Johnson connected with T.L. Ford for a 24-yard touchdown pass as the 49ers built a 23-0 lead in the first quarter.
Phillips got his third rushing touchdown of the game with 12 minutes, 32 seconds left in the first half. Through two games in the 2014 season, Phillips has run for six touchdowns. He ended the day with 41 yards riushing on 10 carries and 21 yards receiving on one catch.
Quarterback Matt Johnson was 13 for 18 for 285 yards and a touchdown. TRent Bostick hauled in a team-high four catches for 92 yards. Chris Montogmery had two catches for 77 yards.
The Golden Bulls were held to 197 yards on offense.
Appalachian State 66, Campbell 0
BOONE, N.C. (AP) — Kameron Bryant threw two touchdown passes and Marcus Cox ran for 114 yards and two scores Saturday in Appalachian State’s 66-0 rain-delayed rout of Campbell.
The Mountaineers (1-1) held the Fighting Camels (0-2) to 58 total yards in the first half and scored on every possession to lead 45-0 at halftime before heavy downpours delayed the game for about 40 minutes.
Appalachian State racked up 538 yards, including 293 yards rushing, and held Campbell to 95 total yards.
Bryant was 10 of 17 for 149 yards passing, including scoring strikes of 12 yards to Simms McElfresh and 21 yards to Barrett Burns. Backup Taylor Lamb hit McElfresh with a 39-yard TD pass for a 38-0 lead.
Ricky Ferguson scored on runs of 11 and 7 yards and Terrance Upshaw had a 10-yard TD run. Doug Middleton intercepted a pass by Riley Gallaher and returned it 52 yards for a score.