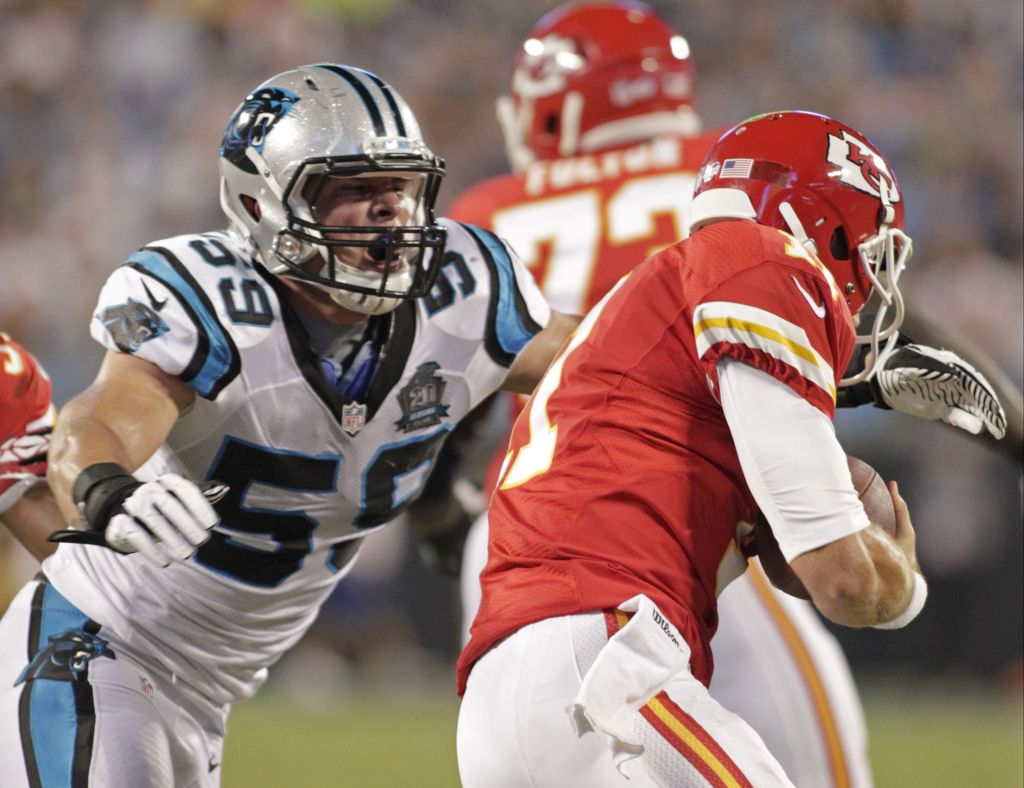 TAMPA, Fla. (AP) — Two-time Pro Bowl defensive tackle Gerald McCoy stood in a corner of the locker room sizing up the challenge the Tampa Bay Buccaneers face opening the season against Cam Newton and the defending NFC South champion Carolina Panthers.
The Bucs haven’t made the playoffs since 2007, a drought that’s prompted three coaching changes in five years, including the hiring of Lovie Smith last winter.
The Panthers, meanwhile, won 12 games to match a franchise record, with an improved Newton re-establishing himself as one of the NFL’s up-and-coming stars.
Carolina dominated Tampa Bay twice along the way, and McCoy hasn’t forgotten.
“Right now our identity is we’re a 4-12 team. Until we change that, that’s who we are,” McCoy said. “Until somebody changes who Carolina is, they’re the division champs.”
The task begins Sunday.
The notion of going from worst to first in the NFC South isn’t farfetched. It’s happened six times since the division was formed in 2002, and the Bucs, Panthers, Falcons and Saints have all finished first three times.
Interestingly, no team has won titles in consecutive years.
“I think everybody has been talking about that, and we obviously know about it,” Carolina linebacker Luke Kuechly, the 2013 NFL defensive player of the year, said.
Not that the Panthers fancy themselves as history buffs.
“Our goal is the same as it is every year, and that’s to go out and win the division. I don’t think it really matters if we’re supposed to win or if we’re not supposed to win. … The mindset is to go out there and win the division,” Kuechly added. “I think that’s all 32 teams’ goal. … All of the talk outside of the team, and all of the other stuff is just talk.”
With Newton leading the way, the Panthers swept the season series a year ago by a combined 58-19. The young quarterback threw for two touchdowns and ran for one in each game.
“He got comfortable. He’s not a guy you want to get comfortable,” McCoy said. “He’s one of the best escape artists we have in this league. If you give him too much time, he’ll kill you with his feet or his arm. We’ve got to be all over him.”
Newton had ankle surgery during the offseason and has been slowed the past two weeks by a rib injury he’s said will not stop him from playing.
“I’m being optimistic about this whole thing, and I have no other choice but to feel that way,” Newton said. “I don’t want to ever put this team or myself in jeopardy that I’m just stressing to hurry up and get out there and I’m not able to be what makes me me.”
In their debut under Smith, the Bucs have been challenged on defense to outplay Carolina’s highly regarded unit. The Panthers led the league with 60 sacks and ranked second in total defense in 2013.
Under Smith, who coached the Bears from 2004-12, the Bucs have switched to a version of the Tampa-2 scheme they popularized during a decade of success under Tony Dungy and Jon Gruden.
With McCoy anchoring the defensive line, and linebacker Lavonte David making play after play, Smith feels he has the makings of another dominant unit.
“Potential is nothing, you can say anybody has potential. Everybody has got potential to do something,” McCoy said. “It’s about getting it done.”
Things to watch when the Panthers and Buccaneers open the season:
THE BIG UNKNOWN: Panthers linebacker Thomas Davis said the toughest part of preparing for the Bucs’ offense is not knowing what to expect. Tampa Bay has a new offensive coordinator in Jeff Tedford, a former coach at Cal who has never called plays at the NFL level.
BUT WHO’S CALLING PLAYS SUNDAY?: Tedford underwent an unspecified medical procedure last month, and the Bucs have not confirmed he will work Sunday’s game. In his absence, the rest of the offensive staff collaborated on the game plan. Quarterbacks coach Marcus Arroyo will relay play calls if Tedford is out.
NEW QB: Career backup Josh McCown will start a season opener for the first time since 2007. He’s coming off his best year as a pro, throwing for 13 touchdowns versus one interception while filling in for an injured Jay Cutler in Chicago. The Bucs are counting on him to help turn around an offense that ranked 30th in scoring and last in passing and total yardage in 2013.
STARTING SLOW: The Panthers have not won a season opener since 2008. Carolina opened at Tampa Bay two years ago, losing 16-10.
Carolina has opened the last three seasons 1-5, 1-6 and 1-3 under coach Ron Rivera.
DEFENSIVE SHOWDOWN: Don’t be surprised to see a defensive showdown. The Panthers ranked only behind Seattle on defense last season, and Smith boasted “we feel like we will be one of the best defenses in the league this year.” Smith and Rivera have strong defensive backgrounds, and the Panthers coach served as Bears defensive coordinator under Smith.
———
AP NFL website: www.pro32.ap.org and www.twitter.com/AP—NFL