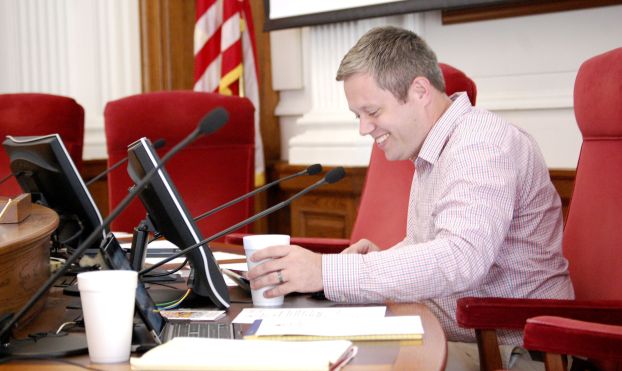 The rumors were true.
Not only was Chad Mitchell a candidate for the county manager’s job, but he nearly got it.
Commissioners were tight-lipped abut candidates at first, as the search was ongoing.
When the Rowan County commissioners went into one final executive session on Tuesday, the final two candidates remained in the second-floor Cohen Conference room, just feet away from each other.
Sitting in the front row of the audience was Michael Aaron Church. The only feature that set him apart from other audience members was his black suit. Other than his professional attire, it was unclear that he was Rowan County’s next manager.
More so than Church, Mitchell stood out like a smartphone in a dark room. While other commissioners exited the conference room, Mitchell remained. After being asked, Mitchell said he had applied for the position. He sat quietly and smiled awkwardly as I took pictures of him sitting among a half circle of empty seats.
Vice-Chairman Craig Pierce after Tuesday’s meeting explained that Mitchell had been a close second. At one point, the vote was tied.
Some may question the ethical issues surrounding Mitchell’s candidacy. In fact, many have.
Mitchell appears to have minimized most of those concerns, as he sat out of every executive session and didn’t participate in the hiring process. There are real concerns about relationships between commissioners. If they watch football games together, exchange Christmas cards and invite each other over for dinner, then perhaps the relationship is too friendly.
For his part, Pierce, who voted for Mitchell, said the relationship was strictly business.
It seems that Mitchell’s application was more like considering an internal candidate than nepotism.
Regardless, Mitchell, a school teacher at East Rowan High, leaves the board in December along with two other commissioners — Jon Barber and Jim Sides.
He also tried his hand at running for the state House of Representatives, but was unsuccessful.
Mitchell says he’s still passionate about public service, but wasn’t sure if another run for public office is in his future.
“I guess you could say public service is in my blood,” he said. “I’m always looking for an opportunity to serve.”
In 2016, when two more county commissioners’ terms end, perhaps we’ll see Mitchell’s name on the ballot again.
Rowan County’s voter registration seems to be changing ever so slightly.
In Sunday’s Salisbury Post, there will be a story analyzing changes in voter registration in recent months. It will also include long term trends in registration.
In analyzing the numbers, it seems that the La Resistance political group had some effect on the overall party breakdown.
In April, group members began changing political affiliation, partially targeted at removing Rowan County Board of Commissioners Chairman Jim Sides. Though they were apparently successful, board of election numbers show that the trend continued past the primary races.
There’s a noticeable difference between May primary registration and this week’s numbers.
In the general election, voters can choose candidates of any party they wish, but the difference may not be entirely about wanting to oust candidates, according to the Rowan County Board of Elections.