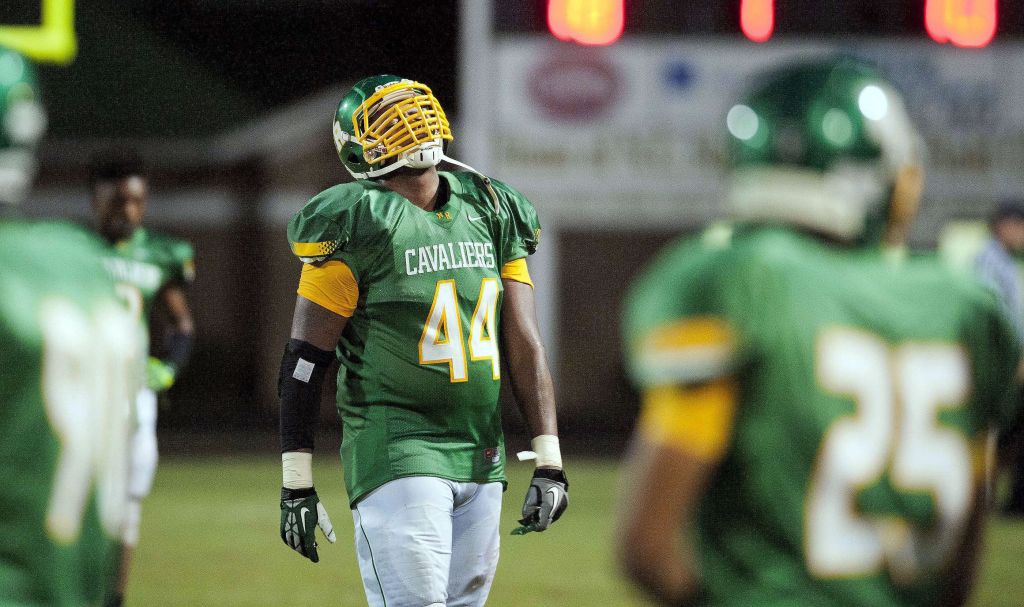 SPENCER — The defining play of Statesville’s 21-14 win at North Rowan on Friday was supposed to be made by one of the numerous offensive playmakers.
Instead, that memorable moment was supplied by a Statesviille defensive end named Devontae Bailey.
Trailing by a touchdown early in the second half, North Rowan (2-1) had first-and-goal at the Statesville 5. The Cavaliers put the ball in the hands of Jareke Chambers, who started left, spotted a host of Greyhounds in his path, and shifted into reverse, sprinting all the way back across the field, looking to circle his right end.
It’s the sort of head-shaking play that Chambers scores touchdowns on, but not this time. Bailey stayed home, and he was fast enough to collar Chambers and tough enough to bring him down for a critical loss back at the Statesville 10.
“Chambers is a hard runner and it was a hard game,” Bailey said. “We knew we had to contain him. I just did my job on that play. I was sitting there when he came back to my side and I made the tackle.”
Statesville’s defense held after Bailey’s play — and held and held and kept right on holding. Chambers actually squeezed into the end zone on a pass play from the 10, but an illegal block pushed the ball back to the 21. The Cavaliers didn’t get many chances after that.
“Statesville’s a good team, one of the top-ranked teams in 3A,” North Rowan coach Joe Nixon said. “They were really fast on defense and they also were a lot more physical then I gave them credit for.”
While it was as hard-hitting and athletic as expected, the game didn’t light up the scoreboard as anticipated. Statesville had scored 70 in its first outing. North Rowan had put up 43 and 42 in two games.
A scoreless second half was the last thing anyone would’ve bet on, but it happened.
“Both defenses really stood up and played well,” Statesville coach Randall Gusler said.
Statesville held Chambers to 78 yards on 18 carries and limited North Rowan, which lost key receiver Shareef Walker early in the contest, to 85 passing yards.
The Cavaliers, who got two sacks from Jake Pritchard, bottled up Statesville’s running game. Although electrifying quarterback Travis Ramseur threw for 265 yards, 214 in the first half.
It was all North Rowan at the outset. Quarterback Alexis Archie bulled 11 yards to cap a 69-yard scoring drive on the Cavaliers’ first possession.
After Paris Hillie recovered a fumble on the ensuing kickoff, Archie quickly fired a strike down the middle to rangy receiver Sakil Harrison for a 14-0 lead.
“North Rowan’s first quarter was great,” Gusler said.
North Rowan’s defense had stopped Statesville for the third straight time to begin the game, but with the Greyhounds punting on fourth-and-17, the Cavaliers had a roughing-the-kicker penalty. That’s where the game turned around.
“Just a kid being aggressive and trying to make a play,” Nixon said. “But we’ve gotta be smarter.”
Given a reprieve Statesville promptly scored, and Ramseur took over the second quarter. He threw two touchdown passes, the second one 30 seconds before halftime, and the Greyhounds led 21-14 at the break.
“We were OK,” Nixon said. “We knew we’d score some points in the second half, but we had bad mistakes that cost us possesions.”
Trae Clark had an interception for the Cavaliers, but North Rowan’s list of sins was too much to overcome. The Cavs gave away three possesions on a muffed punt, a fumble and an interception.
“We never gave up and I believe we fought as hard as we could have,” Harrison said. “But when you make as many mistakes as we did, it’s hard to fight back.”