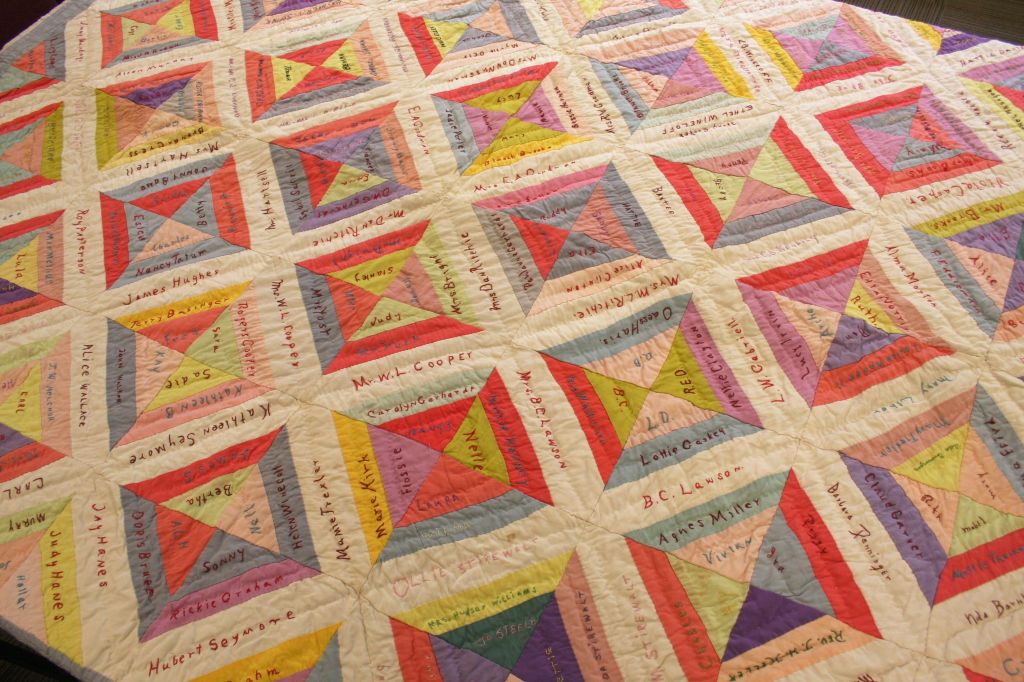 Carol Hair loves to work puzzles. It’s a good thing. Karen Goodman loves to be helpful. It’s a good thing.
For the past several weeks, the women have been working to solve a mystery. And they need your help.
In mid-August, the phone rang at St. John’s Lutheran Church. Karen, the church’s administrative assistant, found herself talking with Sue McKinlay, a volunteer with God’s Goods Thrift Store in Bluffton, S.C., near Hilton Head. It seems Sue had a quilt and she thought we’d be interested in it. The quilt had names hand-stitched on each square, and one of those names was Addie Ketner, who at 103˝, is St. John’s oldest member.
Would we be interested in taking the quilt, and finding out more about it? Sue asked Karen.
Karen’s answer was yes.
“When she mentioned Addie Ketner, I knew we needed to find out where it came from and who it belongs to,” Karen says.
At first, Karen thought Sue wanted to sell her the quilt, but Sue only asked the church to pay shipping costs.
That’s where Carol comes in. Carol leads St. John’s Chrismon ministry, and those ladies agreed we wanted that quilt. The Chrismon ladies agreed to pay the shipping, and the quilt arrived the next day.
“That’s when I got to be the lead investigator,” Carol says. “Everyone came in to look at it. They were all fascinated by it.”
When I took a look, I immediately noticed names from my home congregation, St. Mark’s Lutheran in China Grove. There were other familiar China Grove names as well. Most of them are no longer with us, however.
That information took Carol’s search to the southern part of the county. Carol traveled to China Grove on two occasions, where she showed the quilt to Barbara Doby, Norma Burgess, Dale and Gayle Keiger, Carole Brooke, Jim and Shirley Morton, Eloise Teeter and Sharon Basinger.
Carol discovered that Eloise had a “sister quilt” to the mystery quilt, a quilt she received as a wedding gift in 1950. The patterns were different but the material used was identical.
“The quilt looks like it’s made from scraps of that quilt,” Carol says.
Through Carol’s research, she suspects that the quilt was made as some type of community fundraiser, with folks paying 25 or 50 cents or a dollar to have their names sewn onto it. Most of the people we have talked with concur.
“I think everybody in China Grove supports each other,” Carol says. “They have a community family, just like our congregational family.”
That was certainly true in 1950, and it’s true today.
Take for example, the China Grove Roller Mill. Through the efforts of the community, it’s been restored and still serves as a community hub of sorts. The mill is open the second Sunday of each month, from 2 to 4 p.m. This Sunday, Sept. 14, the mill will be open, and our mystery quilt will be on display. Carol and Karen and I hope that you will come and take a look, and help us solve a mystery that’s now 64 years old — we think.
Carol got involved, she says, “because I like puzzles! It’s a mystery! Sue cared enough to get it to us. I don’t want to drop what she put into it. I want to see it through. The people who made this quilt cared. Their care has radiated for 60 years. We don’t know if it paid for someone’s education, or if it helped with a disaster. But we sure would like to know.”
As for Karen, helping out is just part of her job, she says.
“We never know what people are going to need when they call us,” she says. “We’re like the Lutheran Chick-Fil-A. It’s always a pleasure to serve.”
The China Grove Roller Mill is located at 306 N. Main St. in downtown China Grove. For more information, call 704-433-3912.
Freelance writer Susan Shinn lives in Salisbury.