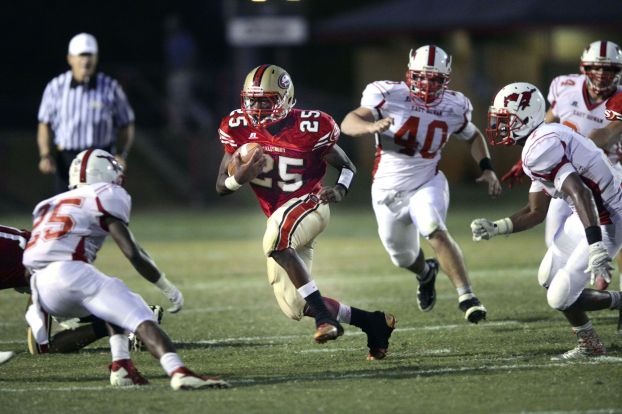 On paper, it’s the quietest Friday of the local prep football season, with Carson, South Rowan and East Rowan taking a night off.
While South Rowan can use the time to work on special teams and Carson can use the time to tweak its defense, East Rowan probably isn’t thrilled with the bye week. The Mustangs built momentum with their 54-point offensive show against Salisbury.
Even with half of Rowan County idle, there will be some lightning in Spencer where North Rowan takes on Statesville in a battle of ranked teams and some thunder in Mount Ulla where West Rowan and Salisbury renew an old rivalry for the 35th time.
Salisbury (0-2) at West Rowan (1-1)
West Rowan’s Scott Young has put up some numbing numbers during a 17-year head-coaching career that has included 165 wins and 50 losses. One of those numbers is his perfect record against Salisbury. He’s 12-0 against the Hornets, including the first win of his career on opening night in 1998.
All told, the Hornets have lost 13 straight times to the Falcons and haven’t beaten West Rowan since 1996.
West Rowan won 55-0 at Ludwig Stadium in 2013. West Rowan’s domination isn’t likely to end Friday, given that Salisbury’s defense allowed 400-plus rushing yards to Carson. The Falcons are going to come straight at the Hornets on the ground with county rushing leader Harrison Baucom.
Last week’s 48-36 road win at Davie was a confidence booster for the Falcons, who have a chance to be good.
Despite getting blasted by the Hornets in the 1970s, West Rowan now leads the series 20-14.
Statesville (1-0) at North Rowan (2-0)
When the Greyhounds and Cavaliers squared off in Statesville last season for the first time since 1966, it was worth the wait.
Playing without injured quarterback Alexis Archie, North Rowan put the game in the hands of tailback/backup quarterback Jareke Chambers. He got it done. Chambers’ scoring run with 7.3 seconds left provided a 39-33 victory.
That was a major breakthrough for the Cavaliers, one that lifted them in the 2A polls and propelled them to a 13-1 season and a third-round playoff appearance.
North Rowan entered this season regarded as a top-5 team in 2A and has done nothing to damage that perception. North Rowan’s defensive numbers aren’t that pretty, but most of the stats accumulated by East Rowan and Carson in losses to the Cavaliers came after the games were decided.
North Rowan’s nice offensive numbers aren’t misleading. Archie topped 300 passing yards last week. Sakil Harrison and Shareef Walker topped 100 receiving yards. Chambers and Andra Cowan surpassed 100 rushing yards. The Cavaliers have many weapons that come at you from a lot of directions.
Statesville has a fantastic quarterback in Travis Ramseur, probably the most athletic player North Rowan will face all season, and the Greyhounds destroyed Hickory 70-19 in their only outing. Statesville was off last week, so it’s had extra time to prepare.
Statesville leads the series 2-1-1.
A.L. Brown (1-1) at Weddington (2-0)
Weddington has beaten Ardrey Kell on the road and Forest Hills at home.
The Wonders prevailed 7-0 in the inaugural meeting of these schools last season, shutting down a high-powered passing attack in what was regarded as a mild upset.
Defensively, the Wonders have been better than advertised and lead the area stats.
Davie County (1-1) at Lexington (0-2)
Davie romped 53-10 against Lexington a year ago for Devore Holman’s first head-coaching win.
Davie is expected to cruise Friday even with standout back Cade Carney (knee) sidelined.
Quarterback Parker Correll threw two scoring passes against Lexington last year and already has 573 passing yards and five touchdowns this season.
Lexington still leads the series 9-4, but Davie has won the last three.
Follow Mike London on Twitter at @mikelondonpost3.