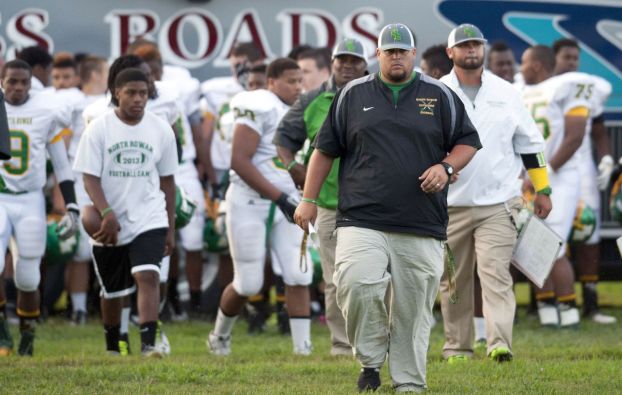 SPENCER—The showdown between Statesville and North Rowan last year was exactly that. The game was as down to the wire as it could be with an ending as exciting as any game last year.
The Cavaliers and Greyhounds were tied 33-33 as precious minutes ticked off the clock. Statesville drove down the field and had a win in its grasp.
“We were like, ‘Man we got to do something fast, right now, ASAP. Or we might lose this game,’” North Rowan’s Jareke Chambers said.
Then Tyree Ward, in at running back for the Greyhounds, carried the ball to the right side of the field. North Rowan linebacker Jake Pritchard forced a fumble on the play, and Kenyon Tatum recovered the loose ball for the Cavaliers.
“We were down by seven points at that point, and they had made a drive down the field,” Pritchard said. “They were on our goalline, and we stopped them right there, forced a fumble.”
Chambers scored the game-winning touchdown five plays later.
“We were just moving the ball downfield, and with 10 seconds left I dropped back and saw a hole,’ Chambers said. “I just took off. That was the game right there.”
North Rowan 39, Statesville 33.
Before that night, North Rowan had two wins. Those wins, however, came against teams it was expected to beat. Statesville had a wealth of talent on the offensive side of the ball. It was also coming off of a bye and a tough-opening week loss at Hickory.
That six-point victory at Statesville on Sept. 6, 2013, propelled the Cavaliers to one of the greatest seasons in school history. It was the third leg of a 13-game winning streak that opened the season. Those 13 wins are the school record for victories in a season. The Cavaliers rolled through the Central Carolinas Conference and advanced to the third round of the state 2A playoffs.
“It was a big stepping stone for our program,” North Rowan head coach Joe Nixon said. “Our guys are pretty even keel. We take it one game at a time like everybody says they do, but obviously it was a huge game for us. It built us some momentum. We faced some adversity in that game, and that was good to see.”
Chambers, who was playing quarterback that night for injured Alexis Archie, was virtually unstoppable. He was 11 for 16 — without an incompletion in the second half — for 155 yards and a touchdown. He also ran the ball 28 times for 198 yards and three touchdowns.
“He made some throws when we needed him to make throws,” Nixon said. “He did good with his legs obviously. That’s what Jareke does best. He found a way for us to win the game at the end of the game.”
Meanwhile, Statesville got snake-bit by bad luck and the inability to close out wins after that loss. The Greyhounds opened the season 1-5 with four of those defeats coming after holding fourth-quarter leads.
This year’s meeting between the Cavaliers and Greyhounds could top last year’s meeting.
Like 2013, North Rowan is unbeaten after wins over East Rowan and Carson. Chambers was injured early in the opener against the Mustangs, but he was back in form against the Cougars last week. He’s averaging 72.5 yards per game and became the owner of the North Rowan career rushing record last week.
Archie and Sakil Harrison are coming off big games against Carson. Archie threw for 328 yards and four touchdowns. Harrison caught nine passes for 142 yards and three touchdowns.
The Cavaliers’ defense is allowing only 255 yards per game.
Statesville is rolling as well. The Greyhounds beat Hickory 70-19 in the first game of the season. Travis Ramseur threw for 191 yards on 8-of-12 passing, and he ran for another 101 on just eight carries. Ramseur, a junior, was responsible for three total touchdowns.
“It’s going to be a big-time game,” Nixon said. “There’ll be a lot of speed on the field, a lot of very good football players and two well-coached teams. …It’ll be a good game.”
Follow Adam Houston on Twitter at @AdamRHouston.