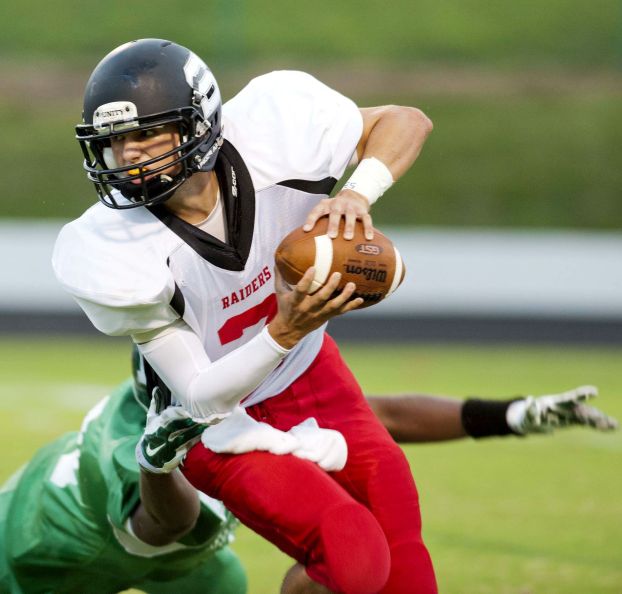 East Rowan quarterback Samuel Wyrick enjoyed a history-making outing in Friday’s 54-28 win against Salisbury.
Wyrick became the first East Rowan player to throw five touchdown passes in a single game, and it was only the sixth time that’s happened in county history.
Wyrick threw two touchdown passes to his brother Seth Wyrick after throwing two to Tre Gillespie. The school-record-breaking and county-record-tying fifth scoring pass went to Naquis Caldwell early in the fourth quarter.
A three-year starter, Wyrick has 43 career touchdown passes for the Mustangs. The school record of 50 was established by C.M. Yates and has stood since 1970.
Wyrick threw for 241 yards Friday, a career best. His previous high was 230 yards against Hickory Ridge in 2013.
Wyrick has thrown for 3,623 yards in his career and is closing on another school record that Yates has held for 44 years. Yates passed for 3,910 yards in three seasons.
•

SETH WYRICK UPDATE: Seth Wyrick had four catches for 151 yards against the Hornets, the seventh time he’s topped 100 receiving yards.
Wyrick has 95 career catches. That’s good for 11th in county history. The school record of 136 has been held by Johnny Yarbrough since 1970.
•

RECORD: East Rowan’s 54 points against Salisbury were the most the Mustangs have ever scored against the Hornets. This was the 41st meeting.
Kenneth McClamrock, the 19th head coach in East Rowan history, became the 18th to register a win.
•

STREAK: East Rowan has won three straight against Salisbury since the Hornets wiped out the Mustangs 51-0 in 2011. The Mustangs won four in a row against Salisbury from 1990-93.
Salisbury’s offense is off to a much stronger start than last season. Cameron Horne, Antwond Glenn and Will Steinman have put touchdowns on the scoreboard in both games.
Yet, even though they’ve scored 63 points, the Hornets are 0-2. They’ve given up 96 points, including 47 in the first half of the loss to East Rowan.
•

RALLIES: Salisbury has been a second-half team to the extreme. The Hornets have been outscored 75-7 in the first half, but they’ve outscored opponents 56-21 after halftime.
Special teams have been huge in West Rowan’s wins against Davie in recent seasons, and Friday’s 48-36 victory was no exception.
The Falcons led 34-7 at halftime, but they went three-and-out to start the second half on offense, and Davie scored immediately on a long pass play from Parker Correll to Ben Ellis.
Davie was building momentum, but then Juwan Houston ran back Davie’s kickoff 95 yards for a backbreaker.
“That took a lot out of Davie,” West Rowan coach Scott Young said.
•

SHOUTOUTS: Young said the Falcons’ defense, led by nose guard Justin Evans and linebacker Dearius Phillips, was “lights out” in the first half against Davie.
Jacob Radtke led a West Rowan offensive line that punched enough holes for 293 rushing yards.
“We played with a lot of heart and emotion,” tailback Harrison Baucom said.
•

NEEDED IT: Young said he couldn’t remember many worse weeks for his program — until Friday’s victory made the Falcons 1-1.
“We got handled by Mooresville in the trenches like no one has handled us in a decade,” Young said. “Then (former West Rowan assistant) Darrell Misenheimer’s death hit us hard. Then we get down 7-0 in the first minute at Davie. But I liked how our kids responded. I’m very proud of them right now.”
•

STREAK: West Rowan has beaten Davie six straight times, the Falcons’ most dominant stretch in the long-running series. Davie still leads 26-16-2 because it went 10-0-1 against the Falcons from 1970-80.
Friday’s game was one of the highest-scoring in series history with 84 points. The teams also scored 84 in 2006 when Davie beat the Falcons 47-37.
Standout running back Cade Carney was injured late in the third quarter in the loss to West Rowan.
Reports are that he has a sprain of a medial collateral ligament on the inside of the knee.
Carney won’t play Friday against Lexington, but he could be back in a few weeks.
The Raiders got relatively good news on the injury to quarterback Aaron Kennerly that occurred in Friday’s 51-7 loss at A.L. Brown.
Kennerly has a shoulder injury — a bone bruise and a sprain of the AC joint. While Kennerly probably will be out until early October, that’s not the worst case. It was feared he’d re-broken his collarbone, an injury that ended his junior season.
Kennerly said his goal is to return for the game at Cox Mill on Oct. 3.
“That kid is a good player and he was putting South in a lot of good positions before he got hurt,” A.L. Brown coach Mike Newsome said. “I hope they have him for their league games because they can do some good things.”
The Raiders are idle Friday. That will give backup quarterback Heath Barringer plenty of reps before South Rowan returns to action on Sept. 12 against Northwest Cabarrus.
•
PUNT TEAM: South Rowan will spend much of its off week working on punting issues.
“Punts costs us 28 points against Kannapolis,” South Rowan coach Jason Rollins said. “It’s something we’ve got to fix.”
•

DEFENSE: The scoreboard on Friday was misleading as far as South Rowan’s defensive effort, especially in the first half.
The Raiders missed injured Tyler Karriker, but Alex Parham had two sacks and another tackle for loss. Joey Stanback had two tackles for loss. Weston Tucker had a tackle for loss, while Grex Urey teamed with Parham for a sack.
•

STOWE-AWAY: Eric Stowe, South Rowan’s leading returning receiver, has been out with a knee injury, but he hopes to be back for the Northwest Cabarrus game.
In two games, versatile Casey Walker has 102 rushing yards and 134 receiving yards and has put the ball in the end zone four times.
A.L. Brown led South Rowan only 14-7 late in the first half, but it turned into a game that employed the NCHSAA’s automatic mercy-rule — a running clock in the second half if a team goes up by 42 or more points.
After the Wonders pushed ahead 51-7, the mercy rule took effect, and the last nine minutes went by in a hurry.
•

REMATCH: The Wonders take on Weddington on Friday.
That’s a team the Wonders beat 7-0 with their best defensive effort of the season in 2013.
Alexis Archie threw for 328 yards in North Rowan’s 42-28 win against Carson on Friday, the second-best yardage game of his career. He passed for four touchdowns in a game for the third time.
Archie now owns two of the 10 biggest passing games in county history. He threw for 361 yards last season against West Davidson.
He has 3,150 career passing yards and is the 20th player in Rowan County history to surpass 3,000 yards. He ranks 18th in county history and ninth in school history.
Archie has thrown 34 touchdown passes in two-plus years as a starter.
•

JAREKE UPDATE: Jareke Chambers rushed 15 times for 122 yards against Carson and became North Rowan’s leader in career rushing yardage. Chambers has a unique career rushing line — 3,333 yards — although he’s been anything but 3 yards and a cloud of dust.
Chambers is 10th in Rowan County history and could surpass Salisbury’s Romar Morris and Thomas Lowe, who played at East Rowan and South Rowan, as early as Friday.
Mark Sturgis, who in 1976 set the North Rowan rushing mark that Chambers finally broke, is this week’s Friday Night Legend.
•
SAKIL THRILLS: Sakil Harrison had two touchdown catches Friday. For his career, he has 76 catches for 1,328 yards and 13 touchdowns.
Brandon Sloop had 15 carries for 93 yards in the loss to North Rowan.
A four-year starter, Sloop has 3,767 career rushing yards. He’s second to Shaun Warren in school history and fifth in county history behind West Rowan’s K.P. Parks, Warren, Dinkin Miller and Wade Moore.
•

KING LEAR: Carson had to go to the air more than usual to move the ball against North Rowan, and quarterback Andy Lear responded with touchdown passes to Darren Isom and Brandon Huneycutt. Huneycutt had the biggest game of his career with six catches for 111 yards.
•

MULTIPLE THREAT: A returning all-county player, Isom had a rushing touchdown, a receiving touchdown and a pass interception.