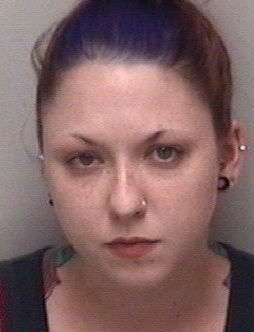 A former salon stylist was charged with methamphetamine, pills and marijuana possession after the owner caught her with drugs.
Salisbury Police charged Kristina Melissa Keating, 25, of the 200 block of West 22nd Street, Kannapolis, with possession of meth, simple possession of marijuana, possession of oxycodone and suboxone, which can be used to treat opiate addiction, and possession of drug paraphernalia.
Police were called to Cut Up & Dye Salon at South Fulton Street in reference to a narcotics complaint.
The business owner, Leila Faries, said Keating wasn’t acting like herself. Faries found the drugs and called law enforcement.
“I do not condone drugs,” Faries told a Post reporter.
She said Keating had been working at the salon for about two years, but was terminated.
A police report said there was an employee who showed up to work under the influence of drugs. The pills were found inside a bottle in Keating’s purse, a report said.
Police found three doses of meth, three oxycodone pills and two suboxone pills. A police dog searched Keating’s car and alerted, the report said.
Officers seized 4.4 grams of marijuana, rolling papers and a glass smoking pipe in the car.
Contact reporter Shavonne Potts at 704-797-4253.