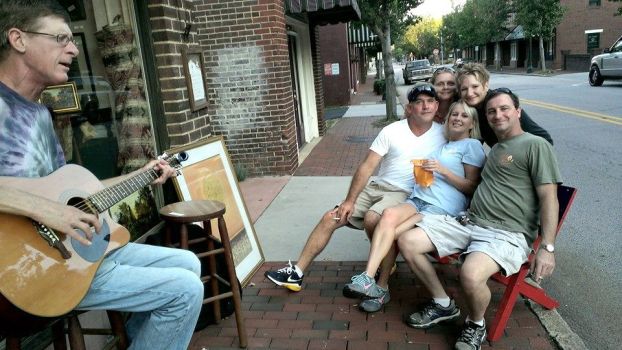 Downtown Salisbury will host its second annual Best Busker’s Bash Contest on Friday from 5 until 9 p.m. in conjunction with its monthly First Friday event series. Shops and restaurants will be open late offering Busker’s Bash specials while almost 40 street performers located throughout the downtown will compete to win this annual contest. Busking is the practice of performing in public places, for gratuities, in this case for top prizes.

Busker’s Bash attendees will be able to vote for their favorite performers by grabbing a “voting guitar picks packet” at the registration tent in front of Southern Spirit Gallery (102 S. Main). Each packet will contain a handful of guitar picks along with a map for this entertainment tour throughout downtown. Performers will each have a VOTE FOR ME poster and bright orange bucket which will collect their hopefully winning votes.
As part of the First Friday Shop – Dine – Stroll event downtown, shops will be open from 5 until 9 p.m. with street performances from 6 to 8 p.m., after which the votes will be collected and first, second and third place winners will be announced at a Grand Finale at Uncle Buck’s All American Pub & Grub (127 S. Main) at 9 p.m., followed by a live jam session with many of the street performing musicians.

Prizes this year include Downtown Dollars from Downtown Salisbury Inc. and gift certificates from Guitars USA and Griffin Guitars. This annual event is scaled to be a growing major attraction for visitors to Downtown Salisbury. Come down to the square at Main and Innes Streets for a night of free music, magic and more on the streets from great local performers, plus deals from neighborhood merchants on food, drinks, goods, and services on Friday.
Contact Downtown Salisbury at
704-637-7814 for more information.

Join Pottery 101 for a pretty and playful collaboration of ceramic artists Jerissa Clifton and Ashley Pierce. The reception is... read more