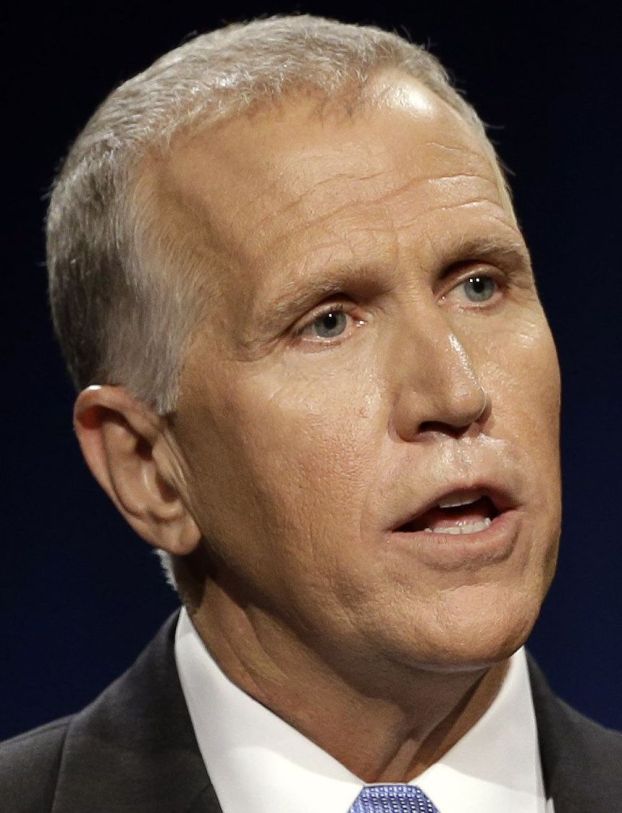 RESEARCH TRIANGLE PARK (AP) — Sen. Kay Hagan accused Republican challenger Thom Tillis of shortchanging education as a leader of the North Carolina legislature on Wednesday night, and he cast her as a rubberstamp for President Barack Obama in the first debate of a close and costly race with national stakes.
The hourlong confrontation marked the first major post-Labor Day event of a national struggle between the political parties for Senate control. Republicans must gain six states to win the Senate majority and have long listed North Carolina as a top target.
Hagan and Tillis stood 10 feet apart at identical podiums as they exchanged accusations central to a race that public opinion polls rate a toss-up.
Tillis recalled Hagan’s comments from her successful 2008 campaign, when she criticized GOP incumbent Elizabeth Dole for having voted 92 percent of the time with then-President George W. Bush. And yet, he said, Hagan has sided with Obama 95 percent. “Kay 1.0, Kay 2.0,” he said unflatteringly, adding, “At the end of the day we need to say what we mean.”
Hagan said repeatedly she had been named the most moderate member of the Senate, and cited examples of legislation she had passed with the help of Republican senators.
“I have stood up to the president and my party when it’s right for North Carolina,” she said, noting she supports building the Keystone XL pipeline and has opposed trade deals sought by the administration.
Hagan, 61, sought to turn Tillis’ own words back on him. She quoted him as saying at a state Republican convention in 2011 that members of the state teachers’ association don’t care about children or classrooms — only about jobs and pensions.
“Folks, those are his words, not mine,” Hagan told the TV audience when accusing Tillis of cutting education by $500 million and giving tax breaks to wealthy individuals while leading the North Carolina House. “And his priorities even speak louder than his words.”
Tillis, 54, countered by highlighting the average 7 percent pay increase for teachers approved by the General Assembly this year, one of the largest in years. He also said that Hagan, while a budget-writer in the state Senate during the last decade, allowed a temporary sales tax increase to become permanent.
The Republican challenger repeatedly recalled Hagan’s vote for the president’s health care law, saying it had led to the cancellation of hundreds of thousands of policies held by North Carolinians. Tillis said the law will not fulfill the promise she made.
Hagan responded that she is working to fix the law, and said Tillis’ call for its repeal would return consumers to an era of less protection and higher cost. She also said insurance companies weren’t upfront with consumers about the upcoming cancellation of their policies.
She accused Tillis of refusing while speaker to support expanding Medicaid for 500,000 state residents. The program provides health care for the low-income, and under the health care law, the entire cost of any expansion is picked up by the federal government for the first few years.
On international issues, both Hagan and Tillis said they were open to taking military action against Islamic State militants after a second American journalist was beheaded in two weeks.
“I want to see the president’s plan, and I am ready to take action,” Hagan said. But Tillis blamed Obama for not having a coherent strategy and Hagan for allowing his inaction.
The two rivals also disagreed on immigration, although both said Obama should not act unilaterally to allow immigrants to remain in the country legally if they arrived here unlawfully.
Hagan defended her vote for legislation that cleared the Senate in 2013, noting it provided for beefed-up security at the border with Mexico and enjoyed the backing of several conservative Republicans.
In a jab at Obama’s statement that he might act on his own, Tillis said the president considers the three branches of the government to be “the executive branch, his pen and his phone.”
“Granting amnesty would be a colossal mistake,” he said.
Both candidates seemed to be reaching out to female voters in response to a question from CBS anchor Norah O’Donnell about a U.S. Supreme Court decision allowing closely held companies to refuse to offer contraceptive coverage to employees on religious objections.
Hagan opposed the ruling and said Tillis’ support for the decision shows that he “just doesn’t understand the needs of women.” TiIlis, who won the endorsement of the group National Right to Life before the May primary, said efforts should be made to make contraception more widely available over the counter to increase access. Dozens of abortion rights and anti-abortion advocates rallied near the debate site Wednesday night.
Hagan, Tillis and their allies have already spent about $29 million on the race, according to the Center for Responsive Politics, making it one of the most expensive in the country.
The next debate is set for Oct. 7. A third debate has been agreed to but details haven’t been finalized.
——
Associated Press writer Jonathan Drew contributed to this report.