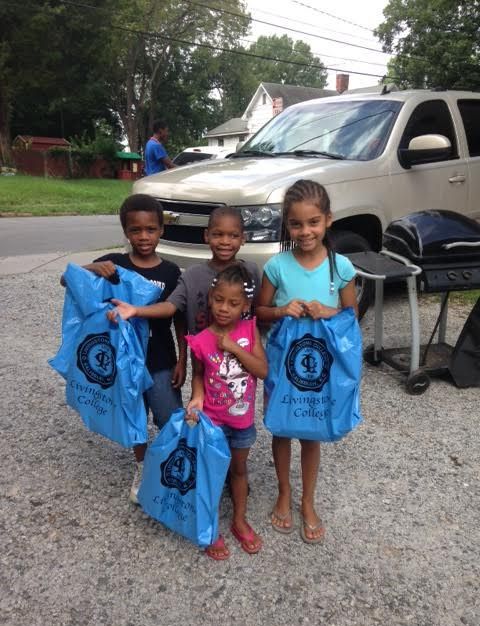 The fall semester began at Livingstone College on Aug. 20, but Samiydah Dy’Meen Kearney began working long before that.
That’s because before the academic year began, Kearney collected pencils, notepads and other supplies — and services — for Salisbury school children. She did it under the student organization Women with Curls, which she founded a year ago.
Kearney said she wanted to provide school supplies for area children because she knows what it’s like to go without. Her mother, Sarita Faison, was a single parent who raised her and three other children without help.
“My mom would spend her last dollar on school paper and other items for us,” Kearney said. “Sometimes she had to use part of our rent money so we would have things for school, and there were several years when I didn’t have a new hairdo for the start of school or my brother couldn’t get a haircut, but our mom did her best.”
Kearney is the second of four children and grew up near Raleigh.
“Even though our dad wasn’t around and we had it rough as children, my mother encouraged me to try to get as far as I could in terms of my education,” said Kearney, who’s majoring in biology and minoring in chemistry and business administration. “My mother was very encouraging, and I feel like I should go out in the community and talk to kids who face the same challenges that I did coming up. I feel where there’s a will, there’s a way.”
On Aug. 19, about 60 children stopped by B&B Barbershop on Horah Street in the West End, where Kearney had arranged for free haircuts for boys and free hairstyles for girls. That’s also the location where the children were fed hot dogs, potato chips, chicken and other delights, and where they were given their bags filled with school supplies. The college’s food service company provided the hot dogs and buns, and Harris Teeter donated the drinks and chips.
The event was fun, and the children were all smiles as they looked in their bags and discovered what was inside.
“The kids were excited. They were dancing and we were playing music and eating,” Kearney said. “They had a good time. In addition to their individual bags, I had items in very large baskets and gave students an opportunity to choose five things out of those baskets.”
To spread the word about the Back-to-School Giveaway, Kearney created flyers and distributed them at Halls Gym, the J.F. Hurley Family YMCA and in several Salisbury neighborhoods. She didn’t disseminate flyers on campus because the students hadn’t yet returned for the fall semester when she was collecting supplies, but she did have an email sent to faculty and staff to solicit their help.
“I’m very appreciative of the faculty and staff members who used their personal money to buy supplies for the school children, particularly given the fact that the economy is still in a downturn,” Kearney said. “I was really surprised at the amount of supplies donated, and I know the kids who received them, and their parents, were grateful.”
Livingstone employees also contributed to a few other Back-to-School events, including one that was sponsored by The Village and provided free food, activities and school supplies for children living in Salisbury’s West End community, and another sponsored by First Legacy Community Credit Union. First Legacy officials partnered with area businesses to provide school supplies, clothes and free haircuts and hairdos for children.
For her Aug. 19 event, Kearney said Livingstone employees Stephanie Jones and Tanya Turner were very instrumental. Jones, director of the college’s Success Center, donated several notebooks and binders, while Turner, an administrative assistant in the president’s office, provided school supplies and sage advice.
“Mrs. Turner helped prepare the bags for the kids by stuffing the items in them,” Kearney said. “She also critiqued me, and I honestly appreciate that because it’ll make me perform better when I organize other projects in the future. She made a personal donation, she coached me on the proper way to approach individuals when asking for donations, she talked to me about patience and she also shared inspirational words with me. She was very helpful, and she was always there and available whenever I called her. I never got her voice mail once when I called.”
Kearney said she’s pleased with the event, the first one sponsored by Women with Curls this semester. She’s also grateful to serve as a role model to her younger brother, Gregory Yarborough, 18, and her younger sister, Samar Faison, 11.
“I hope that because I’m in college, my younger siblings will want to follow in my footsteps and go to college as well,” Kearney said. “My ultimate goal is to become an orthodontist, but just as important to me as reaching that goal is knowing I’m inspiring my brother and sister to further their education and knowing I’m making my mother proud. She’s happy I’m in college and doing well, and she’s certainly pleased with me for giving back to the community the way I’ve done.”
Livingstone College President Dr. Jimmy R. Jenkins, Sr., is also pleased with Kearney’s efforts, which fit naturally into one of the institution’s 10 Holistic College modules: political action and social responsibility.
“It makes me proud to know our students understand the importance of giving back and being of service to others,” Jenkins said. “By collecting supplies for kids, Ms. Kearney gave of her time but more importantly helped area school children get the year off to a good start. I’m very proud of her.”