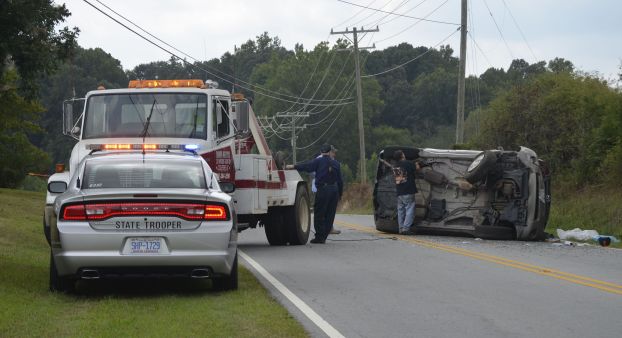 The driver of a single-vehicle crash in the 7200 block of N.C. 801 walked away Thursday morning with minor injuries after her sport utility vehicle overturned.
The driver’s name was not immediately available and she declined an interview with a Post reporter at the scene.
Troopers say they don’t know if speed or alcohol were factors in the crash and continue to investigate. The driver told a trooper she was driving and “maybe the heat got to her,” because within the next moment she was upside down in her vehicle and “someone” was talking to her asking if she was all right.
In addition to N.C. Highway Patrol, Cleveland Fire Department also responded. The woman did receive cuts and scrapes to her left arm, which was bandaged at the scene.
She was the only person in the vehicle. A tow service was able to right the vehicle and load it onto a wrecker.
The fire department had to detour traffic around the accident, but eventually opened one lane allowing cars to pass through.
See Friday’s Post for more details.