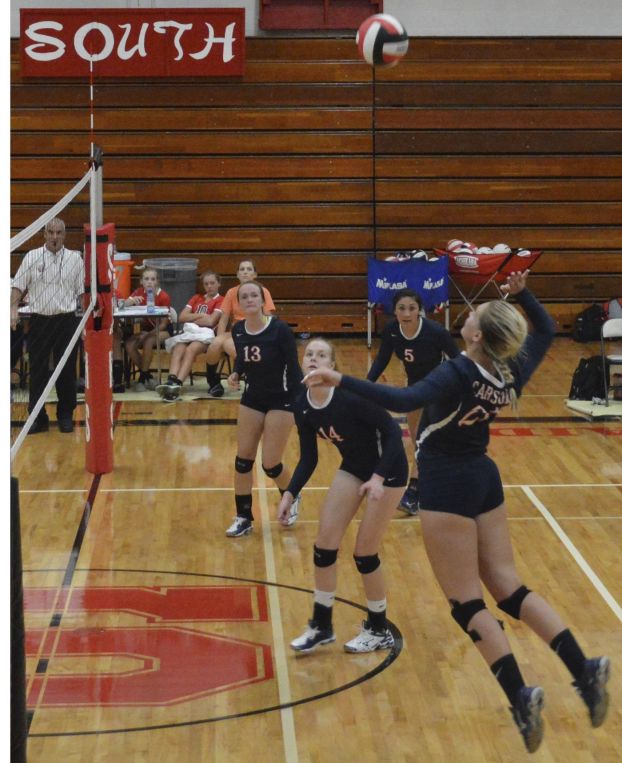 LANDIS — Asked about the difference between the 2014 Carson Cougars and the Cougars who went 65-5 and played in the last two 3A volleyball state championship games, Jordan Osborne had a quick answer.
“Shorter,” Osborne said. “We’re a lot shorter.”
Definitely smaller but still not bad. Without 6-foot college signees Michaela White and Hannah Elmore hammering balls through the floor and Madison Weast skying to block everything in the middle, the Cougars aren’t imposing, but they’re still winning.
Maybe Carson didn’t scare anyone Tuesday, but it exited the South Rowan gym with a 25-19, 23-25, 25-14, 25-18 South Piedmont Conference victory.
“Yes, it’s different and we’re different,” Carson coach Kelan Rogers said. “I kind of liked it when it wasn’t this exciting. We made a ton of mistakes today, but not as many as we have been making.”
The Cougar who did most of the growling and hissing Tuesday was Osborne. A role player last season, Osborne is now a vital hitter. She pounded 17 kills, with 12 coming in the last two sets as the Cougars answered a challenge from South Rowan.
“I kinda kicked it in a little bit,” Osborne said. “I started slow and I was telling myself, ‘Jordan, you’ve gotta turn it on.’”
Sophomore Morgan Hester, Carson’s only returning starter, carried the Cougars (5-1, 3-1) to their victory in the first set.
But in the second set the Raiders (3-4, 2-3) took command on two aces by Abbi Fields, who had a sensational day, then closed things out with back-to-back aces by returning all-county player Kylie Labbe.
“I felt like we had them right there,” Labbe said. “But as quick as we got up, we went back down. We stopped competing and communicating as one.”
Carson broke open the pivotal third set with seven straight points
“We told a joke between sets, laughed a little bit and started having fun again,” Hester said. “We play our best when we’re having fun.”
Part of that run could be attributed to Kaytee Leonguerrero. Rogers said that Leonguerrero missed the first four games of the season with an injury and her return means Carson’s offensive attack isn’t as predictable with her ability as an attacker and second setter.
“I still think the strong point of this team is defense,” Osborne said. “But when you add Kaytee that opens up a lot of offense for us.”
Carson jumped ahead 4-0 on Hester’s serve in the final set. With Carson hanging on 19-16 and the Raiders charging, Leonguerrero set up Hester for a momentum-stopping kill. At 22-18, Hester set up Osborne for a smash to end South Rowan’s last comeback bid.
South Rowan coach Jan Dowling was disappointed.
“We had a better effort in Monday’s practice than in today’s game,” she said.
South Rowan got six kills from Labbe and Beth Ann Martin. Avery Locklear, Caroline Hubbard and Dakotah Lambert had five each.
Carson’s Elena Turnbull contributed 11 kills. Hester had 10. Lindsay Elmore had seven kills and several blocks.
“We’ve got one starter back and three girls who played,” Rogers said. “But I hope we’ll do some growing as a team. The team we are now is not as the good as the team we’re going to be.”
Follow Mike London on Twitter at @mikleondonpost3.

North Rowan basketball coaches Andrew Mitchell and Brian Lytton are the club sponsors for the Fellowship of Christian Athletes at... read more