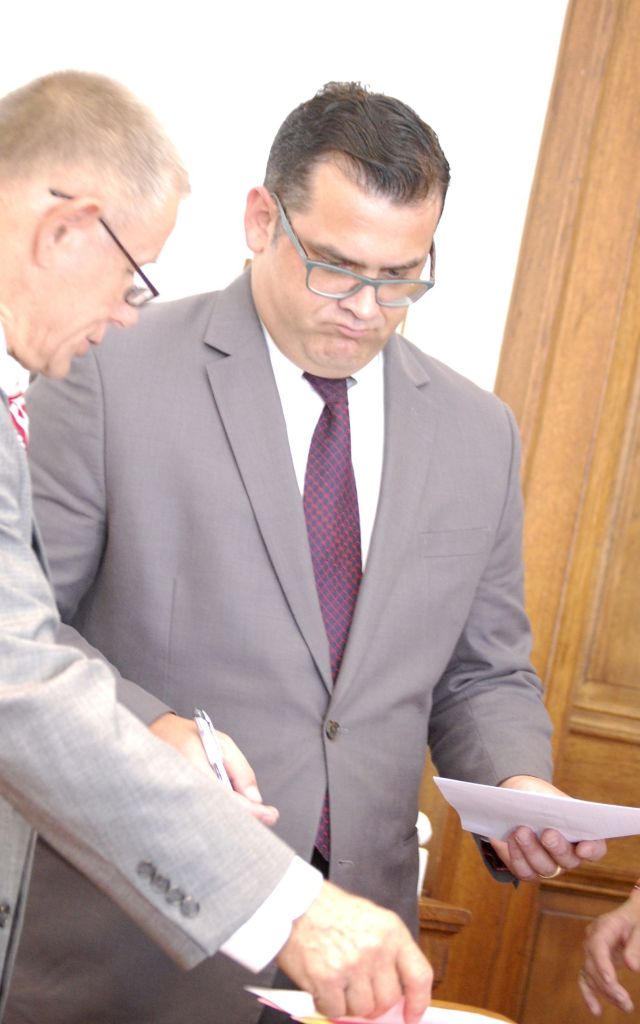 The Rowan County Board of Commissioners on Tuesday hired its second-straight county manager with ties to Yadkin County.
The commissioners chose Michael A. Church, who goes by Aaron and is currently the manager of Yadkin County, during their Tuesday meeting. Church is scheduled to start Oct. 1.
The former manager Gary Page retired Aug. 29 and previously worked as a manager for Yadkinville.
Finance director and assistant county manager Leslie Heidrick was appointed Tuesday to service as interim county manager until Church starts.
Board Chair Jim Sides said Church’s experience played an important role when combing through the list of 13 candidates.
“When someone in this position steps out and decides to take the job, when the board is changing in December, it’s a big chance,” Sides said. “Mr. Church’s experience far exceeded anybody else that we interviewed. I feel like his level of experience, demeanor, way he presents himself and all the things that I look for in a candidate were exactly what (the commissioners) were looking for.”
Church will earn a salary of $125,000 and be paid moving expenses up to $1,000, according to his contract.
Outgoing county commissioner Chad Mitchell came in second place, according to Sides and board Vice Chair Craig Pierce.
“(Church) has been a county manager for nine years; Chad has never been a county manager,” Sides said. “The level of experience in and of itself set him out way ahead.”
When the county commission went into executive session Tuesday to make a final decision on the county manager, Mitchell didn’t participate. The commissioners left their second floor meeting room and Mitchell remained in his seat. Sides said Mitchell didn’t participate in any part of the hiring process because he was an applicant.
Though Mitchell was second among the list of candidates, Pierce said the vote, at one point, was deadlocked at 2-2. Pierce used the relatively small size of Yadkin County as one reason for voting against Church.
“It’s no reflection on (Church’s) capabilities, but I wanted somebody from Rowan County,” Pierce said. “I thought Mr. Church’s learning curve would be awful steep. Realistically, I guess you’d say the techniques are the same, but not knowing how the different moving parts in this county work is quite a large thing to have to learn.”
“The truth is that there was another vote for Chad,” Pierce said. “The other commissioner conceded to vote for Mr. Church only because they wanted to go ahead and get the manager in place.”
Pierce declined to provide the name of the other commissioner because discussions happened in closed-to-the-public meetings.
Pierce said familiarity with Mitchell didn’t play any part in his vote. Being a Rowan County native with Rowan County and 12 years as a commissioner was a deciding factor, Pierce said.
“What we are trying to accomplish here in the county requires tremendous cooperation between the commissioners and our manager,” Pierce said. “We really needed someone who could hit the ground running and get the job done in my opinion. I don’t go fishing with Chad, I don’t go to his house and watch football games, but it just came down to having a working relationship that I’m comfortable with.”
Pierce said Mitchell was also willing to take a lesser salary than Church’s $125,000 figure.
Mitchell did not run for re-election on the Rowan County Board of Commissioners.
Contact reporter Josh Bergeron at 704-797-4246.